'What fascinated me always was Alyque's ability to think in the vernacular despite his South Bombay and genteel upbringing,' notes Sandeep Goyal.
'Lalitaji or Hamara Bajaj were obviously not birthed in the hallowed environs of the Bombay Gymkhana.' 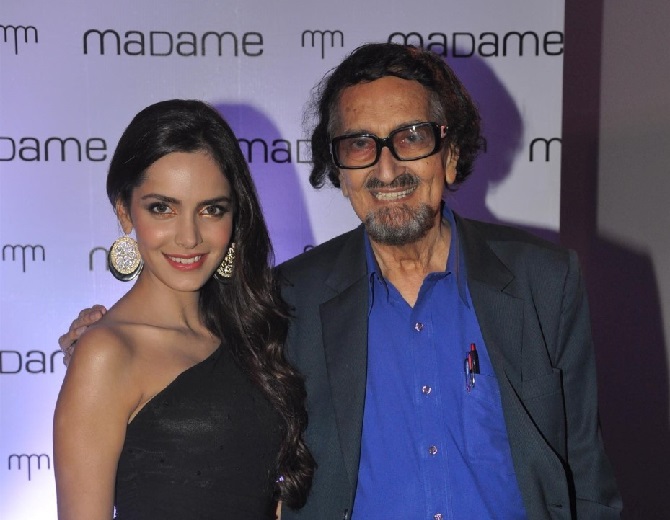 IMAGE: Alyque Padamsee with his youngest child Shazahn Padamsee at a fashion brand launch in Mumbai.

Some years ago when the Advertising Club of Mumbai conferred the 'Advertising Man of the Century' award on Alyque Padamsee, there was not even a murmur of dissent. In fact, there was overwhelming unanimity on his choice for the honour.

I was there at the awards function. Padamsee was praised, loved, hugged, kissed, venerated and deified, much like I had never seen done before to anyone in Indian advertising.

It was not just touching, it was overwhelming.

But it is Alyque Padamsee, sometimes also called the 'Brand Father of Indian Advertising' -- the advertising genius, the maestro of brand success -- that will remain Alyque's longest lasting legacy.

Padamsee created Lalitaji for Surf, Cherry Charlie for Cherry Blossom Shoe Polish, the MRF Muscle Man, the Liril girl in the waterfall, the Kamasutra couple, Hamara Bajaj, the TV detective Karamchand, the Fair & Handsome brand ... over a hundred brands benefitted from Alyque's astute understanding of consumer insights, and gained his indelible stamp on their advertising, making it memorable and impactful.

So how was Alyque different?

He was first and foremost a showman at heart. And that is the trait that differentiated him from his peers in Indian advertising.

His ad campaigns, much like his theatrical performances, had a strong element of characterisation: Strong, memorable characters that got deeply etched into the minds of consumers.

Lalitaji or the Liril girl: Each of them epitomised the brand they represented. In fact, to the consumer Lalitaji and the Liril girl were soul of the brand; the physical product was only a manifestation of that image already created by Alyque and his Lintas team.

Add to that Padamsee's story-telling skill.

Lalitaji was not just a character. She was a narrative in herself. Each dialogue of hers was remembered, in fact repeated by customers. Lalitaji, like her creator, was not just a brand spokesperson, she was a cult. So was Hamara Bajaj.

The sensual Liril girl was again a Padamsee masterpiece. The waterfall, the music, the half-nude-half-drenched girl, the sheer ecstasy and enjoyment of the shower elevated a soap to a soap opera in 30 seconds!

The lesser talked about dimension of Padamsee is his intense competitiveness as an ad-man. It was in the late 1980s, would have been 1988 or 1989, that Alyque as the CEO of Lintas started to race HTA (now JWT) for the top spot in Indian advertising.

I was then still a young rookie in the business. But I can still recall the day he proclaimed Lintas as No 1 on billings in India.

There were many long faces at HTA. There was debate, there was denial. That debate remained kind of open for many years till HTA surged ahead and back to its No 1 position. But Alyque Padamsee had by then proved his point.

What fascinated me always was Alyque's ability to think in the vernacular despite his South Bombay and genteel upbringing.

Lalitaji or Karamchand or Hamara Bajaj or the need for a Fair & Lovely like product were obviously not birthed in the hallowed environs of the Bombay Gymkhana. They were the output of a mind that observed, absorbed, analysed, reinterpreted and created new thoughts, new personas, new breakthroughs.

I never had the good fortune of working with Alyque at Lintas. It will always remain a regret. But over the years, I got to know him decently well one-on-one.

He wrote me a really nice message after I signed my JV with Dentsu many years ago, wishing me a great innings as an advertising-entrepreneur saying the advertising profession needed 'more spirit'.

My last interaction with him was a warm hug post one of Rael Padamsee's shows; we said we would meet for lunch and discuss content-in-digital.

Alyque Padamsee belonged to another generation, another era. An era when clients loved and respected their agencies for what agency folks did best: Create great advertising, build great brands.

Padamsee was the doyen of that generation. Unparalleled in his genius. Unmatched in his prowess. 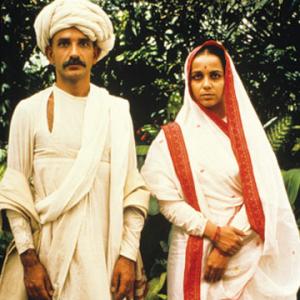 Alyque on playing Jinnah in Gandhi