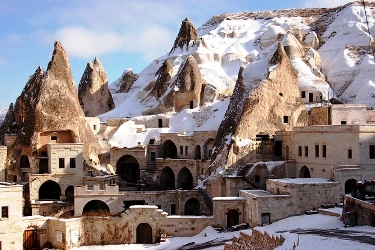 Image: The Cappadocia region of Turkey draws in hordes of amazed tourists with its whimsical landscape filled with fairy chimneys into which the buildings, including hotels, are carved.
Photographs: Curious Expeditions

Tourism has always been an important part of any economy and money earned through it contributes a substantial amount to any country's exchequer.

Those bitten by the travel bug always look for novelty and innovations across their travel path.

To cater to them, some hoteliers built some weird structures in many parts of the globe.

Matadornetwork.com recently came up with a list of 9 weirdest hotels around the world. 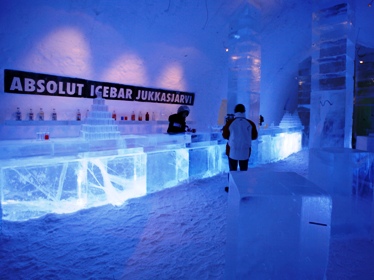 Image: A bartender mixes a drink in the bar of the Ice Hotel in Jukkasjarvi, northern Sweden.
Photographs: Bob Strong/Reuters

Built every winter only to melt in the spring, Ice Hotel in Sweden is constructed entirely from ice and snow; that includes the walls, fixtures, and furniture.

Tourists beating a trail to Sweden's far north to sleep in the vast igloo are creating jobs in this depressed region. Travellers Zac Grimes, 21, of Melbourne (left) and Jason Helgren, 31, of St. Paul, Minnesota (right) use their computers at the Traveller's Cave Hotel in Goreme, Turkey.

Cave hotel has 10 cave rooms, a social room and a restaurant.

Besides its unique design and cosy rooms, the hotel has a magnificant view to the Ortahisar old village with its surrounding valleys. Regarded as Sweden's most primitive hotel, the Forest Hut Hotel aka Kolarbyn eco-lodge, is set in dense forest by the beautiful Lake Skarsjon, just two hours from Stockholm.

There's no electricity in these 13 cosy little huts.

For a nominal fee, travellers in Kolarbyncan be left to fend for themselves while roughing it in a rustic forest hut. These bright orange mod pods anchored in The Hague were part of an art project before being capitalised on as adventurous getaway.

Packages range from basic survival with a sleeping bag and food rations to something a bit more James Bond-esque. In special discount hotels in Japan, guests stow their luggage in lockers, then buy automated tickets to little cubicles that leave enough room for bedding and television monitor. The Utter Inn is a floating hotel on Lake Malaren in Sweden.

The building floats as a solitary island and beneath the surface lies a bedroom with a panoramic underwater view. Nine centuries old and originally the historic residence of Empress Matilda, the Oxford Castle in Oxford, England has also been a prison.

Now, it's a hotel and shopping complex. The rooms are constructed from repurposed, incredibly robust drain pipes.

Sanitation, breakfast and other hotel facilities are obtained from existing public infrastructure.

Hence, it is possible for the hotel authorities to work with the simple, user-friendly 'pay as you wish' system.

'Pay as you wish' is a system where customers leave a Euro amount that they can afford and with which they wish to support the project.

Therefore, a night in the hotel costs just as much as one can afford or want to pay. 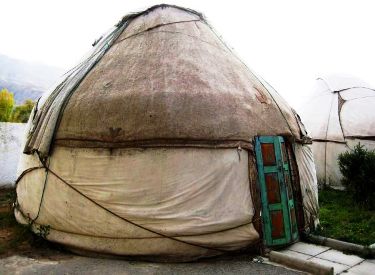 Yurts are traditionally used by Turkic and Mongolic nomads in the steppes of Central Asia.

A yurt is more home-like than a tent in shape and build, with thicker walls.