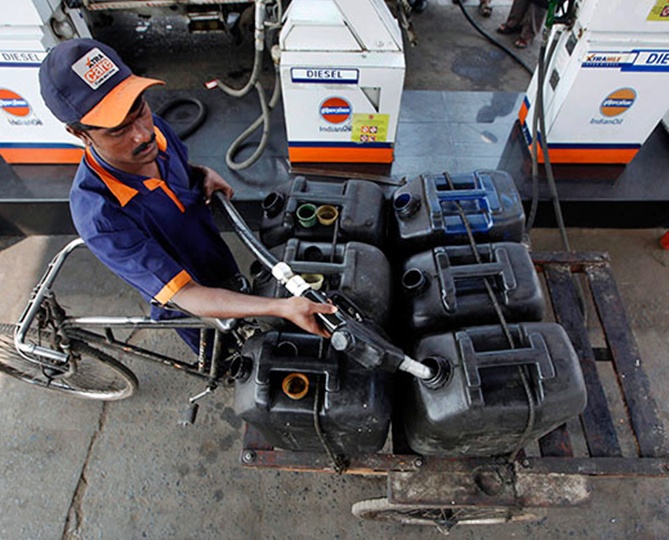 Far from reducing inflation, some of the assumptions made in the Budget imply that the government is not at all expecting prices to come down, says Paranjoy Guha Thakurta.

If there were some who were expecting Finance Minister Arun Jaitley's maiden Budget to unveil a series of proposals that would curb inflationary pressures in the economy, they are certainly going to be disappointed.

Far from reducing inflation, some of the assumptions made in the Budget imply that the government is not at all expecting prices to come down.

On the contrary, there is every reason to expect that inflation will persist, and stubbornly so. Here's why.

Diesel prices are expected to rise. So might the price of cooking gas. The reason is that while the government is unlikely to hike kerosene prices, what Jaitley has assumed in his budget is that subsidies on petroleum products will come down by roughly Rs 22,000 crore (Rs 220 billion) during 2014-15.

This target of the amount that will be spent on fuel subsidies during the current fiscal year can be achieved only if the prices of diesel and liquefied petroleum gas are allowed to creep up gradually. 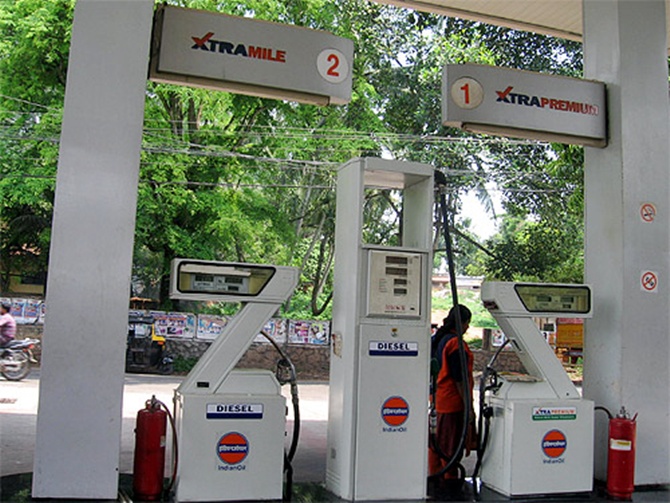 The government had deregulated petrol prices in 2010. However, the prices of diesel, kerosene and LPG remain officially administered.

In mid-June, it appeared that if the price of diesel was allowed to go up by a rupee or two per litre over the next few months, its price would be more or less on par with prices in international markets.

At that time, world crude prices were barely $100 a barrel. However, the unrest in West Asia has resulted in oil prices hardening. If the turmoil in Iraq, Syria and the Gaza Strip worsens, there is every chance that oil prices may rise.

India has been fortunate that crude oil prices have not gone up very much over the last two years.  But the situation could change. 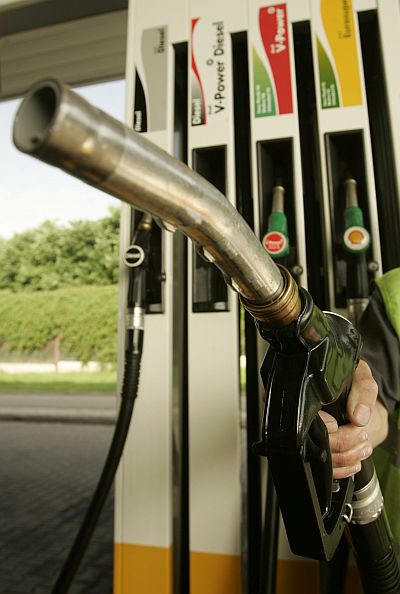 International oil prices had touched $115 a barrel in the third week of June, the highest in nine months, before declining.

Oil prices have gone through phases of extreme volatility. For example, in 2008, crude oil prices jumped from $40 a barrel to $147 a barrel before collapsing again to $40 a barrel.

Through 2009 and 2010, prices rose steadily to around $ 90 a barrel before spiking to a 30-month high of $ 120 a barrel in February 2011, after the Arab Spring began with the ouster of governments in Tunisia and Egypt.

At the end of June, the total annual subsidy outgo of the government of India on diesel and cooking gas -- euphemistically called "under-recoveries" by oil companies to signify the difference between what is claimed to be the cost of production and the selling price -- was in excess of Rs 1,00,000 crore (Rs 1 trillion).

The "loss" per litre of kerosene sold was Rs 33 while the corresponding figure for a cylinder of LPG was approximately Rs 450. 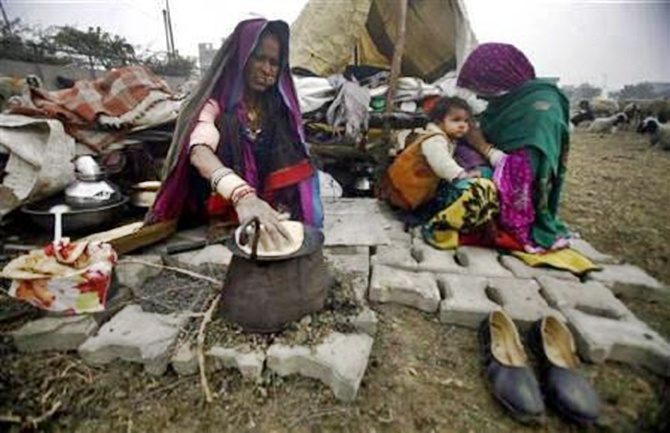 Kerosene is meant to be used by the poor for cooking and lighting. Large quantities of the fuel are illegally diverted to adulterate petrol and diesel -- because of the large difference -- and also smuggled out of India.

Nevertheless, the government may choose not to increase kerosene prices as this would make it especially unpopular.

Importantly, diesel is the main fuel used for transportation. Higher diesel prices have a cascading impact on the prices of a very wide range of articles of mass consumption, especially food items. 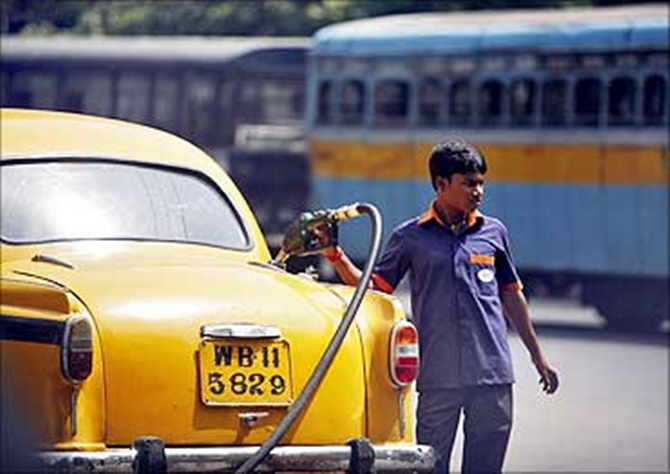 Total taxes on petrol are more than half its selling price and over 30 per cent of the price paid by a consumer of diesel is in the form of taxes.

Excise duties on petroleum products contribute over 40 per cent of the Indian government’s total collections of excise duties.

Importantly, customs and excise duties on crude oil and petroleum products are ad valorem or a percentage of value, which implies that tax revenues go up as prices rise, which is good for the government but bad for the consumer.

Oil imports account for approximately a third of India's total imports and a similar proportion of the country's imported crude oil comes from countries located in and around the Persian Gulf region in West Asia.

Even if one assumes that oil prices will remain stable, what cannot be denied is that the government is not expecting inflation to come down significantly, if the budget numbers are to be believed. 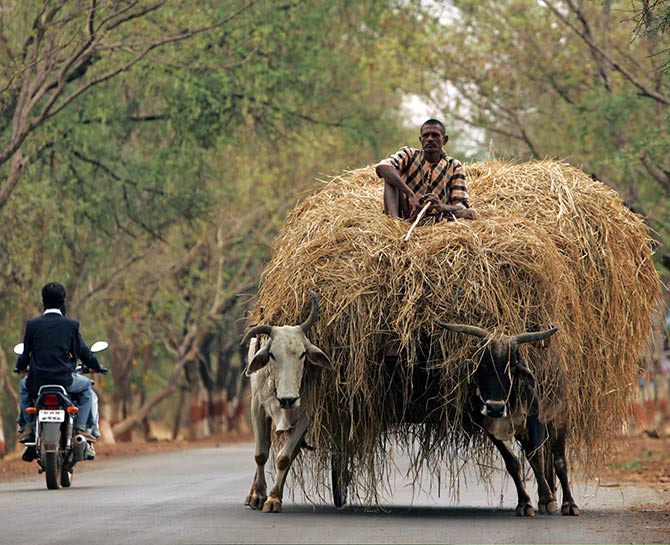 Jaitley's budget has assumed that the country's gross domestic product will grow by 13.4 per cent in nominal terms during the current year that will end on 31 March 2015.

Since the GDP deflator is closely aligned with the wholesale price index, what the budget arithmetic signifies is that the average annual inflation rate will vary between 7.5 per cent and 8 per cent.

Inflation is already hovering at this level. Does this not mean that the government is not expecting inflation to come down? The answer is obvious.