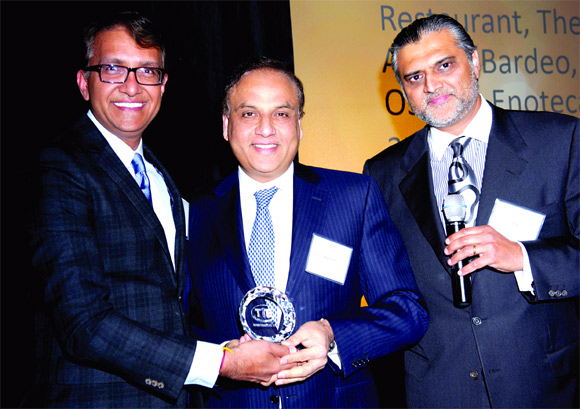 The Washington, DC Chapter of The Indus Entrepreneurs recently honoured three pioneers in information technology, the restaurant business and mobile technology - Ranvir Trehan, Ashok Bajaj, and Dr Raj Singh - in the DC area with its first Tie-DC Legends Awards at a glittering gala at The Barns at Wolf Trap Center for the Performing Arts.

Trehan founded Seta Corporation, an IT services company serving federal government agencies, in 1987 and served as its chairman and chief executive officer until the company’s acquisition in 2004.

Since then he’s been a venture capitalist and angel investor, and a philanthropist. Along with serving on the boards of several charitable and cultural organisations, he also serves at his Trehan Foundation along with wife Adarsh, funding projects in the United States, Africa and India, including his alma mater, MichiganUniversity and leading DC think tanks.

Bajaj, who in 1989, founded Knightsbridge Management in DC, is the chairman and CEO of this privately held company that oversees the operations of his award-winning restaurants where several Presidents and First Ladies and their families have dined, starting with The Bombay Club to a string of others that followed, including the 701 Restaurant, The Oval Room, Ardeo-Bardeo, Rasika, Bibiana Osteria-Enoteca, Rasika West End, and nopa Kitchen-Bar.

Singh founded LCC International in 1983 and provided engineering designs for many early cellular networks in the US and more than 30 other countries.
He also held cellular licenses in Latin America and India and brought wireless service to those markets, In addition, he founded Appex, one of the first American wireless roaming clearinghouses.

To introduce them Prashant V Boccasam of Novak Biddle, Tie-DC’s, outgoing president, called on three of the ‘legends’ protégés and close friends - fast becoming legends themselves - to do the honors led by Dolly Oberoi of C2TI Technologies, who was the first female president of TiE-DC. 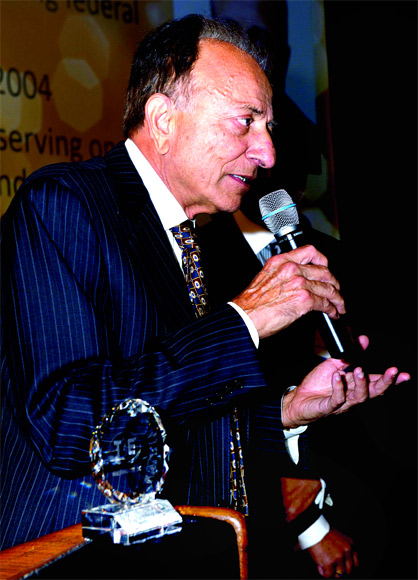 She lauded Ranvir Trehan for being her first mentor and the one who inspired her to start her own business when she couldn’t land a job: “I came to Washington with a fancy degree, but I couldn’t land myself a job and so I ended up starting a business,” she said.

“At that time there were a few Indians who were doing really well in the IT sector, and Ranvir was one of them. So he has been an inspiration to a lot of us in this town.”

“He is not only a technologist, but he is also an entrepreneur and a philanthropist, and as chairman of the Trehan Foundation, he has a passion for giving back. Ranvir is indeed, a man with a large heart who firmly believes that if one has a passion, then he has a mission to contribute.”

Trehan besides thanking his wife and family for his success, thanked “America for the access it provides for foreign-born people, the merit it always values and also the little element of help that it requires. All of those things help.”

“The University of Michigan was so good to both of us (he and his wife Adarsh),” he said. “We both had fellowships and assistantships and the university knew we were going to leave to go back to India after our post-graduates degrees, but they gave us assistantships and it always makes us so grateful.”

When asked for one word he would use to describe the recipe for success young entrepreneurs should aspire to, he said, “It happens only when you have a passion for something - every morning when you wake up and that’s what you want to do, then you are going to excel, So, excellence, and then being generous and compassionate with your fellow workers and establishing a relationship of trust, I would say are the key factors behind success.”

Sanju Bansal, co-founder, MicroStrategy, and chairman, Sanju Bansal Foundation, which supports among many others the PBS NewsHour, spoke of Bajaj and his entrepreneurial instincts that led to the success with The Bombay Club and Rasika, recently named one of the top 20 restaurants in the United States.

Boccasam too toasted Bajaj’s entrepreneurial spirit that led him to start the first caviar bar, the first wine-bar and “many other really neat things in DC, which didn’t exist before.”

Bajaj said it was especially significant to receive the award from Bansal, who he had known for years and whose career he had followed, and - to much laughter added – “invested money in (his company).” 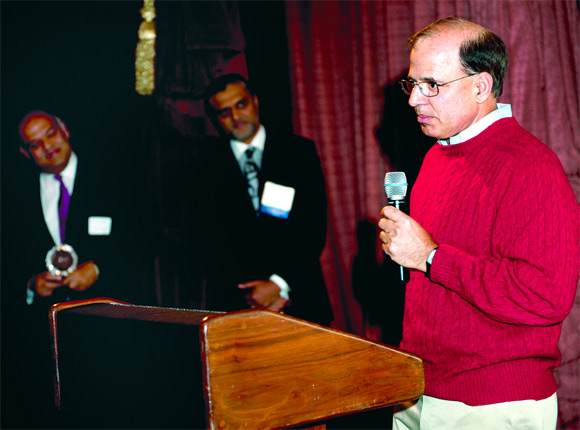 Piyush Sodhi was called on to present the award to Singh, his first boss.

“Raj, I’ve known you since 1990,” he said. “The first time I went to LCC for an interview, I fell in love with the company, for two reasons. First, I loved the people, and specifically, Raj and his lovely wife Neera, and secondly, the office was situated on top of Bombay Tandoor and so during lunch the aroma of the food started wafting and I got sold on the location.”

‘When I was driving here,’ he said, ‘I looked up the word legendary and there are many, many definitions and I found that many described Raj. But one that resonated with me was luminary. ’

He hailed Singh’s pioneering spirit: “If you think of the impact that mobile technology has had over the years - to check our e-mails and things - Raj has been involved with these technologies since the mid-80s and even before that, and has truly pioneered a lot of research on that. He built a phenomenal company and since those early days, I was honored to be a small part of LLC as the company was growing.”

“Today, when you look at all the stats of what mobile communications is — 6.5 billion people worldwide are impacted by it - I would say, you can most probably count on a single hand the number of people who have impacted the movement of that technology and what it has become. I’ve seen this fine man involved from professor, to operator to business owner to ultimately spectrum owner to now golfer, I think, and a few other things.”

Singh said, “The trick in life is to always hire people who are smarter than you and Piyush is really one of them.”

He applauded the work TiE was doing and added, “The Indian-American community is finally coming around and we have a tremendous number of entrepreneurs and it’s delightful to see that.”

Earlier, in his address, welcoming the Indian-American entrepreneurial heavyweights in the DC area, Boccasam had spoken about the speakers TiE-DC had hosted in the past year, and The Young Entrepreneur Contest, which drew competitors from over 14 countries, as one of the most fulfilling TiE-DC projects of 2013.

“There were school kids competing at a global level of building a global business and what was absolutely amazing was that these firms had built an actual prototype of business that these young entrepreneurs would go on to build,” he said.

“What is gratifying is when you get mails from high-schoolers now admitted to some of the leading Ivy League schools thanking us for being such good mentors and catalysts in their success to whether it be at Wharton, Yale, Princeton, or Harvard… Some of these young entrepreneurs have already got funded and five of them have already registered patents.”

He said the rationale for the Legend Awards he had instituted was not only to honor risk takers and recognise their work and success, but also their contributions in giving back to the community.

Boccasam hoped that the awards would become a tradition honouring “other CEOs who’ve taken risks during a generation when entrepreneurship wasn’t well known - in the 60s and 70s when it was really hard to be an entrepreneur and be successful and really grow a business.”