Sign in  |  Create a Rediffmail account
Rediff.com  » Business » There seems to be no end to India's mining woes 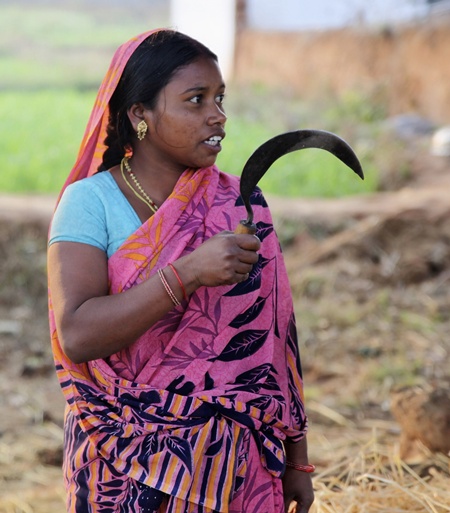 What happens at Mahan could determine if anti-mining campaigns will increasingly seek a legal recourse under the new law, underscoring a new twist in the challenges facing India's quest for energy security and its industrial future.

With an axe on one shoulder and lugging a large log over the other, Bhajandhari Kushwaha emerges from the dense Mahan forest in central India with his dog by his side after a day of foraging and wood cutting.

For Kushwaha, the timber, leaves and seeds of this centuries-old forest not only sustain his family of five, they represent a vital part of his community's cultural identity that has suddenly come under threat from two of India's largest mining companies.

"This forest is our life. We get everything from it," says the 45-year-old, vowing to fight plans by Mahan Coal Ltd (MCL) - jointly owned by London-listed Essar Energy Plc and the Aditya Birla-owned Hindalco Industries Ltd - to mine part of the 1,000-square-km (385-square-mile) woods for coal.

"Whatever compensation the company is offering us, we do not want it. We will fight until we die, if that's what it takes."

It is a sentiment shared by many villagers in this dusty corner of Madhya Pradesh, a sign of growing popular resistance spurred by a new forest law that gives people a greater say over how natural resources are exploited.

What happens at Mahan could determine if anti-mining campaigns will increasingly seek a legal recourse under the new law, underscoring a new twist in the challenges facing India's quest for energy security and its industrial future. 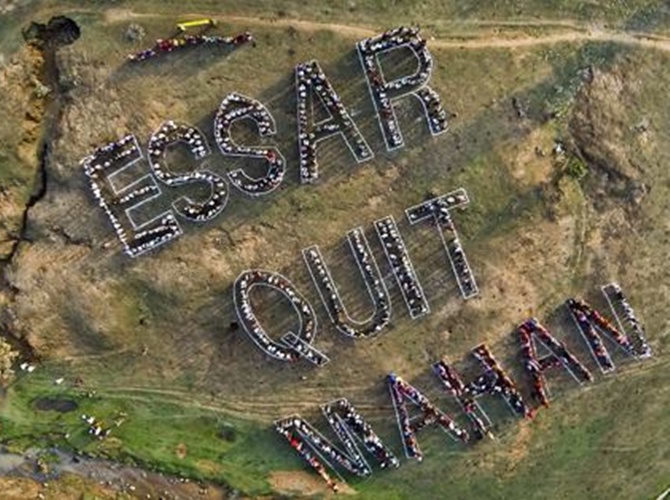 A thicket of approvals

In January, London-listed Vedanta Resources Plc lost a seven-year battle to dig bauxite in Odisha after the Supreme Court ordered that local tribespeople should decide on the project. The villagers voted against it.

The government accepted the decision even though Vedanta, had already spent more than 500 billion rupees on an aluminium refinery, smelter and power plant in anticipation of access to local mines. The company has been forced to bring in bauxite from the neighbouring state of Chhattisgarh.

In Mahan, MCL was granted environmental approval last month to extract around 100 million tonnes of coal.

Essar and Hindalco have already invested $3.2 billion building a power plant and a smelter that will run on locally mined coal.

But local resistance, led by environment group Greenpeace, could still derail the coal mine project, affecting the economic viability of the power plant and smelter. 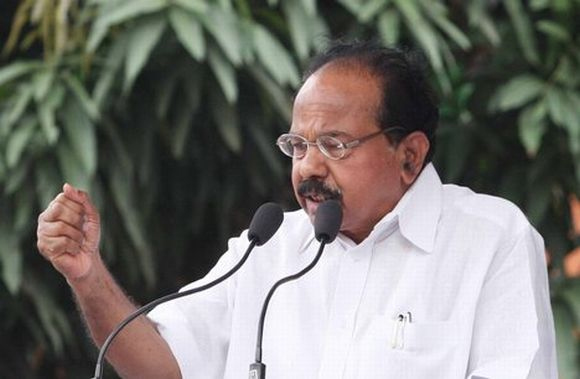 The final forest clearance for MCL came from environment minister Veerappa Moily, who in less than three months in the job has approved more than 70 big-ticket projects worth over $40 billion, some of which were stalled by his predecessors over green concerns.

Moily, who is also the oil and gas minister, has been criticised by environmentalists who accuse him of acting in haste to mollify industrialists who complain that approval delays are strangling economic growth.

Greenpeace says MCL's project will fell hundreds of thousands of trees and affect the livelihoods of 14,000 people who sell products such as mahua seeds and tendu leaves, used to make cheap alcohol and hand-rolled cigarettes respectively.

MCL says only about 4,500 people will be affected and they will be compensated for as long as they live for lost income.

"There are a lot of phantoms over social and environmental concerns that are being created about this project," says MCL's chief executive, Ramakant Tiwari. "I personally believe that sustainable development is possible." 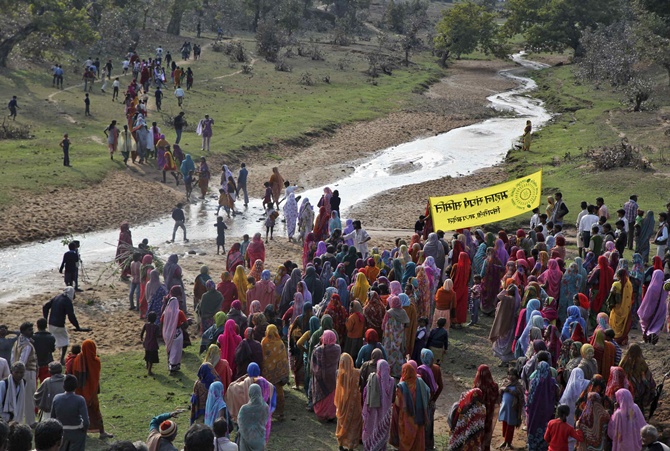 Image: Villagers walk towards the Mahan forest during a protest against a coal mining project in Singrauli district in Madhya Pradesh.
Photographs: Nita Bhalla/Reuters

Only one percent of Mahan will be cleared and a massive reforestation programme will be undertaken to regenerate the woodland, he told Thomson Reuters Foundation at a site office.

But there are fears that the MCL project will open the doors to the mining of the entire Mahan forest, a concern raised by environment minister Moily's predecessor when he put it on hold.

Besides MCL, seven other coal mines are proposed across Mahan, including one by Reliance Power Jaypee group also has an operating coal mine in the area.

India's mining sector has been at the centre of a multi-billion-dollar corruption scandal after the government's opaque and discretionary mining rights allocation system was questioned by the country's top auditor. The furore slowed decision making in the sector and put a brake on mining. 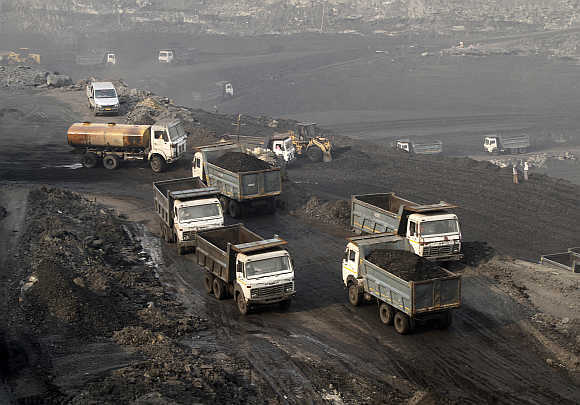 India is desperate for power and coal is expected to remain at the heart of its energy security for decades. Government-controlled Coal India Ltd has not been able to mine fast enough, forcing power producers to import costly coal from Indonesia, Australia and South Africa to bridge the shortfall.

Seventy million households - 35-40 percent of the country's 1.2 billion people - have no access to electricity.

In 2012, a blackout left over 600 million people in northern India without power for nearly two days, exposing Asia's third-largest economy and an aspiring global power to international humiliation.

"It's a painful paradox for me," says Tiwari. "Nearly one-third of our domestic production is imported from outside, despite India having the fourth-largest coal reserves in the world."

The project, he says, will not only bring in millions of dollars for the government, it will also bring skills, jobs and better infrastructure to a backward area. 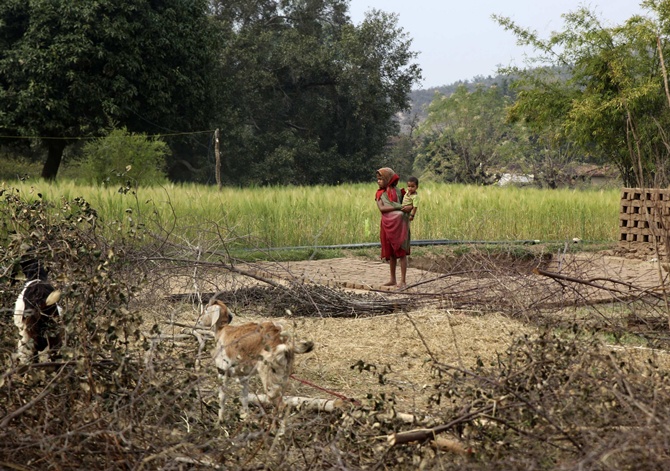 Our Forest, Our Right

The tussle over Mahan has divided the local community.

In Amelia, the largest of the affected villages, some wealthier, higher-caste villagers want the coal mine and have already sold land to MCL to build its offices.

"I want the same life for my children as they have in the cities," says Amelia's village head, Santosh Singh, who sold off some of his land and got jobs for his family at MCL. "I have no interest in the forest. Those who want to fight the company can go and hang themselves from the branches of the trees in Mahan forest if they want."

But Singh may be in a minority against Amelia's poorer residents where mistrust of corporations runs deep, partly due to an unfulfilled earlier promise to provide jobs at Essar's power plant.

Painted on the mud-and-brick walls of many homes, Hindi slogans read "Our forest, our right." 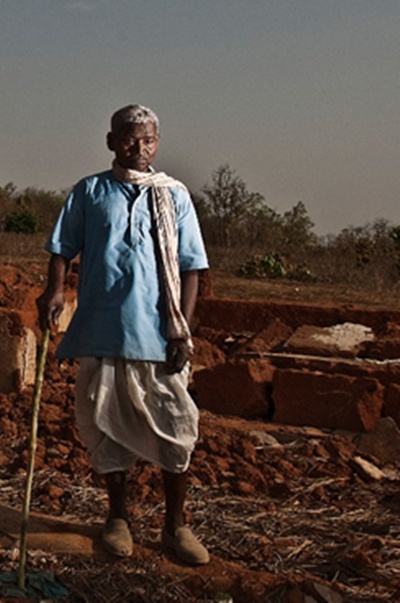 Image: Inhabitants say clearance was given to the project in violation of the Forest Rights Act.
Photographs: Courtesy, Greenpeace

Inhabitants say clearance was given to the project in violation of the Forest Rights Act, a 2008 law that gives affected communities a right over the forests.

A village vote in Amelia supporting the MCL mine was rigged with hundreds of forged signatures, they say. The company said it had no say in the vote, which was conducted by the village head in the presence of government representatives.

Still, the allegation has forced district authorities to launch an inquiry, which is due to completed at the end of March. The outcome could scupper the project.

"If the majority is not with the resolution then, at my level, I would report to the government that mining should not be done in this area because it is a legal right of the people," said M. Selvendran, the top government official in Singrauli district, which covers the Mahan forests.

Selvendran recommendations will go to Madhya Pradesh state's mining department, which is responsible for granting leases to companies - the final clearance required for a mining project.

In a show of strength last month, hundreds of men, women and children from Amelia and surrounding villages gathered on the fringes of Mahan forest to demonstrate. Arranging themselves in lines, the crowd formed three words: "Essar quit Mahan".

"We are poor people but we are not afraid to take on these big companies," said villager Kripan Nath Yadav, comparing the battle against Essar and Hindalco to India's fight for independence from British colonisers almost 70 years ago.