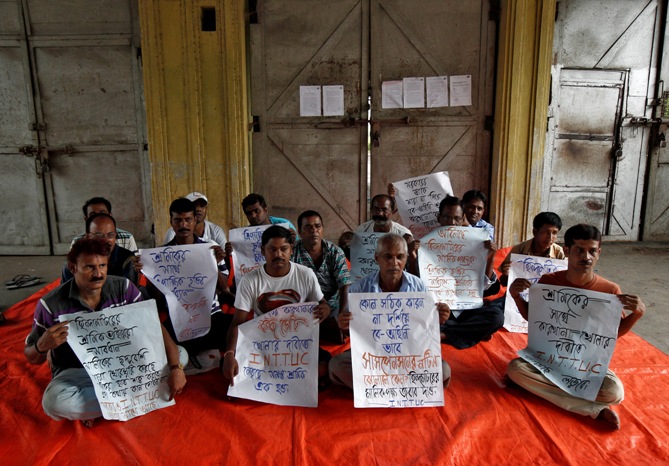 Pain and hopelessness were written all over the face of Surinder Kumar Rai as he ambled out of the closed gates of Hindustan Motors Limited’s plant at Uttarpara in the outskirts of Kolkata.

The company on May 24 declared suspension of work at this unit, popularly known as Hind Motor factory.

The town was seeing a heavy downpour after weeks of sweltering heat.

Rai took out an unkempt handkerchief from his pocket to wipe his head off before settling himself on the bench at a tea-stall run by one Sharmaji just opposite the factory gates.

His face carried a story of despair.

Rai has been visiting the factory relentlessly ever since suspension of work at the plant was announced on May 24.

“I am in my late 50s. I served HM for 18 long years at the company’s engine division.

“I have not been getting any pay for the last six months.

“Though my family members said the job held no hope, I did not want to believe them.

“They were so right, you see!”

Rai was drenched and we offered him tea and biscuits.

Tears rolled down his cheeks.

“I am due for retirement in the next couple of years.

“I don’t think I will get the provident fund or such other dues.

“I am up to my neck in debts and don’t know how to repay”.

Rai’s family of four at present is solely dependent on the salary that his son earns from a non-descript job in Kolkata.

“When I was young, my parents told me, ‘a job in a car factory is very lucrative’.

“Parents are never wrong, they say. Then, how come I am a pauper now?” 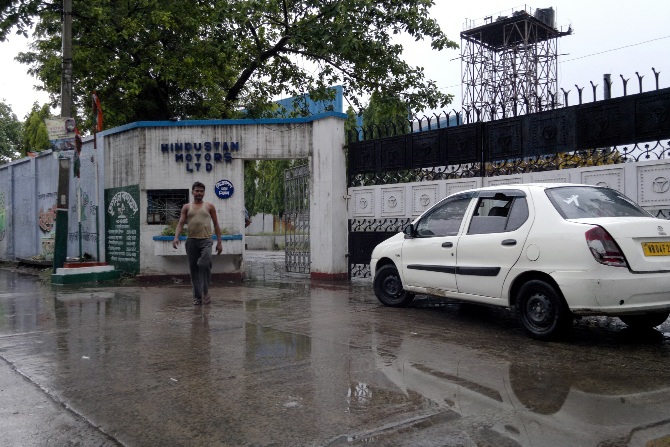 ‘We are starving but the top-level managers are minting money’

Like Rai, one of the workers B N Jha, is struggling to feed his family.

The last car was manufactured in November, he told rediff.com.

“Machines ‘went dead’ after that,” he said.

“We attended the factory every day only to be served a no-production-day notice.

Left with no alternative, Jha has decided to go back to his ancestral home in Bihar’s Madhubani district and take to farming.

“I made Uttarpara my second home.

“But the plant’s management is rotten to the core.

“We are starving but the top-level managers are still drawing a salary of Rs 200,000 per month.

“They all are on contracts and the company is bound to pay them no matter what.”

Jha was cycling down to the nearby chemist’s with his daughter to get medicine for his ailing wife.

“People at home are worried sick.

“The company is feeding us with lies. For a while, we believed them.

“But now we can’t digest them on empty stomachs,” Jha told rediff.com.

“The company is not allowing the media to depict the true story.

“But how long can they play hide and seek?"

The Uttarpara plant, which employs about 2,700 workers and managerial staff, had been bifurcated from HM's Chennai facility which was recently brought under Hindustan Motors Finance Corporation Ltd. 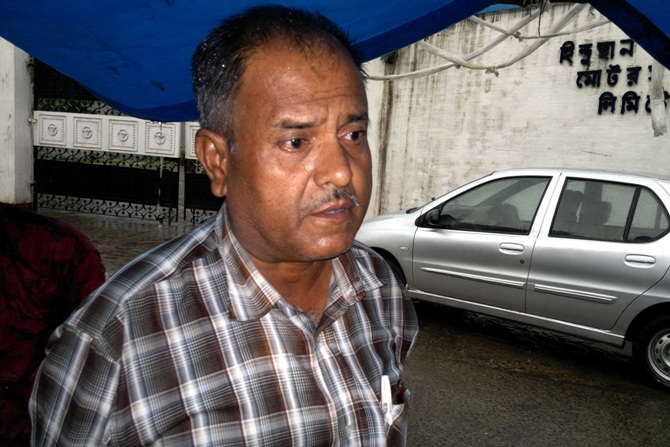 A slice of history

The Hind Motor factory has a long history.

The first and only integrated automobile plant in India, it also manufactured automotive and forged components.

It is the producer of the Ambassador car, widely used as a taxi and as a government limousine.

This car is based on the Morris Oxford, a British car that dates back to 1954.

The setting up of the plant was followed by the establishment of the adjacent Hind Motor railway station by the government. 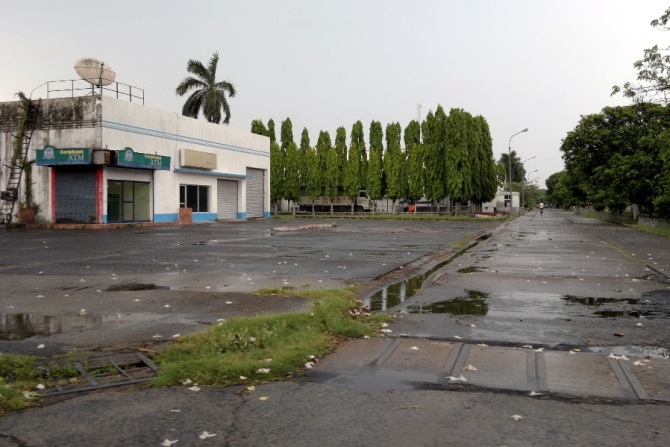 According to media reports, mounting losses, paucity of funds, growing indiscipline, low productivity, were the reasons that led to the plant’s closure.

The suspension of work notice sent across to the stock exchanges states: 'the company has been transparent in sharing updates about the worsening conditions of the Uttarpara unit which includes very low productivity, growing indiscipline, critical shortage of funds, lack of demand for its core product -- Ambassador cars and large accumulation of liabilities.'

It was an open secret that Hindustan Motors was struggling to make both ends meet for years.

Recently, the company announced its plans to rope in a consultant.

Talks about a potential joint venture were also in the air.

The company faced a major setback when it failed to sell its Chennai plant for a sum of Rs 150 crore (Rs 1.5 billion) to its business partner Mitsubishi.

According to industry data, HM managed to sell only about 2,200 Ambassador cars in the fiscal year ended March 2014, a tiny share of the 1.8 million passenger vehicles sold during the year in India. 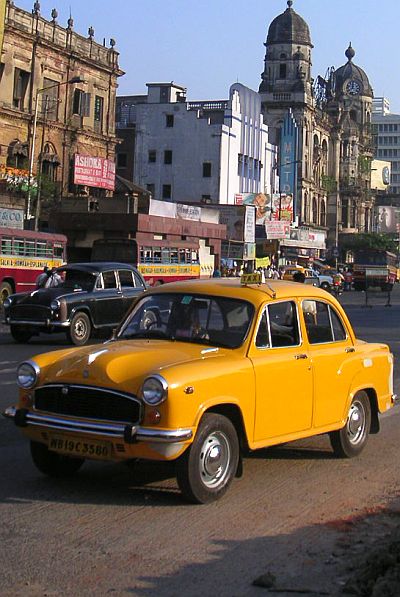 Image: Following the Uttarpara plant's closure, some industry watchers opined that it would be difficult for the 'grand old lady' to make a comeback.
Photographs: Soman/Wikimedia Commons

Is it the end of the road for Ambassador cars?

According to insiders, the projects that the company was working on -- for instance, a turbocharged 1.5-litre BS 4 variant of the Ambassador -- have been put on hold because of mounting losses.

Following the Uttarpara plant’s closure, some industry watchers opined that it would be difficult for the ‘grand old lady’ to make a comeback.

In a recent article published in Reuters, Deepesh Rathore at research firm Emerging Markets Automotive Advisors, said, "In the present shape I don’t think the Ambassador has got any chances of revival".

The company’s annual report published on September 2013 stated, ‘as the accumulated losses of the company at the end of the financial year ended September 30 2013 exceeded its entire net worth, the company will take necessary steps to comply with the legal requirements.’

The suspension of work notice, as it transpires, was the natural fallout. 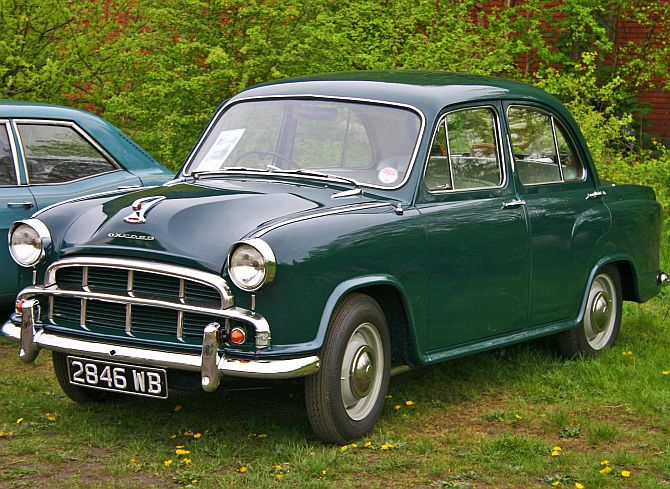 Image: The Ambassador car is widely used as a taxi and as a government limousine.
Photographs: Redsimon/Wikimedia Commons

Though Ambassador brand’s sales steadily went downhill over the years, it never saw any dearth of admirers.

In fact, it was named the world's best taxi by the BBC's popular Top Gear television show last year.

However, journey for one of the country's oldest and most popular cars has not been particularly smooth.

With stiff competition from Maruti 800 by Maruti Suzuki, the ‘king on Indian roads’ started losing steam.

For over a decade, Ambassador cars struggled to stay afloat. 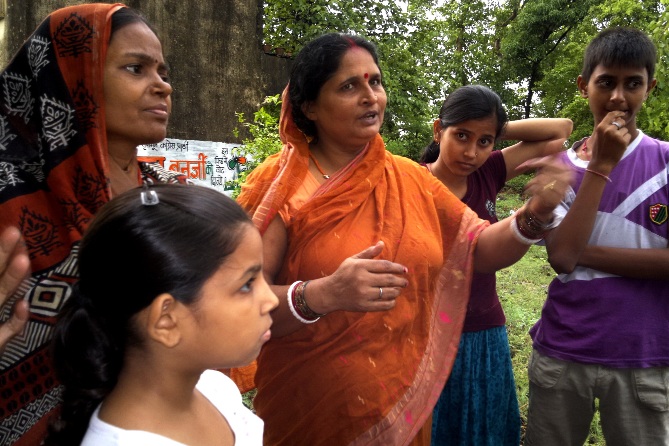 What the company has to say

A Hindustan Motors Limited official, who did not want to be named, told rediff.com over phone from Bengaluru, “Many media reports suggest that suspension of work at Uttarpara plant signifies end of the road for HM’s Ambassador cars.

“This is wrong reportage.

“The current status of the Uttarpara plant can’t decide the fate of the entire fleet of Ambassador cars.

“The plant needed some realignment; hence the company served the notice.”

In a press statement mailed to rediff.com, HM said, ‘Uttarpara plant has been going through tough times in the past few years.

‘The promoters of the company have been funding losses for several years by divesting some of the business units and also monetising some investments.

‘The company’s efforts are falling short of the large liabilities. . . .

‘Given the present circumstances it has no alternative but to declare a suspension of work at its Uttarpara Plant with effect from May 24, 2014.

‘The suspension of work will enable the company to have some space to restructure the organisation, debts, etc.

‘As of today the company has been trying to restructure a running organisation -- the suspension of work will, we are hoping, allow us to focus more on the restructuring.' 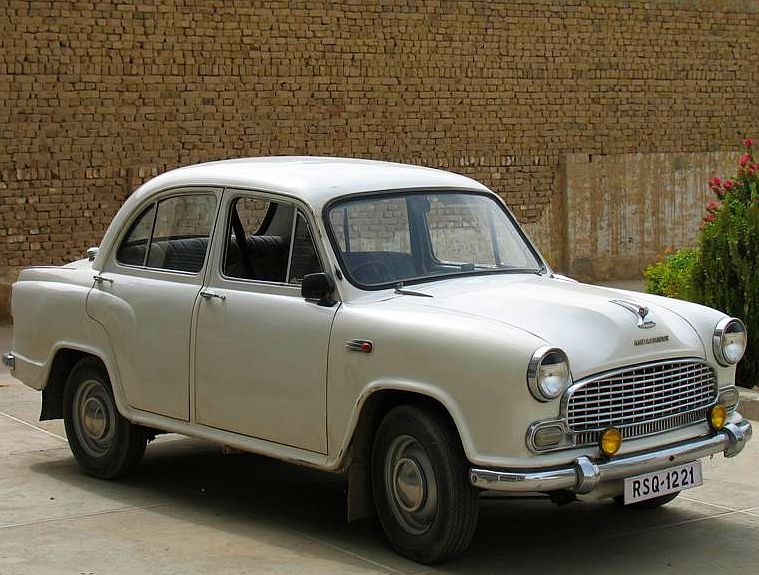 Is there any hope?

When we entered the factory complex on Monday, the silence was deafening.

Apart from a few Central Industrial Security Force personnel manning the gates and driving off the media, there were very few people on the road.

There was no buzz of any activity anywhere.

A huddle of a few women and children stood around the staff quarters close to the factory’s north gates.

The school within the HM complex is reduced to a handful of students at present.

Most of the HM staff’s children aren’t going to school any more, as, ‘there is no money to pay the fees’. 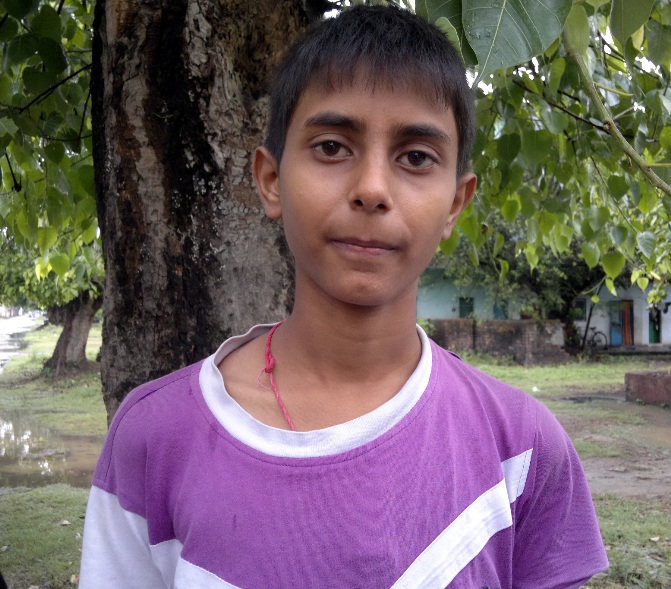 ‘The company is selling the machines clandestinely’

Fifteen-year-old Ranjit Kumar Singh aspired to be a trained ‘workman’ like his father.

“I grew up seeing baba toiling round the clock at this factory.

“He was so dynamic, bubbling with energy all the time,” Ranjit told rediff.com.

“Being unemployed for the last six months, he seldom talks these days.”

Ranjit used to attend school some time back but now he can’t as there is no one to foot the fees.

His mother makes imitation jewellery at home and sells them at the local market.

Apart from the pittance that she earns, the family of six has no other income.

Two square meals a day are a luxury that the family can't even afford to dream of.

“The management is selling the factory’s machines clandestinely at night while it’s sending out press statements in the morning that the plant will reopen soon,” Ranjit said, his eyes seething with anger.

Asked if his charges were true, Ranjit's aunt nodded in approval.

“If you write our story, make sure it has some effect, confirm that someone comes to our rescue,” Ranjit’s mother said as she held my hands.

“Till now, we had heard of factories closing down in and around Kolkata. We had never imagined going through such an experience ourselves.

“Six months is a long time. Since the company’s condition worsened with each passing day, the future holds no hope,” she added.

When rediff.com contacted the HM office and enquired about the reason for suspension of work notice and alleged ‘clandestine sale of Uttarpara factory’s machines’ over phone, the company rubbished the allegations and reaffirmed that the ‘factory will reopen once things settle down’.