Sign in  |  Create a Rediffmail account
Rediff.com  » Business » Why is Indian IT sector crying for a change? 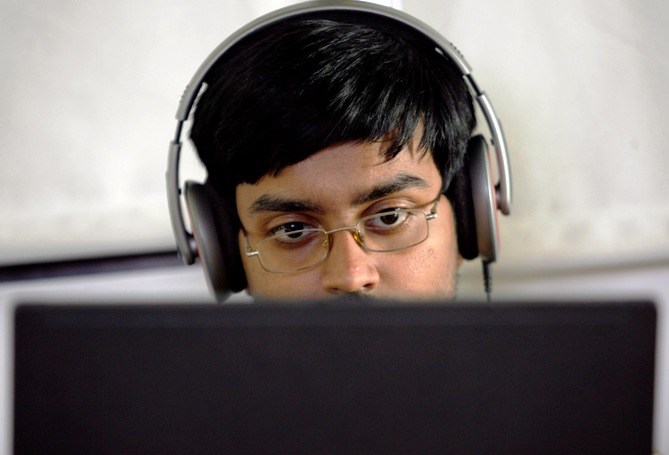 Image: A researcher works on his laptop at the Microsoft India research centre in Bengaluru.
Photographs: Punit Paranjpe/Reuters Surabhi Agarwal and Aditi Divekar in Mumbai

According to various reports, Indian IT firms spend around only around two per cent of their total revenues on research and development against seven-eight percent by North American companies, note Surabhi Agarwal and Aditi Divekar

A glance at this year’s agenda of the National Association of Software and Services Companies’ Leadership Forum will tell you the information technology sector is crying for change.

The first session after the inaugural one was on data analytics and the next on entrepreneurship.

The former is part of the emerging technologies, known as social media, mobility, analytics and cloud, that have consumed the chiefs of companies in the sector as they try to regain their entrepreneurial spirit amid economic challenges.

Top on their minds is to prepare a sustainable blueprint for the future of the sector clocking over $100 billion in revenue annually.

For the next financial year, the sector is expected to add $15-17 billion of incremental revenue, growing at 13-15 per cent. 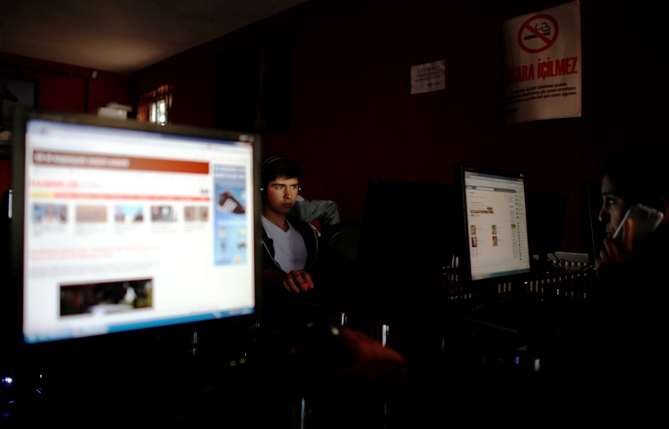 Though that signals robust growth over the year, the consensus among chief executives and experts is that after decades of capitalising on the lower costs and cheaper labour in the country, the sector needs to alter its business model.

Staring at it are challenges ranging from new technologies such as SMAC, saturation of traditional IT spending, regulatory hurdles for offshoring and rise of artificial intelligence.

The latter will further dent the labour advantage enjoyed by India.

“India will have to change its game if it has to maintain its dominance in the technology field,” said Gary Matzusak, global chairman (technology, media and communications) at auditor and consultant KPMG.

Historically, IT services have been India’s sweet spot; now, countries such as China have started rising in this area, he added. 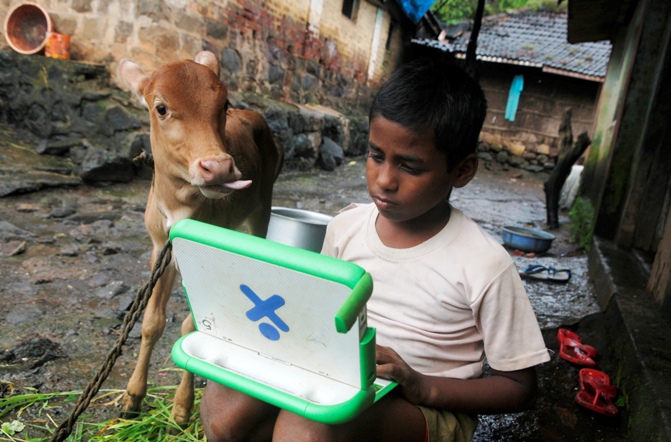 Image: Harish, 11, a school boy uses a laptop provided under the 'One Laptop Per Child' project by a non-governmental organisation as a calf stands next to him, on the eve of International Literacy Day at Khairat village, about 90 km (56 miles) from Mumbai.
Photographs: Danish Siddiqui/Reuters

According to a report by KPMG, India’s IT and business process outsourcing sector will have to depend on innovation to achieve its projected growth of $300 billion by 2020. Creating, managing and monetising intellectual property is expected to drive the industry in the coming decade.

According to various reports, Indian IT firms spend around only around two per cent of their total revenues on research and development against seven-eight percent by North American companies.

Pradeep Udhas, head (IT and IT-enabled services), KPMG India, said: “It is a Catch-22 situation.”

Most Indian IT companies are listed and the markets expect a certain level of profits.

“If the companies invest towards innovation and in turn report lower profits, the markets don’t realise the long-term perspective and react negatively.” 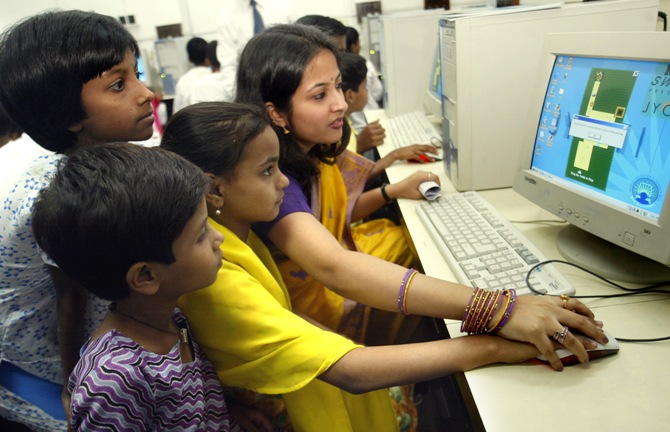 Image: A trainer teaches Indian children how to use the computer in Kolkata.
Photographs: Sucheta Das SD/FA/Reuters

Of the top 500 companies globally by R&D spending, 228 have centres in India, shows a study by consultant Zinnov.

But investment by Indian-origin companies on research remains minuscule.

To be fair to the companies, TCS is considered a frontrunner in identifying technologies of the future.

Infosys is reportedly considering hiving off its products division and Cognizant has already reported revenue of $500 million from SMAC. Wipro chief T K Kurien said on Wednesday the company had invested in two technology start-ups. 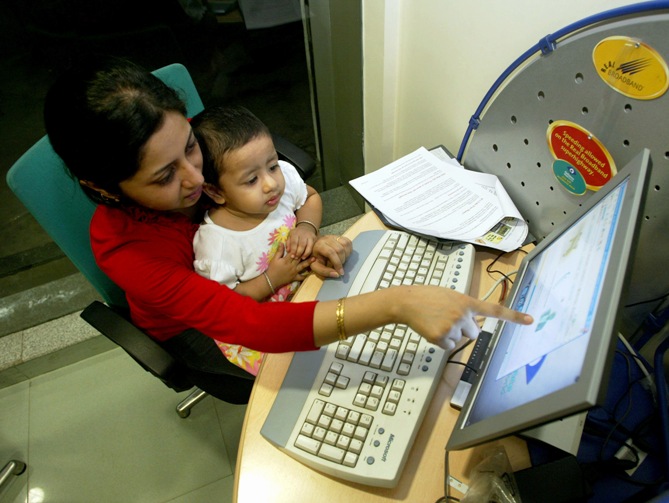 “There is innovation capability lying outside the organisation and there is a need to invest in the same,” he said.

However, experts argued if these companies have to move up the value chain, they will have to innovate more.

Cognizant’s executive vice-president of strategy and marketing, Malcolm Frank, agrees but says the dominant sector view that the traditional delivery model is no more relevant is ‘spurious’ and there are still a lot of underserved markets in Europe and Asia-Pacific.

However, SMAC does provide a lot of opportunities for intellectual property creation, he adds. 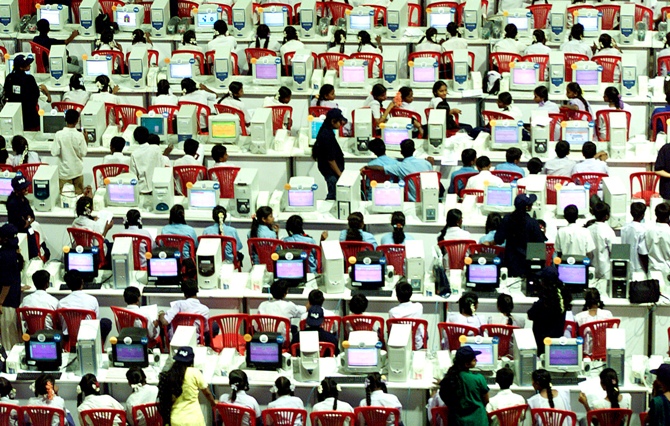 “We are already seeing a 20-30 per cent downward swing in pricing in contracts where autonomics is at play.”

But it is just scratching the surface right now, he added.

Most Indian IT players are already toying with the idea. TCS chief N Chandrasekaran said use of artificial intelligence is still ‘internal’ but the company could look at tie-ups in the future.

What the sector needs is to take stock of the situation, C P Gurnani, chief of Tech Mahindra, told a TV channel recently.

The sector needs to move to the next level quickly, he added. “The disruptive forces are not going to sit idle for long.” 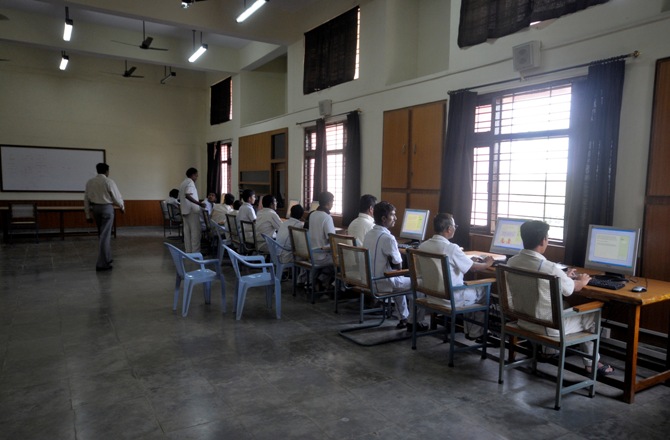 Image: Inmates attend a training session for a business process outsourcing centre located at the Cherlapally Central Jail on the outskirts of Hyderabad.
Photographs: Krishnendu Halder/Reuters

The sector’s digital shift is posing a challenge for Tata Consultancy Services.

Ajoy Mukherjee, global head and vice-president (human resources), said, “The sector is too dynamic in technology, business model and domain.

“So, we need to continuously build skills.”

After digitisation, the leadership has to be prepared for such skills.

Though Mukherjee said wages would be raised in April, he did not reveal by how much.

Taking a cue from the innovation theme of this year’s Nasscom Leadership Forum, there’s hardly any senior without a take on how to move up the value chain.

But few seem to have a clue on what actually needs to be done. One at a large-cap firm talked of ‘cloudification’, wisecracking that nobody was stopping Indians from at least innovating English with neologisms.

Nasscom has been trying to invite professionals from other fields to learn something from their experiences.

Speaking on excellence and ambition, Indian cricket commentator and journalist Harsha Bhogle said it was important to know what one was playing for.

He said the world had a nice way of rewarding those who excel despite odds, instead of those who have set their eyes on the reward for their excellence.