Sign in  |  Create a Rediffmail account
Rediff.com  » Business » IT czar, Shiv Nadar, has his heart in the right place 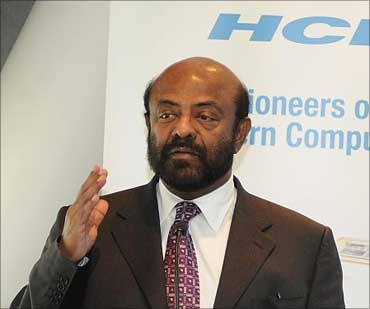 It wasn't a great start to our conversation: Shiv Nadar is barely audible above the noise in the Club Lounge in Mumbai's Grand Hyatt, and one of his executives makes it a point to say that he can spare just 45 minutes but it would be great if I can make it within 40.

As if that's not enough, I hear Nadar saying that he is usually quite reticent about talking to the media.

Nadar is, however, gracious enough to stretch our conversation to almost an hour and more than makes up for his 'reticence' with sheer passion.

His eyes light up when he talks about the distance HCL has covered from a barsaati (room on a terrace) in Delhi's Golf Links to a $5.5 billion enterprise employing 77,000 people; his voice chokes when he describes the extreme poverty he has seen in India's villages while working on his philanthropic projects; and his stern CEO-face gives way to that of an indulgent father when he talks about his only child - Roshni, 29 - now CEO of HCL Corporation, the holding company for HCL Technologies and HCL Infosystems. 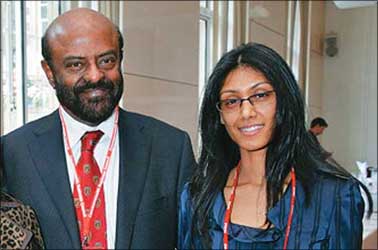 Image: Shiv Nadar along with his daughter Roshni.

But the professional in him knows where to draw the line.

"In a highly skilled industry like IT, you have seen only one family succession so far -  Tom Watson Sr and Jr - at IBM.

I know the industry inside out; my daughter doesn't. So she can't play the role that I have played.

Ownership has to be separated from day-to-day stewardship of group companies," the 65-year-old Chairman and Chief Strategy officer of group flagship HCL Technologies and co-founder of the HCL group, says.

As the masala chai arrives at lightning speed, an aide chips in to say that the boss is a 'softie' at heart.

It is my turn to choke; the adjective sits strangely on a man who was known for a volatile temperament that petrified his colleagues when he was CEO, a role he gave up four years ago. 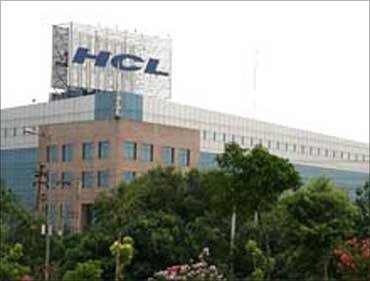 He says he can still tolerate mediocrity, but not lack of passion in work.

"I have been severe on myself in my pursuit of perfection and I expect my colleagues to roll up their sleeves and push the boundaries.

That's a must if one has to see dreams becoming a reality," he adds.

Dreams certainly did become a reality in the case of this son of a district judge in Tamil Nadu.

It was 35 years ago that he, with five fellow founders, left a secure corporate job in DCM with a dream that the microprocessor would change the world.

This at a time when India had a total of 250 computers. 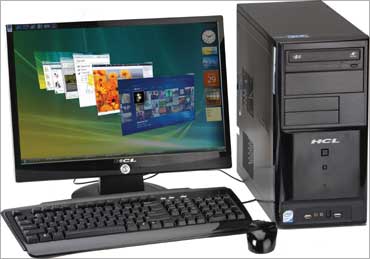 But with around Rs 180,000, the six founders formed a joint venture with the UP Electronic Corporation, which held 26 per cent but wanted the company to be named Uttar Pradesh Computers.

But a little bit of Nadar's convincing power to choose a name with nationwide resonance helped them settle for Hindustan Computers Ltd, which later became HCL.

Since its inception, Nadar says, HCL's core focus area has been technology and product development so it remains at the high end of technology.

It has done it all - 'from designing the world's first personal computer in 1978 (IBM and Apple would disagree with that) to working on the Boeing Dreamliners Flight Management Systems.' 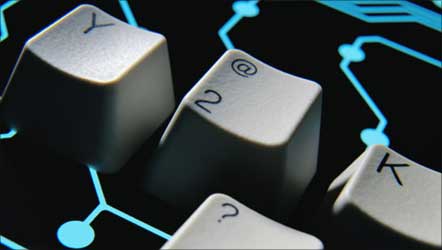 So far, so good. But why has HCL remained content with the number five position among IT majors?

When the Internet bubble burst in 2000, HCL was left behind by its competitors because of their headstart in enterprise application services.

Nadar admits it was a 'big mistake' to have missed out on the Y2K opportunity because HCL was the most qualified for it.

"We could have easily become number one had we grabbed that opportunity," he says, quickly adding that the new professional management at HCL is doing an excellent job. "If they were not, I would have changed them."

Pointing out that the visibility is quite clear for the IT industry after a rather shaky 2009, Nadar, however, says the future of how Indian IT companies will work is not how they have worked in the past when it was more about relocating something. 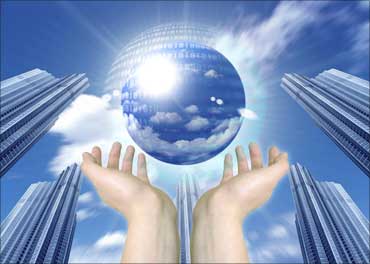 That is where his role of a Chief Strategy Officer becomes critical.

"HCL has become an elephant and elephants can run only at a certain pace. So it has to be mindful of the fact that deer can easily outpace them," Nadar says.

But his afterthought is ominous for HCL's competitors: "Deer have to remember that they can't and shouldn't come in the elephant's way too often.

Chances of being crushed to death increase manifold," Nadar says, while reaching for the tea that has turned cold.

I think of the aide who was hopelessly wrong in describing his boss as a 'softie'.

Sensing that time is running out fast, the chairman is eager to talk about the new phase in his life - that of a social entrepreneur, the inspiration for which came from his mother.

"Since my childhood, I have seen my mother set something aside to give away, even through hard times.

She was the one who reminded me of what I owed society - education. And that is what really sustains and rejuvenates me," Nadar says. 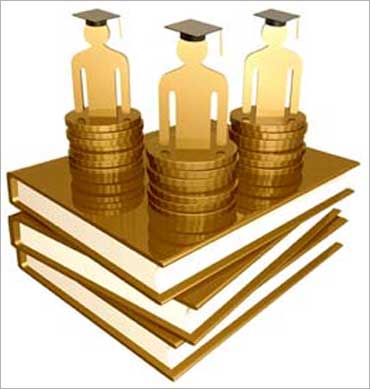 He has committed to put aside 11 per cent (his personal net worth is estimated at Rs 15,000 crore) of his wealth for philanthropic ventures, which include building and running free schools, universities and a museum of art.

In the next five years, his philanthropic educational projects will entail an expenditure of Rs 4,000 crore (Rs 40 billion).

The focus is on free residential schools, a proposed Shiv Nadar University, and a Museum of Art named after his wife.

A little-known fact about the foundation's SSN Institutions is the significant scholarship support they provide to around 400 students totalling Rs 4 crore (Rs 40 million) every year.

Since its inception, Rs 36 crore (Rs 360 million) worth of scholarships have been disbursed to 5,000 students, many from extremely challenged backgrounds. 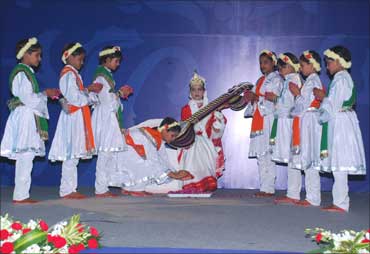 Image: A performance by the students of VidyaGyan.
Photographs: Courtesy, VidyaGyan

The first of the residential schools, called VidyaGyan, spread over a 20-acre campus, came up in Bulandshahar in Uttar Pradesh, a little over a year ago.

Three more are slated to come up shortly.

The VidyaGyan Schools, from class six to 12, propose to pick the best of students from rural and remote areas in Uttar Pradesh from families with annual incomes of under Rs 100,000 and the selection is done from the class five results of students who sit for exams under the UP education board.

Eventually, 5,000 students a year will study in the schools and the funding will come from the Foundation's resources.

Nadar says while the university will be self-sustaining, it's the schools that will be a very expensive proposition, a reason he has turned down proposals from other state governments to set up similar schools. 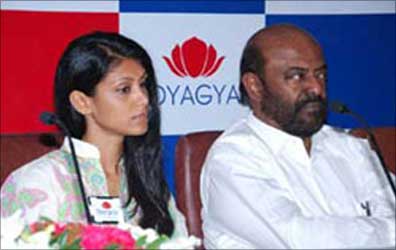 Terming his work creative philanthropy, Nadar says his biggest satisfaction is that it creates individuals who could potentially be world changers.

It's time to leave, and I ask him whether he is disturbed by the governance deficit in the country, a point on which his peers, like Azim Premji, have been quite vocal. Nadar recounts how his mother had broken a bone and was crying in pain when the doctors were trying to fix it.

Unable to bear it, he stormed into the operation theatre and shouted at the doctors for causing the old lady so much pain.

He still remembers the advice he got from the doctor friend: "Shiv, if we don't do this, she will never be able to recover."

He expects the "men at the helm to deal with the festering wounds of the nation in much the same way".

The passion is back in Nadar's voice.