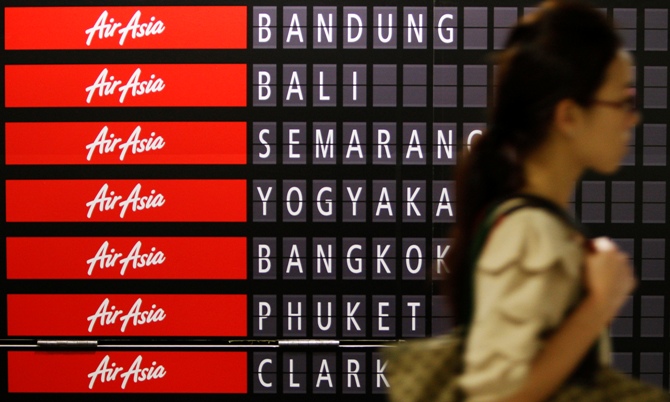 Image: A commuter passes an AirAsia advertisement showing the destinations that the budget carrier flies to, at a train station in Singapore.
Photographs: Edgar Su/Reuters Sharmistha Mukherjee in New Delhi

Domestic air fares might fall with the new airline venture of Tata Sons and Singapore Airlines.

These fares had risen 20-25 per cent after the exit of Vijay Mallya’s Kingfisher Airlines last October.

At its peak, Kingfisher had nearly 30 per cent of overall capacity in the market.

With the launch of Tata AirAsia and Tata-SIA, the added capacity will bring down fares considerably, say observers.

Sharat Dhall, president, Yatra.com, said: “The aviation market in India is under-penetrated and has tremendous potential for growth. 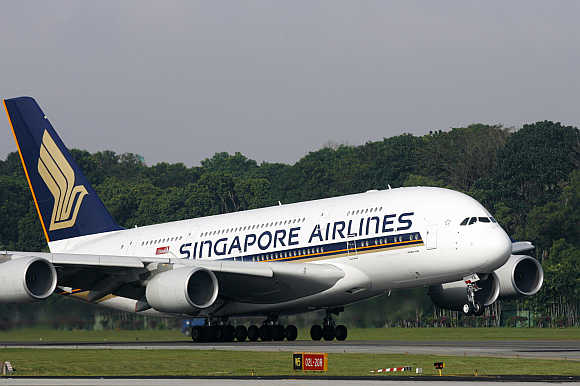 “With capacity addition, there would be some rationalisation of  fares, which would make air travel more affordable for the common man.”

India is considered one of the most under-penetrated aviation markets in the world. According to data shared by AirAsia Group while releasing its financials in December 2012, the country has 422 aircraft for a population of 1.2 billion.

“Based on Centre for Asia Pacific Aviation data for 2012, the number of domestic airline seats per capita is very low in India, at just 0.07. 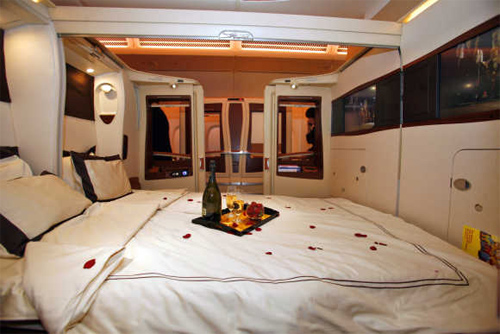 Image: A view of inside the first-class twin cabin section of the Singapore Airlines Airbus A380 in Toulouse, France.
Photographs: Pascal Parrot/Getty Images

“We would like to ensure that we are able to realise the original vision of launching a full-service, world-class airline that India can be proud of,” said Mukund Rajan, member (group executive council), Tata Sons.

On Tuesday, Tata Sons tied the knot with Singapore Airlines (51:49 joint venture) to set up, at an investment of $100 million, a full-service airline based out of Delhi.

Rajan is one of Tata Sons’ nominees on the board of the proposed airline.

“Indian passengers and inbound foreign tourists will get one more airline to choose from. The resulting competition will improve services and lower prices. 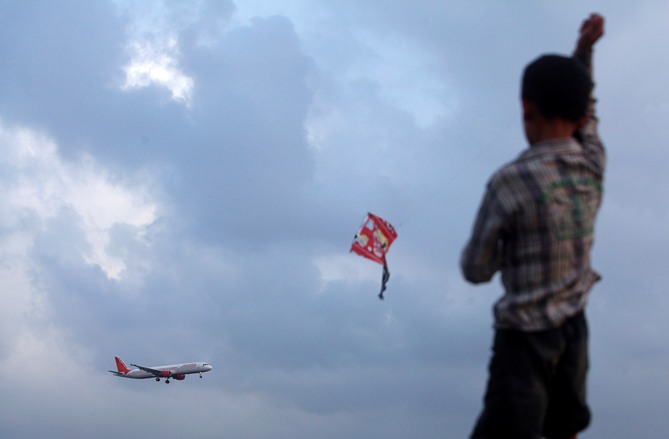 Image: A boy flies a kite from a rooftop overlooking Chhatrapati Shivaji International Airport, as a Boeing 737 aircraft belonging to Air India comes in to land in Mumbai.
Photographs: Vivek Prakash/Reuters

With both the Jet-Etihad and Tata-SIA ventures expected to compete on long-haul routes out of India, sector experts say ticket pricing for outbound travel, too, is likely to get aggressive.

While the potential for growth in traffic is huge, with the number of domestic air passengers in the country projected to triple to around 175 mn annually by 2021 from 58 mn in 2012, experts said Tata-SIA would eventually look at commencing international operations as well.

Dubey added, "SIA is not coming only for the domestic routes. Its biggest strength lies on trans-continental long-haul flights.

“Nearly 70 per cent of India's international traffic goes westward (to West Asia, the Americas and Europe), most of which is cornered by the West Asian carriers.

“Once SIA comes in, they can compete on those routes on the Indian quota.”

At present, government rules do not allow airlines with less than five years of operations and a fleet of 20 aircraft to fly abroad.

There is a move to amend the rule but no decision has been taken. Tata-SIA has evinced interest in commencing international operations out of India, if rules permit.

Malaysian low-cost airline AirAsia cleared another hurdle for launching an airline in India.

The civil aviation ministry on Friday granted a no-objection clearance to AirAsia for launch of operations.

Now, the airline will have to apply to the Directorate General of Civil Aviation for an operator permit.