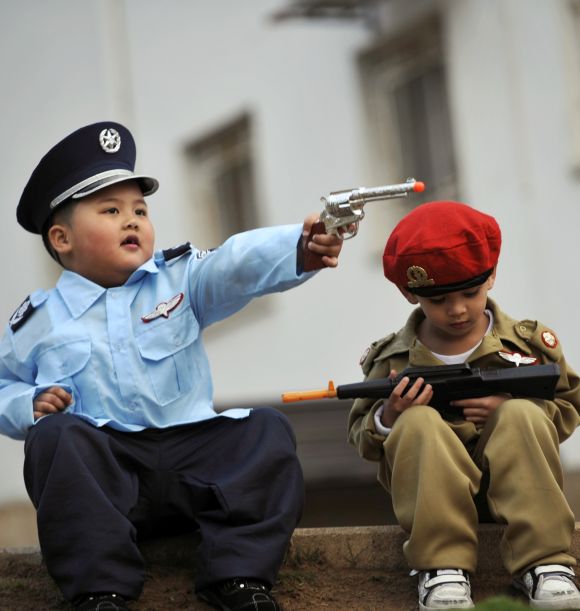 A recent MBA graduate, Puneet Kohli, got a job offer from a global commodity giant to join their office in an African country. The salary and profile was lucrative but something stunned him.

In briefing, he was told that he has to deal with warlords and extremists and will not be given security on daily basis. In case of unrest or coup or any other emergency, he will be evacuated. He declined due to safety issues.

It’s not easy to work in many parts of the world where there are constant fear of death or poor health infrastructure. Maplecroft, a consultancy, rates 197 countries to determine the risks in each based on the minimum wage, working hours, health and safety in the workplace.

And the company says that the global working conditions are worsening, “for workers, especially migrants, relating to wider labour related issues, including trafficking and forced and bonded labour.”

Here are the 10 most dangerous places to work, according to Maplecroft. 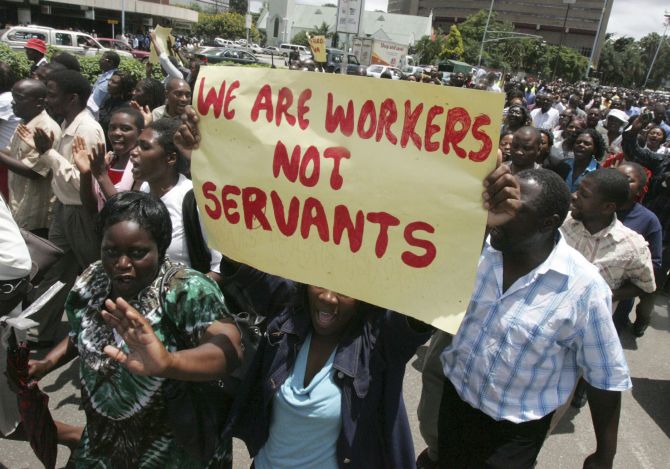 The country has widespread poverty and about 80 per cent unemployment rate. It continues to grapple with hyperinflation and price rise had hit a peak of 231 million per cent in 2008.

Due to economic issues, the government has come up with norms that make working in Zimbabwe extremely difficult. For example, starting or closing a business is slow and costly. Labour market is highly regulated and hiring or firing a worker is cumbersome and difficult.

Combined with these, there are problems such as poor health infrastructure. The country has seen outbreak of many diseases such as cholera, which is termed as the deadliest African outbreak since 1993. The country also lacks safe drinking water and has extremely poor sanitation. 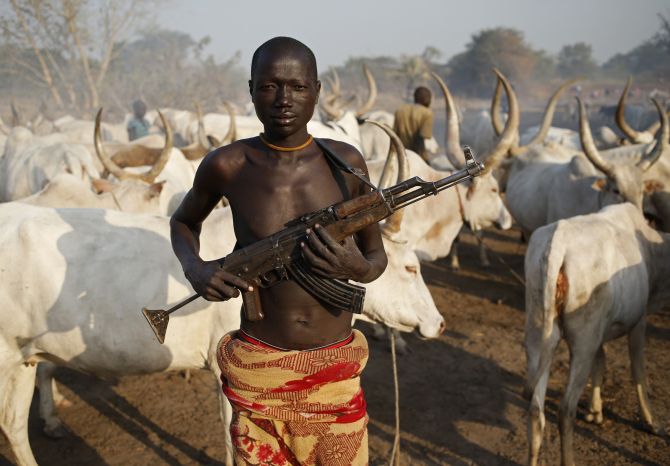 The economy of South Sudan is one of the world's weakest and most underdeveloped with the country having little infrastructure, the highest maternal mortality and female illiteracy rates in the world as of 2011, according to Wikipedia.

Most part of the country does not have electricity, running water or paved roads.

But those are the problems one can manage with while working there. What’s beyond control are the constant battles between the government and rebellions.

The world's newest nation has seen power struggle between President Salva Kiir and rival Riek Machar, which has resulted in deaths of about 10,000 people and about 860,000 reportedly have been displaced.

The unrest has seen rapes, killings and scores of villages being burned down.

Countries such as China, which were lending money to South Sudan for its oil, are now unwilling to move forward on business contracts. 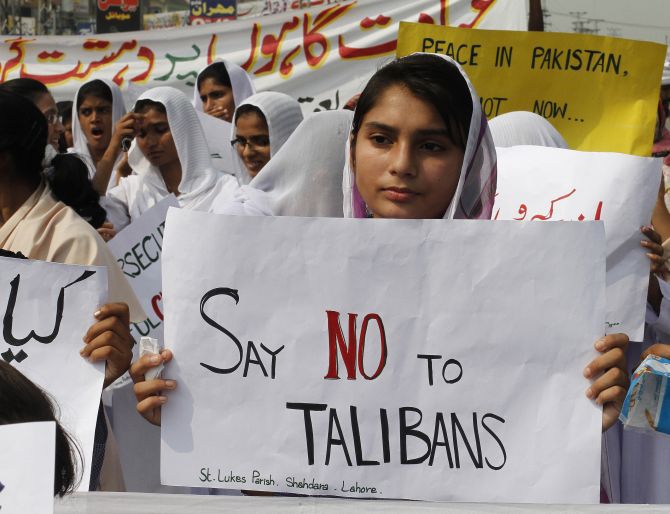 Pakistan’s economy is not as bad as South Sudan or Zimbabwe. In fact, it is considered to be rapidly developing country and is ranked 26th in terms of Purchasing Power Parity.

The country’s political instability and presence of Al-Qaeda and Taliban makes it as one of the worst places to work.

In fact, reports in international media points out that the two terrorist outfits are headquartered in Pakistan and have stated that the country had harboured Osama Bin Laden for a decade.

Pakistan has seen bombings by the terrorist outfits and also there is constant Sunni-Shia violence. 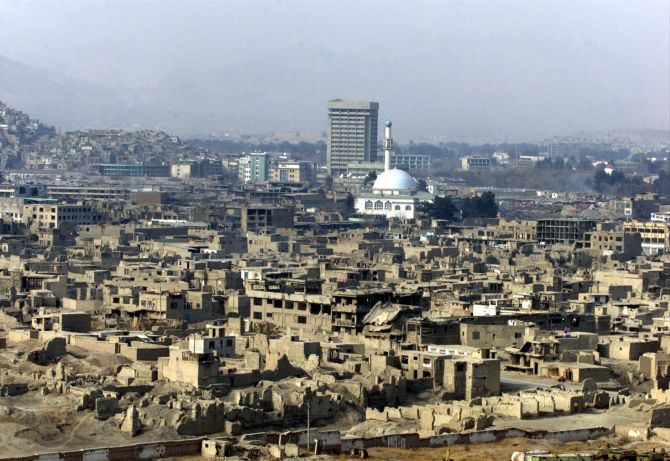 Though the country has untapped mineral deposits, it remains one of the weakest economy in the world. The unemployment rate is about 35 per cent and 36 per cent population lives below poverty line.

The issues of working in Afghanistan start with lack of basic infrastructure. The country is suffering from shortages of housing, clean drinking water, and electricity.

If you get past this, there are always fear that the terrorist outfit Taliban may strike with a suicide bomber in a public space. They have not spared even neutral organisations such as Red Cross that have worked in the country for over a decade.

Post war, many Indian businessmen were interested in opportunities available in the country. Afghanistan has also seen murders of contractors.

There have been instances of attacks on embassies, Including India, using car bombs. 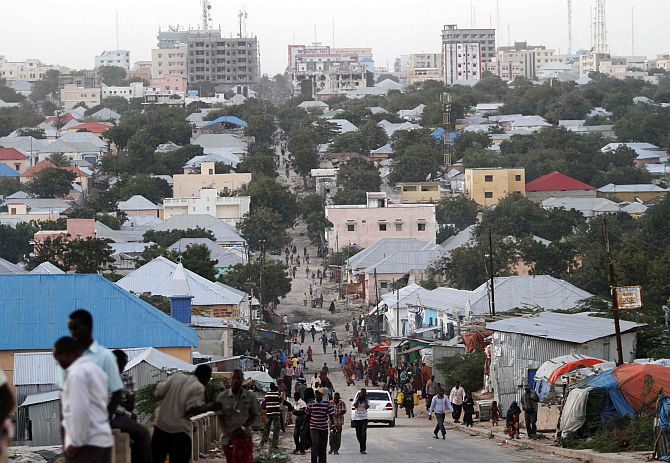 Until recently, the country never had a stable government. Agriculture has remained the main source of livelihood. Outside its capital city, Mogadishu, there’s hardly any economic growth.

There is no formal banking sector and the government has not yet been able to collect taxes from the people. But these are issues on can look beyond.

The toughest part of working in Somalia is surviving the civil war. After years of civil war between many factions, the country now face threat from a jihadi outfit called Al-Shabaab, which has joined militant Islamist organisation al-Qaeda as a cell.

Like many other African countries, there is also unpredictability of who will assume power and when. 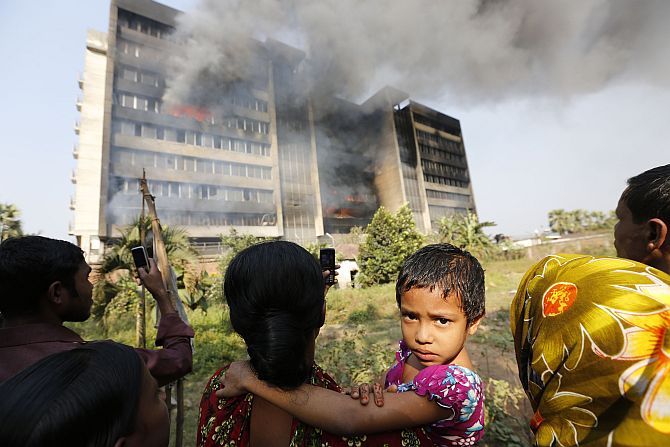 Image: Garment workers gather in front of the Standard Group garment factory which was on fire in Gazipur.
Photographs: Andrew Biraj/Reuters

Working in Bangladesh is fraught with risks and frustration. The country has poor infrastructure for business, has high corruption, and has shortage of power.

There is always a looming fear of political instability in the country. On top of it, the country has seen many factories and buildings collapse and even catch fire.

Beginning of this year when the country held elections, there were violence and killings, as the opposition boycotted the polls. At the time of independence, the country was the second most industrialised economy in Africa. Since then, it has been on a decline due to corruption, war and political instability. It now has the world’s lowest GDP per capital, according to Wikipedia.

In recent time, the world has probably never witnessed war that Democratic Republic of Congo was involved in. Dubbed as the ‘African world war’ and ‘Second Congo War’; it is considered as the world's deadliest conflict after the Chinese Civil War. According to Wikipedia, over 5.4 million people since have died since it started in 1998.

The spill over of this continues and now there's civil war between government and rebels.

The only job you should opt for in Congo is of a war reporter. 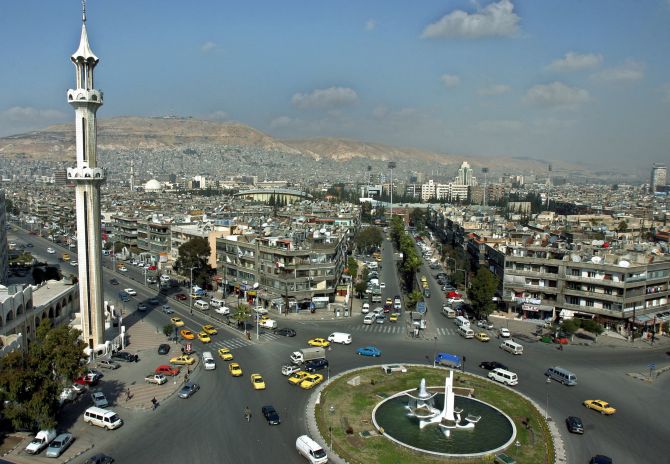 Since the out break of the Syrian civil war, the Country’s economy has been hit by massive economic sanctions restricting trade with the many countries across the world.

These sanctions and the instability since the past three years have reversed previous growth in the Syrian economy.

In areas affected by the civil war, it is difficult to even walk in the street, as both the sides have snipers hiding and looking for people in each other’s camp.

The situation is so bad that US had to close down its embassy in the country and call the staff back.

Forget about working in Syria, once you get there, you will be worried about getting out alive. 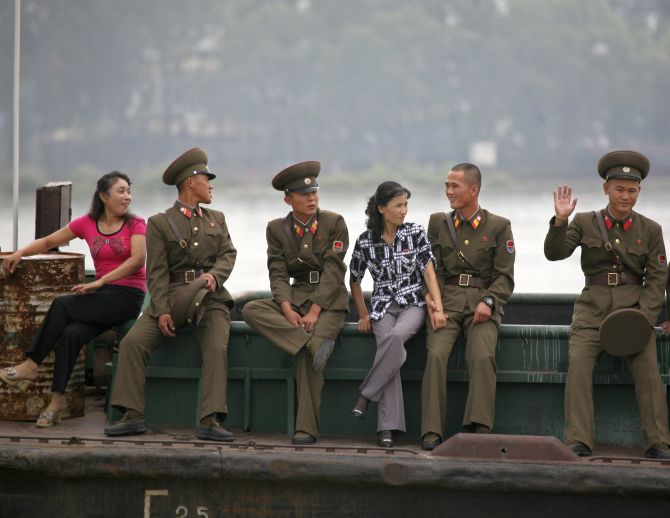 Image: A North Korean soldier waves to a Chinese tourist boat on the Yalu River near the North Korean town of Sinuiju.
Photographs: Jacky Chen/Reuters

Industrial capital stock is nearly beyond repair as a result of years of underinvestment, shortages of spare parts, and poor maintenance, according to CIA’s The World Factbook.

Almost all items, from food to clothes, have traditionally been handed out through a public distribution system, with money only having a symbolic meaning.

Most of the private jobs are illegal in Korea. Image: Eritrean kids pose for the camera before heading up the mountainside.
Photographs: Ed Harris/Reuters

Though the economy of Eritrea is doing well in the past few years, the country fare extremely poor when it comes to in human rights.

Domestic and international human rights organisations are not allowed to function in Eritrea.

Several human rights violations are committed by the government or on behalf of the government. Freedom of speech, press, assembly, and association are limited.

Residents are not even free to practice religion of their choice. The state has a list of registered religions.

Those who practice 'unregistered' religions, even if inside the house, are arrested and put into prison without any charge or trial.

There have been many other cases reported which points out that the ‘corrupt’ military of the country can get away with anything.