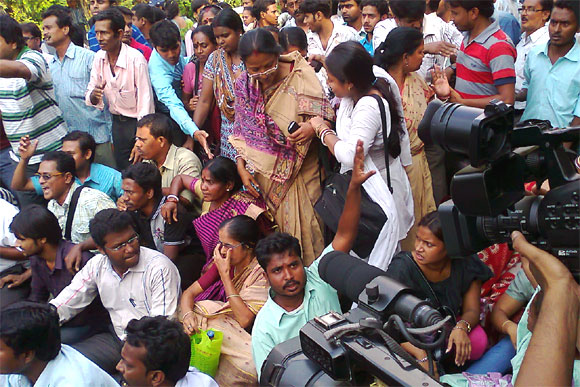 Saradha scam, which going by official data, runs up to about Rs 17,000 crore (Rs 170 billion) is once again in focus in West Bengal.

The Enforcement Directorate arrested Saradha scamster Sudipta Sen's wife Piyali and son Subhojit from different parts of Kolkata on April 16, almost a year after Sudipta and two of his associates were held from Kashmir.

The duo, it is alleged by media reports, was given protection by a Trinamool Congress minister.

With Lok Sabha elections in progress, Sens’ arrests have kicked up a huge political storm.

Here, we look into some important aspects of the ponzi scheme that rocked the economy of Bengal. 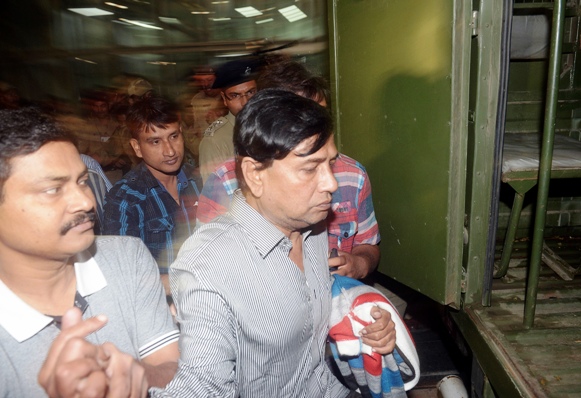 Why and how did West Bengal police fail to arrest the duo?

Sudipta Sen’s wife Piyali was held from Baguihati and his son Subhojit from Behala, both suburbs in Kolkata.

Both, according to sources, were residing in their respective accommodations for the past eight months.

Therefore, the obvious question that arises: How did Bengal police fail to arrest them?

Congress leader Arunava Ghosh told rediff.com during an informal conversation recently that there was an unwritten agreement between Saradha chief and West Bengal government that the latter would ‘protect’ Sen’s wife and son in lieu of which he would not reveal some ‘disturbing’ facts about the state administration either to state police or to the Special Investigation Team.

Now that the duo is in Enforcement Directorate’s hands, it would be interesting to watch how many cats Sen have to let out of his bag. 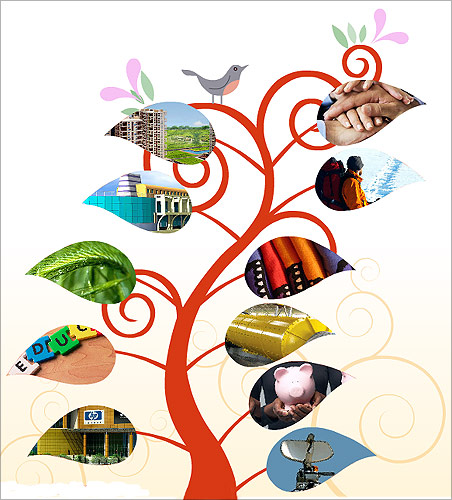 Image: The Shyamal Sen Committee got about 1.7 million applications from people affected by the Saradha scam.
Photographs: Rediff Archives

What did the Shyamal Sen Committee do?

The state government of West Bengal, by a Notification dated April 24 2013 published in Kolkata Gazette appointed a Commission of Inquiry consisting Hon’ble Justice Shyamal Kumar Sen, Retd. Chief Justice, Allahabad high court, as chairman and four other members under the Commission of Inquiry Act, 1952 to enquire into the different companies linked to the ‘Sharadha Group of Companies’ and other similar companies who have reportedly mobilised funds from the common people of the state in various forms including deposits, debentures, etc. and set up different ventures for the past several years.

The Shyamal Sen Committee got about 17lakh (1.7 million) applications from people affected by the Saradha scam.

Investors in other companies with similar schemes, such as Amazon (NOT the American electronic commerce company), Suraha Microfinance, Sunmarg, ICore, Rose Valley and Alchemist, also registered their complaints.

About 85 per cent of the complaints pertained to individual investments of less than Rs 10,000; the highest amount invested by an individual in Saradha was Rs 27 lakh (Rs 2.7 million). 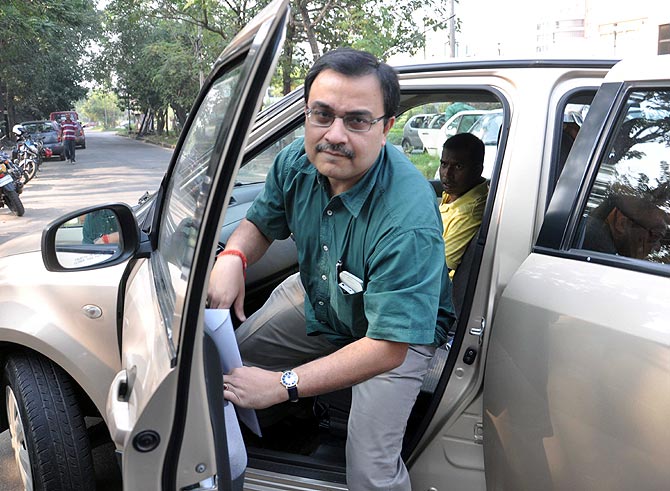 Why was Kunal Ghosh arrested?

The much-anticipated arrest of suspended Trinamool Congress Member of Parliament Kunal Ghosh took place in November 2013 for his alleged involvement in the Saradha scam.

The journalist-turned MP dropped a bombshell before his arrest by dragging party supremo Mamata Banerjee's name directly in the Saradha fiasco.

"Didi, apni CM theke PM hoben, ami media house ke seibhabei sajachchhi. (Didi, I am setting up my media houses in a way that it helps you become the PM).' This is what (Sudipta) Sen had told Mamata," Ghosh divulged to rediff.com on the eve of his arrest.

It should be remembered that soon after the Saradha scandal surfaced, the West Bengal chief minister had steadfastly defended Ghosh, saying that ‘he was only the CEO of Saradha’s media group and he should not be dragged into the case in any way.’

However, the TMC suspended Ghosh soon after he spoke against the party during an event in September 2013 and said that he was being made a scapegoat. 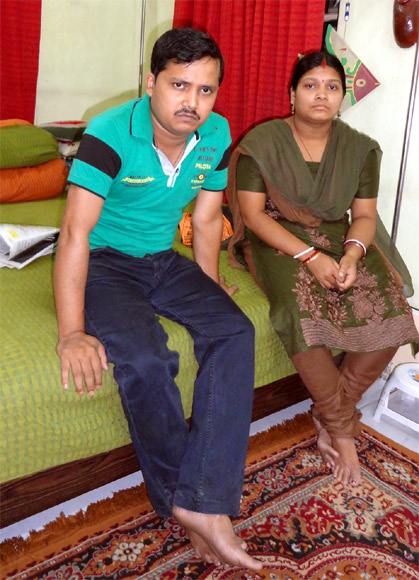 He left a private company's job to join Saradha as an agent.

His wife too followed soon after.

Biswas told rediff.com that till April 19, he has got back only one per cent of the total amount that he lost.

“We are in a dire state.

“To manage two square meals a day, my wife has started working as a maid.

“In the afternoon, she makes packets out of old newspapers and sells them in the local market,” Biswas said.

As for him, he is yet to get a job as “people don’t trust me any more. To many, I am a cheat,” he said, his eyes welling up.

Sudipta Sen's 'investment business' made its debut in 2006.

Saradha had numerous companies. Some that were registered with the Registrar of Companies were just shell companies.

The company became a household name when it surfaced in the media space in 2009 through Channel 10, a Bengali news channel.

In 2010, the group launched an English daily, the Bengal Post, and a Bengali daily, Sakalbela.

With the Trinammol Congress coming to power in Bengal in 2011, group owner Sen started rubbing shoulders with those at the helm and thereby gained enormous confidence of his investors.

His group's expansion was rapid and massive.

Ghosh saw to it that all media arms of the Saradha group blindly sang praises of Trinamool supremo and Bengal Chief Minister Mamata Banerjee.

In November 2012, while opposing the United Progressive Alliance government's decision to introduce foreign direct investment in the retail sector, Banerjee was adamant about moving a no-confidence motion against the ruling alliance, despite being isolated by the other parties over it.

She even said she would support a no-trust motion moved by her sworn enemies, the Left parties.

Political analysts were deciphering her desperation as Banerjee's last resort to fight several investigations launched by the Centre against her party colleagues and close aides.

According to a report then published in the most circulated Bengali newspaper, the Anandabazar Patrika, Banerjee was under pressure from investigations -- one initiated by the Serious Fraud Investigation Office against a company owned by Trinamool Congress Rajya Sabha member K D Singh and another against various chit funds in West Bengal owned by individuals allegedly close to the Trinamool Congress party.

It was alleged in that Patrika report that the Trinamool government was the chief patroniser of these chit funds.

Questions were raised in various corners, but they were never addressed and conveniently swept under the carpet.

The Saradha chairman Sudipta Sen was in ‘total control’ of all deposits made by his group companies, which are under the scanner for having perpetrated the alleged fraud. 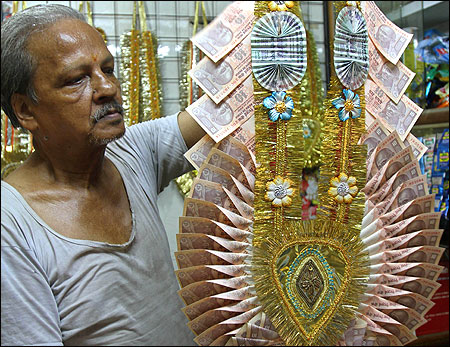 Image: According to Securities and Exchange Board of India findings, Rs 10,000 crore (Rs 100 billion) had been raised by so-called money circulation schemes.
Photographs: Reuters

Other states are not immune

According to Securities and Exchange Board of India findings, Rs 10,000 crore (Rs 100 billion) had been raised by so-called money circulation schemes, or by people who run collective investment schemes but refuse to be under any sort of regulation.

People who invest in such products are simple, ordinary workers.

They don’t put in illegal money.

They put in their hard earned money into this.

But the process through which the invested money is reinvested is illegal.

On March 14 2013, Corporate Affairs Minister Sachin Pilot presented a list of 87 such companies in Parliament.

Complaints had been raised against these companies for indulging in Ponzi schemes. Seventy-three of these were from West Bengal.

Eight companies of the Saradha Group figured in the list, as did 16 companies owned by Rose Valley.

The ministry had ordered the Serious Fraud Investigation Office to fast-track investigations. 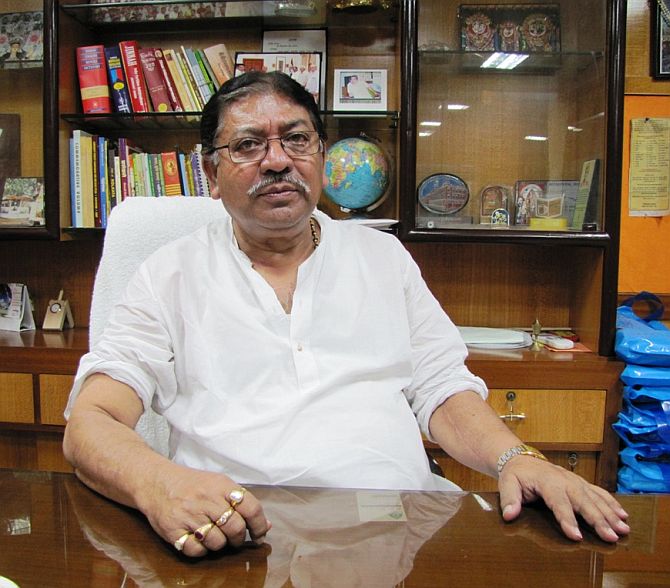 "These chit funds are collecting deposits mostly from the guileless rural and semi urban public, unrestrained by any regulatory administrative mechanism, luring them with promise of sky-high returns," Mitra had written.

A fair portion of these funds are channelled into real estate and other high risk ventures such as film production, media, and hotel industries.

In his letter to Singh, Mitra alleged that these chit funds prospered with patronage of politicians who have even helped some chit funds' owners to enter the illustrious House of Parliament. 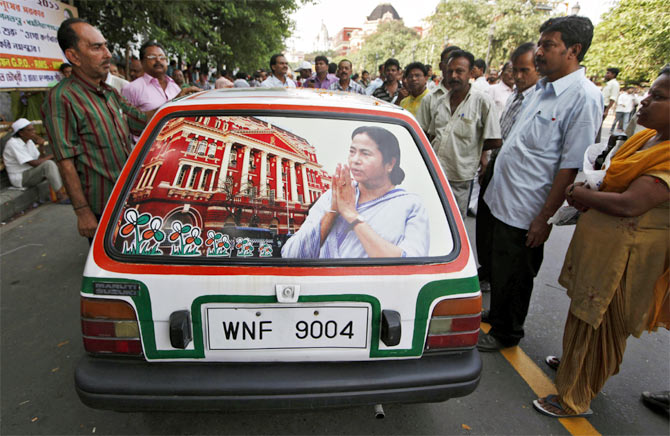 Image: A car decorated with an image of Mamata Banerjee after she took the oath as chief minister.
Photographs: Rupak De Chowdhuri/Reuters

Where did all the money go?

Eminent columnist Praful Bidwai wrote in rediff.com in May 2013: ‘Sen is a clever manipulator who kept the powers-that-be pleased through generous donations and bribes. ‘The Saradha group wasn’t just a milch cow for the TMC in West Bengal.

‘It also filled the coffers of unscrupulous politicians in states like Assam and Odisha. ‘Nothing could be a starker example of politician-business-media collusion.’

Sen himself documented his ‘proximity’ with TMC leaders in an elaborate letter he sent to the Central Bureau of Investigation before absconding.

The rumour mills have it that he spent Rs 1.86 crore (Rs 18.6 million) to buy Mamata Banerjee’s paintings and showered expensive gifts on her party and government. Trinamool leaders allegedly extorted millions from him in return for ignoring his fraudulent activities.

The vast majority of Saradha’s victims only got a pittance from the Rs 500 crore (Rs 5 billion) compensation fund set up by the Banerjee government, to be part financed by an additional levy on cigarettes.

ED recently issued summons to numerous entities involved in the case even as it attached assets worth Rs 140 crore (Rs 1.4 billion) of individuals and firms on money laundering charges.

Recently, ED's zonal office in Kolkata issued summons to about 15 people involved in the funds transactions of the scam that came to the fore early last year after duped investors raised their voice of grievance.

The notices come in the backdrop of ED attaching Rs 105.62 crore (Rs 1.05 billion) assets of various entities involved in the case including Saradha director Sudipta Sen and Piyali.

It had attached Rs 34 crore (Rs 340 million)-worth of assets earlier in the same probe.

But the attached amount falls far short of the total value of the scam.

Did Sen’s wife and son manage to transfer the rest of the money to some yet to be disclosed foreign accounts in the past one year?

This is a knotty question and finding its answer would be one of ED’s main tasks at the moment. 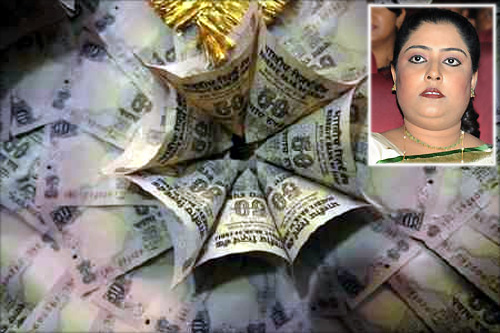 Image: (Inset) Debjani Mukherjee, one of the directors of Saradha group.

What will the ED do now?

ED officials are likely to inspect Sudipta's accounts with the Salt Lake branch of a nationalised bank and Piyali's locker.

The ED lawyer had submitted before the city sessions court that they have invested a huge amount of Saradha money in insurance schemes, shares and mutual funds and also parked money under fictitious names.

Investigators are looking into all these aspects. However, there is a high possibility that the accused might have taken steps to hedge such transfers during the one year they were free.

The agency has till now issued attachment orders on all equity shares of all 224 companies of the Saradha group, insurance policies in the name of Sen and his wife, land properties and plots, 390 bank accounts and equity shares of a television channel run by the group.

The agency has also issued an advisory that no one should ‘transact’ in these attached assets without seeking permission of the agency. 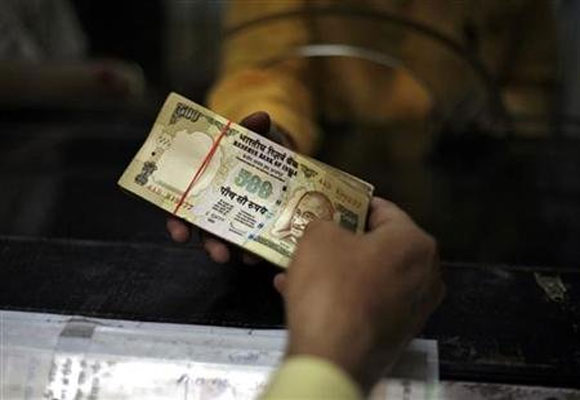 Image: Sources say as many as seven to eight Bengal politicians may be summoned, either by Serious Fraud Investigation Office or ED to track the money trail.
Photographs: Reuters

It will be a real challenge for agencies probing the scam to present something tangible to Supreme Court when the case comes up for hearing on April 23.

Sources say as many as seven to eight Bengal politicians may be summoned, either by Serious Fraud Investigation Office or ED to track the money trail.

Some politicians have reportedly been served notices to appear for questioning. 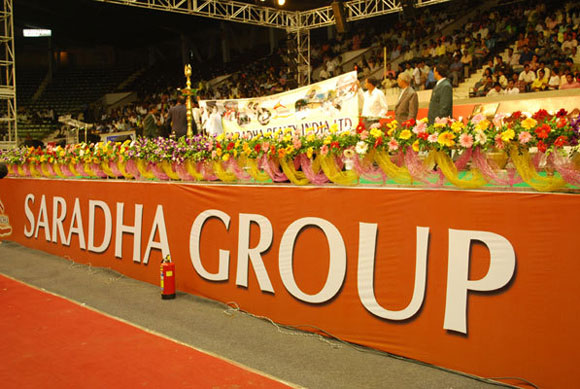 According to many political analysts, Saradha is a puzzle, riddle and enigma all rolled into one.

Though a year has passed, some intriguing questions still remain unanswered. These are: