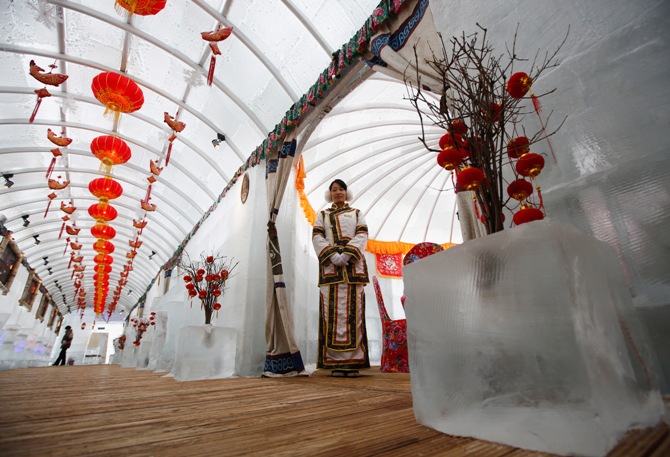 Image: A waitress poses during a photo opportunity at the Ice Palace in Shangri-La Hotel in the northern city of Harbin, Heilongjiang province.
Photographs: Kim Kyung-Hoon/Reuters Aditi Shah in Mumbai

Global players with long-term ambitions are encouraged by the prospects for India's hospitality sector, where revenues are expected to more than double to $36 billion by 2018 from $17 billion in 2008, notes Aditi Shah

Less than nine months after opening the first hotel in Mumbai under its brand, Hong Kong luxury chain operator Shangri-La Asia handed the keys back to the owner.

Now, US-based Starwood Hotels & Resorts Worldwide Inc is in talks with the same owner to take over management of the property under its St. Regis brand, people familiar with the matter said, part of a shake-out at the luxury segment of India's ailing hotel industry.

Slowing economic growth and an oversupply of new hotels conceived during the boom years of 2006 and 2007 have led to falling room and occupancy rates in India, straining relationships between hotel owners and the global chains brought in to run them.

But while some global operators are leaving, others like InterContinental Hotels Group, Hyatt Hotels Corp and Starwood are jumping in, using the now unbranded hotels to accelerate their expansion in a country they believe has long-term potential.

"More than half the future deals we are looking at are conversions in the four- and five-star category," said Dilip Puri, India head and regional vice president for South Asia at Starwood, which currently runs 38 hotels in India and plans to have 100 in operation or under construction by 2015.

Puri declined to comment on Starwood's interest in the erstwhile Shangri-La.

The hotel, now called the Palladium, is owned by mall developer Phoenix Mills Ltd and both the company and Shangri-La declined to comment on why the partnership ended.

Shangri-La, however, appears to be betting big on mainland China: about half of the 27 hotels it plans to open, or are under construction, over the next two years will be in China, according to the company's website.

Six years ago, a night at a luxury hotel in the Delhi region cost on average Rs 10,429 -- about $259 at the time and on par with several five-star hotels in Singapore.

Occupancy rates were an enviable 74 per cent, according to hospitality consultants HVS, as business travellers flocked to India, an economy that was then growing at nearly 10 per cent.

Since then, economic growth has halved, reducing the flow of corporate guests who make up about 70 per cent of the business for five-star hotels in cities like Delhi and Mumbai.

Average room rates in the capital region have also almost halved to around Rs 6,850, while occupancy rates were 55 per cent, according to HVS. The declining economy, and revenues, have sparked a blame-game between hotel owners and operators, prompting the ‘reflagging’ of several properties. 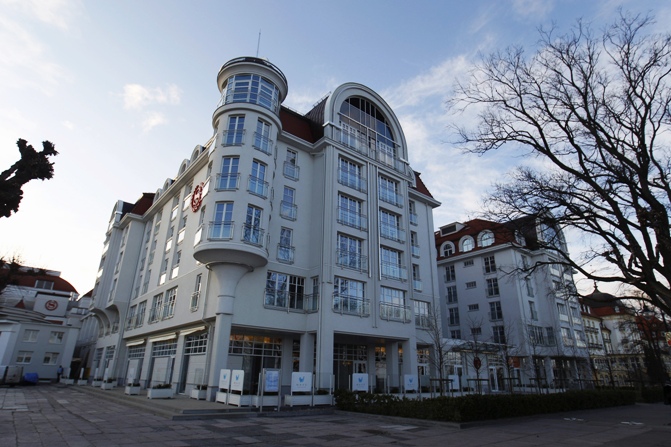 Image: A view of the Sheraton Hotel in Sopot.
Photographs: Peter Andrews/Reuters

Operators say the owners are demanding unrealistic returns after over-leveraging themselves, while owners say operators over-promised on performance.

"The relationship is breaking because somebody made a promise and the reality is far from the promise -- both due to economic reasons and sometimes due to performance lapses," said Ashish Jakhanwala, chief executive of Samhi, an Indian firm that owns hotels.

In it for the long haul

Global players with long-term ambitions are encouraged by the prospects for India's hospitality sector, where revenues are expected to more than double to $36 billion by 2018 from $17 billion in 2008, according to research firm Technopak Advisors.

Starwood is emerging as one of the more aggressive players in India.

About 86 per cent of the company's pipeline of new rooms is outside the United States, mostly in Asia Pacific.

India is currently Starwood's fourth-largest market by hotel numbers and by the end of next year, it will move up to third place, overtaking Canada.

By building its brand domestically, Starwood also hopes to court the loyalty of Indians travelling abroad. 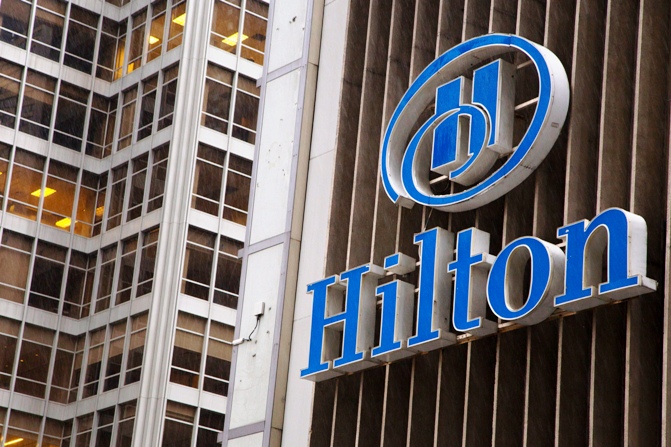 "This, we believe, is a huge opportunity for us. . . our growth and distribution in India therefore has a much larger strategic significance," said Starwood's Puri.

Other operators are also expanding.

This month, it also announced plans to open its first Conrad hotel next year.

Rival Hyatt, which runs 17 hotels in India and has 40 under development, is in advanced talks to manage a 228-room Delhi property that until the end of 2013 was a Hilton, according to people familiar with the matter.

Dhruva Rathore, Hyatt's South Asia vice president of development, declined to comment on his company's interest in the former Hyatt, but said India was a key market. 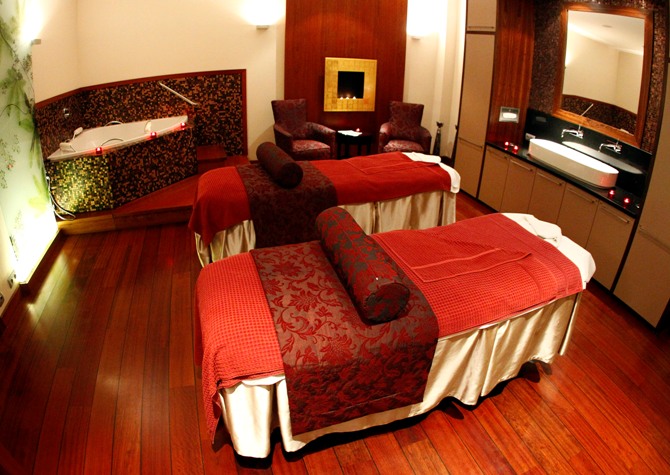 Image: A view of a spa at the Sheraton Hotel in Sopot.
Photographs: Peter Andrews/Reuters

"We actively seek conversion opportunities that fit within our brand portfolio and enhance our presence in key markets," he added.

London-based InterContinental, which runs 18 hotels in India and aims to have 57 over the next four to five years, is also seeking to take over two hotels that were run by Hilton in New Delhi. Douglas Martell, InterContinental's vice president for operations in southwest Asia, said he was approached by the hotels' owner, Eros Group.

"They felt that the properties were not being maximised, their performance was not being maximised and would we be happy to take a look at them," said Martell, adding that reflagging will be a growth driver for the company in India.

"At the end of the day some people are going to feel that they just do not have the right brand on their hotel."