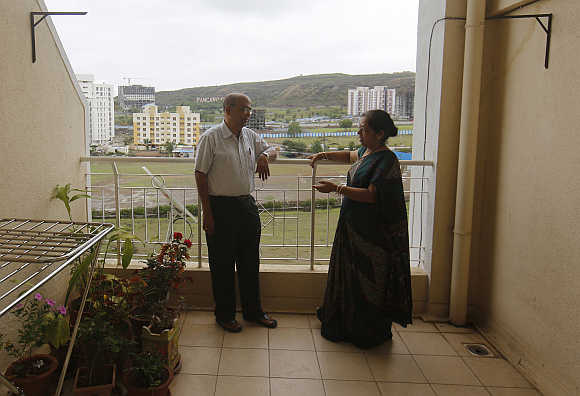 Image: Suresh Chitre, 67, and his wife Rekha Chitre, 63, stand on the balcony of their flat at the Athashri retirement village in Baner, on the outskirts of Pune.
Photographs: Danish Siddiqui/Reuters Aditi Shah in Pune

The Athashri retirement community offers the over-55 crowd Western-style amenities such as a clubhouse, gym, library and pool but with a distinctly Indian twist: a temple on site where residents worship Ganesh.

The 180-unit development in the city of Pune, which enjoys better weather and less bustle than nearby Mumbai, overlooks open fields and hills and is set in lush gardens - an appealing escape from the crowds and grime of India's mega-cities.

Retirement communities like this one are just beginning to gain traction in India, where the multi-generational "joint family" structure endures despite rampant modernisation. The concept of housing for the elderly still carries a social stigma in the country, which accounts for less than 1 per cent of the $25 billion senior housing industry worldwide.

But rising incomes, longer life expectancy and the rise of nuclear families as more people relocate for jobs are driving demand for retirement homes in Asia's third-largest economy, and attracting developers and investors.

Tata Housing Development, part of India's biggest conglomerate, launched its first senior housing project in May in Bangalore, and plans at least four more, catering to independent retirees looking for better security and services than what is available in ordinary housing. 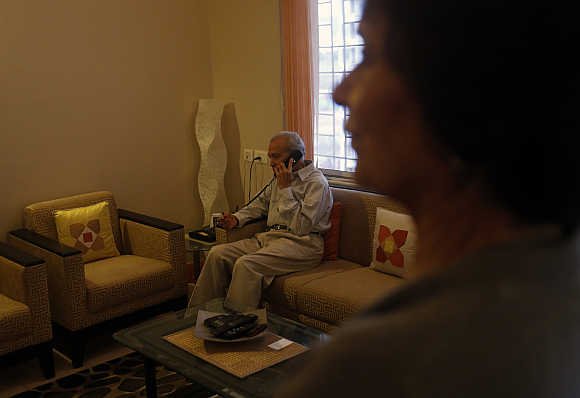 Image: Aruna Gokhale, 81, watches as her husband Vidyadhar Gokhale, 84, speaks on the phone in their flat at the Athashri retirement village in Baner, on the outskirts Pune.
Photographs: Danish Siddiqui/Reuters

"A significant section of seniors today are independent, financially stable, well-travelled and socially connected, and as a result have a fairly good idea of how they want to spend time after retirement," said Brotin Banerjee, CEO, Tata Housing, which expects revenues of Rs 950 million ($16 million) from its Rs 700 million project investment over three years.

While India is much younger than Japan, China or the United States, the number of people over age 60 is expected to more than double to 173 million by 2025.

After spending two decades in Houston looking after their grandchildren, Vidyadhar and Aruna Gokhale returned to India last year and moved into a retirement home.

Developers view such Indians returning from overseas, the vast and often prosperous diaspora known as non-resident Indians or NRIs, as a key target market.

"Nobody needs us there so we thought we should live our lives the way we want to because we are young enough to be able to enjoy it," Aruna Gokhale, 81, said in her apartment at Athashri in Pune, where she and her husband, now 84, grew up. 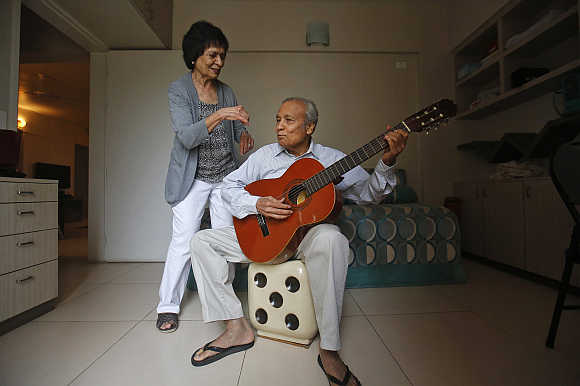 Image: Aruna Gokhale, 81, watches as her husband Vidyadhar Gokhale, 84, plays guitar in their flat at the Athashri retirement village in Baner, on the outskirts of Pune.
Photographs: Danish Siddiqui/Reuters

Most of India's retirement homes are targeted at urban middle- and upper-income buyers who can afford to pay between Rs 3 million and Rs 6 million ($50,200 and $100,400) for an apartment, which is cheap by Western standards but beyond the reach of the average Indian. Max India is building a project in the north Indian hill resort town of Dehradun that aims higher, with villas priced above Rs 10 million.

Unlike the United States, where retirement housing is typically rented, providing recurring annual income for investors, in India people prefer to own. That suits developers as well because it means less capital tied up. Investing in Indian retirement homes generates returns of about 25 per cent annually for developers, less than the 35 per cent that is typical for comparable ordinary housing in the country, Jones Lang LaSalle said.

That is partly because the retirement communities include more open, communal space. Developers are also keen to keep prices affordable for middle-class buyers who normally must pay cash as Indian banks rarely offer mortgages to seniors. Developers expect economies of scale to bring down costs as the industry grows, and they hope eventually to be able to charge more for amenities such as food and facilities. 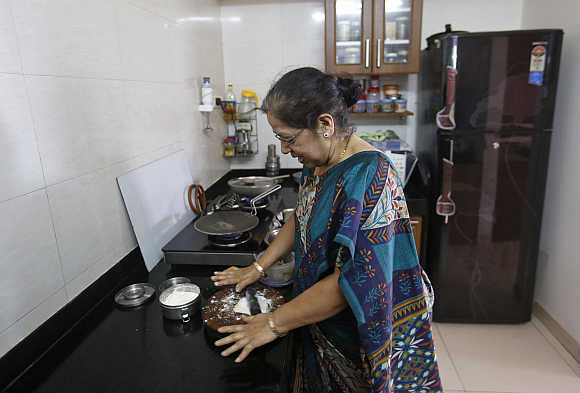 Image: Rekha Chitre, 63, cooks in the kitchen of her flat at the Athashri retirement village in Baner, on the outskirts of Pune.
Photographs: Danish Siddiqui/Reuters

"There is a margin to be made but today the returns are not as good and we would like to improve that," said Ankur Gupta, joint managing director at Delhi-based Ashiana, which has built three retirement home projects in India.

The biggest challenge for the emerging senior living sector is the social stigma associated with elderly family members living on their own.

"Twenty years ago the social fabric of India was very different as we were still a closed economy," said Abdulla Kagalwalla, chief financial officer at Texas-based Signature Senior Living, which in 2010 tied up with Covai to build and manage retirement homes in India.

"As the economy opened it brought about a great social change, and an increase in the education and remuneration of middle class families caused a dramatic shift in thinking."

The share of households in India with five or fewer members rose to 69 per cent in 2011, from 60 per cent a decade earlier, according to government data, showing a shift away from the traditional multi-generational family system. 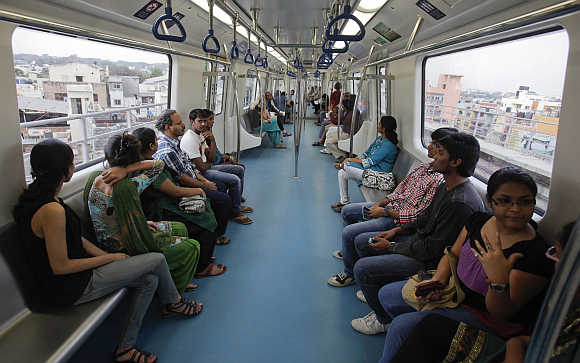 Image: Paranjape plans to build a retirement home in Bangalore. A view of a Metro train in the city.
Photographs: Vivek Prakash/Reuters

Later this year, Pune-based Paranjape, which operates the Athashri project and three others in the city, will open a home in Bangalore and start building three more in south India.

"When we launched our first project in 2000 it was very difficult to sell but now we have more than 1,500 families staying with us," said Managing Director Shashank Paranjape.

At Paranjape's Athashri, where the Gokhales live, corridors with handrails, anti-skid tiles, a doctor's room and a 24-hour ambulance set it apart from ordinary housing. All homes have multiple red emergency buttons and a rope in the bathroom for calling a caretaker.

It costs up to 30 per cent extra to build senior homes because of the additional features and amenities but they sell for 15 to 20 per cent more than comparable regular homes.

Suresh and Rekha Chitre spent their savings of Rs 4.3 million ($71,900) to escape the chaos of Mumbai by moving to Athashri in Pune but are struggling to adjust to life in a retirement home.

"It is more comfortable here but everyone is old and always complaining about aches and pains," said Suresh Chitre, 67, who misses interacting with people of different age groups. "In the last few months four people died and that can get depressing."