Sign in  |  Create a Rediffmail account
Rediff.com  » Business » How to make Varanasi fit for the 21st century 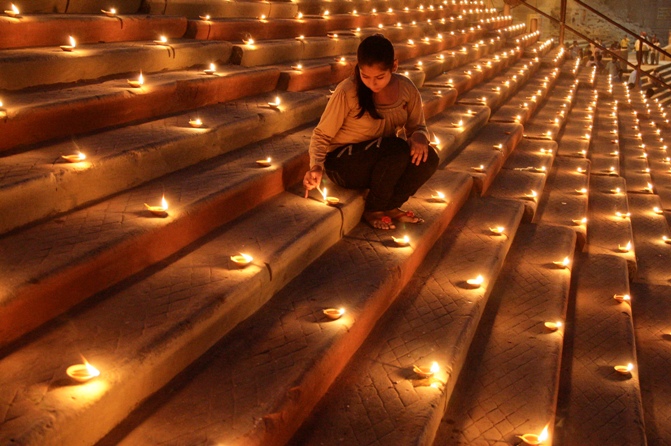 Image: A Hindu devotee lights an earthen lamp on the steps of Sindhiya Ghat during the Karthik Purnima and Dev Diwali festival in Varanasi.
Photographs: Jitendra Prakash/Reuters Sanjeev Sanyal

If the so-called improvements had actually been made, Varanasi would have been reduced by now to Navi Mumbai or Delhi’s Dwarka, soulless products of a 20th-century ‘modernism’ that has been discarded everywhere except in India, rues Sanjeev Sanyal.

Despite its importance as a religious centre and tourist hub, anyone visiting Varanasi can see that it is a city crumbling from neglect.

Therefore, one hopes that some good will come out of all the attention it has attracted during the election campaign of 2014.

Whoever wins the contest will become an important national figure, and will presumably have the clout to make real changes.

But what needs to be done?

Although I have never lived in Varanasi, I have visited it several times and feel a strong emotional connection with it.

My family is of Bengali extraction, but it settled in Varanasi in the mid-18th century.

We continued to live there till the British colonial government confiscated our ancestral homes and drove us out in 1929 for participating in the freedom struggle. 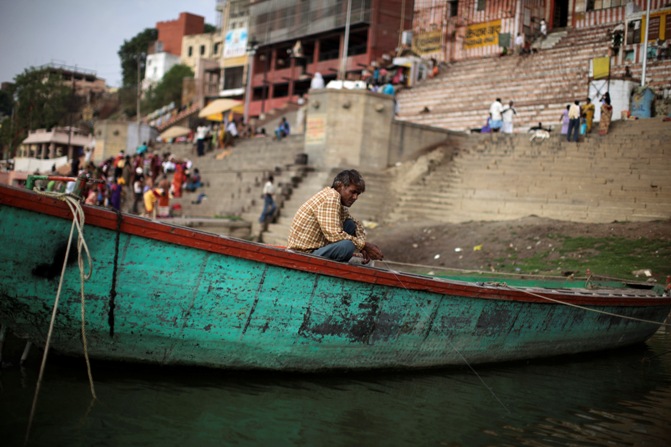 Image: A man fishes at the banks of river Ganges in Varanasi.
Photographs: Jorge Silva/Reuters

Many male members of the family went into hiding or were jailed, some never to return.

Yet, I found many lingering reminders of my family in the winding lanes of Madanpura -- including the Bengali Tola Inter-College, one of the first ‘modern’ schools in north India, established in 1854 by my forefathers.

I have often asked town planners and local officials about what could be done to revive Varanasi.

The answer usually is that not much can be done, because it is such an antique city, with narrow winding lanes, that it is impossible to introduce any modern infrastructure.

The best one can hope for is that we build ‘planned’ extensions to the city with wide roads and ‘modern’ amenities so that the old city can be ‘decongested’ -- that is, it would be a great city if only we can introduce neat suburban houses and broad boulevards suitable for cars. 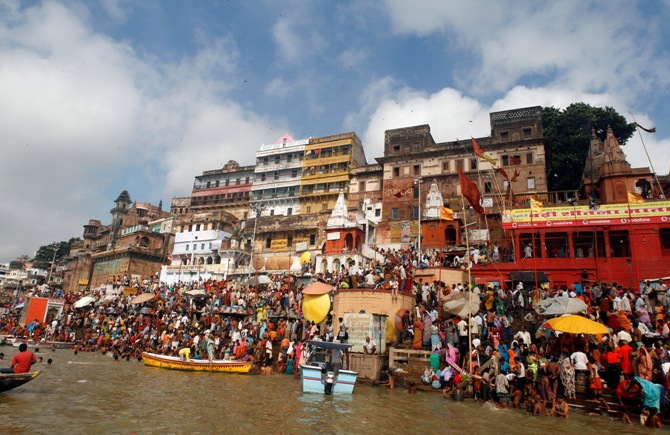 Meanwhile, the old city is seen as a legacy problem to be kept somehow alive for tourists.

There is a problem with this framework of thinking.

If the so-called improvements had actually been made, Varanasi would have been reduced by now to Navi Mumbai or Delhi’s Dwarka, soulless products of a 20th-century ‘modernism’ that has been discarded everywhere except in India.

So how should we think of Varanasi in the 21st century?

Today’s leading urban thinkers no longer advocate cities as machines that must be run to a ‘master-plan’ that maximises efficiency.

Instead, cities are seen as evolving ecosystems that organically mix and match many ingredients.

Thus, a successful city is one that encourages human interaction, has accessible public spaces, conserves historical heritage, is conducive to walking, creates human capital/diversity and, horror of horrors, mixes commercial and residential uses. 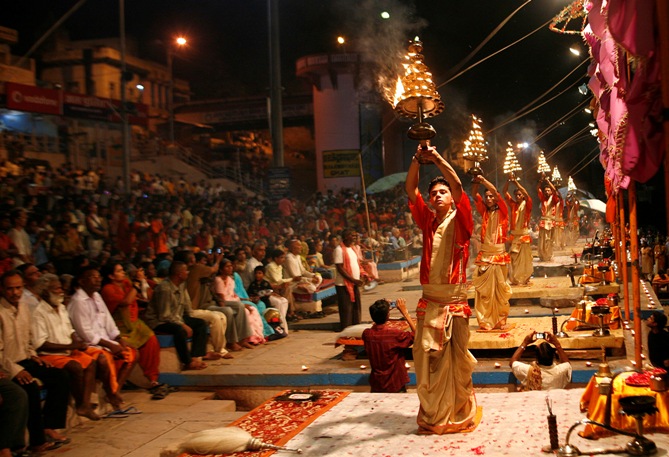 When seen from this lens, the urban design of Varanasi no longer seems a problem.

The narrow winding lanes and their idiosyncratic twists are a nightmare for cars but make perfect sense on foot.

The ghats provide public spaces open to all strata of society and actively utilise the riverfront, something most modern Indian cities fail to do.

The multiple layers of history, the organic mix of halwai shops, temples and homes, and the bubbling mix of people from different backgrounds give Varanasi a personality that would otherwise be impossible to create by deliberate design.

Moreover, the urban cluster is more than just the old city strung along the ghats. 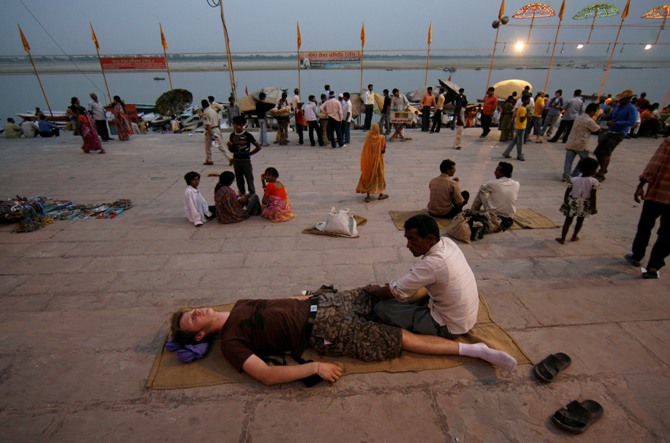 Image: An Indian masseur gives a massage to a tourist on the banks of river Ganges in Varanasi.
Photographs: Adnan Abidi/Reuters

For instance, the city is also home to numerous educational institutions, including Banaras Hindu University, one of India’s top universities and the largest residential university in Asia.

The city is also at the heart of India’s transportation network.

Ancient India had two major highways -- the Uttarapath, or northern road, and the Dakhshinapath, or southern road.

These highways met just outside Varanasi at Sarnath. Incredibly, two of India’s most important highways still meet at Varanasi: NH2, which roughly follows the old Uttarapath, and NH7, which runs all the way down to Kanyakumari.

A short distance away is Mughalsarai, the nerve centre of the country’s railway network.

As one can see, Varanasi already enjoys most of the ingredients required for a successful urban ecosystem. 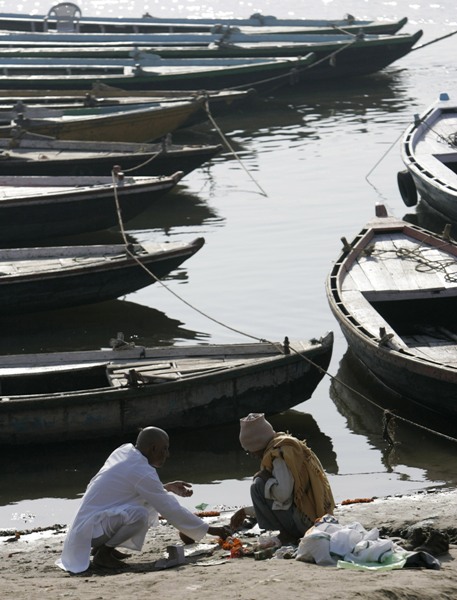 Image: Hindu devotees perform rituals on the banks of river Ganges on an early morning in Varanasi.
Photographs: Fayaz Kabli/Reuters

The problem is not its urban design and, consequently, the solution is not better ‘planning’ but better ‘management’.

There is a big difference between these two approaches.

The management approach to Varanasi would emphasise the following.

First, the single most important thing would be to clean up the city.

For the most part, this is about better management of existing municipal services -- garbage clearance, drainage, controlling stray animals and so on.

Second, the surrounding river system needs to be revived. People usually pay attention only to the Ganga, but the city has other rivers.

In fact, its very name is derived from the Varuna and the Asi rivers.

The Varuna is still a discernable stream, but the Asi has been reduced to a sewage-filled drain. 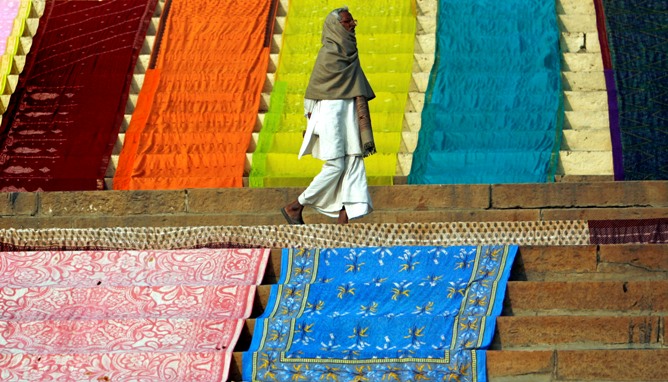 Image: A man walks past Saris placed on the ground for drying by washermen on the banks of river Ganges in Varanasi.
Photographs: Arko Datta/Reuters

Many locals who live next to the Asi were surprised when I told them that they lived along its banks.

Third, the city’s intellectual cluster needs to be enhanced.

The current fashion is to build new universities in sprawling campuses in remote locations.

But this disperses intellectual clusters.

It is far better to enhance existing hubs like Varanasi.

This will need investment in new institutions, conference facilities, laboratories within a short distance of the city, and a deliberate effort to encourage the exchange of ideas. 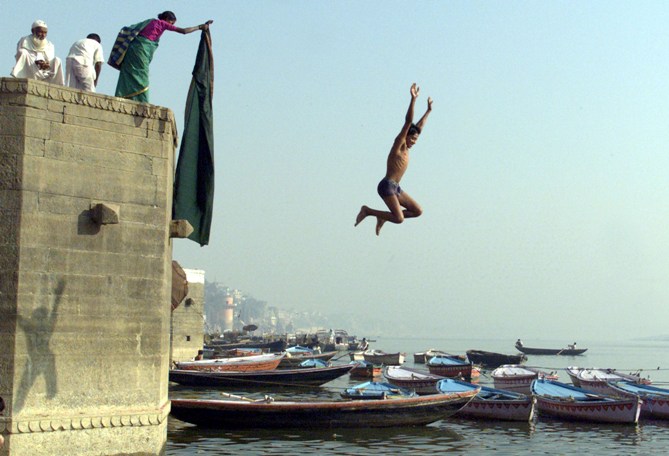 Image: An Indian youth jumps into the water on the banks of Ganges in Varanasi.
Photographs: Kamal Kishore/Reuters

Fourth, large parts of the old city should be pedestrianised.

Some motorable roads can be left in place for emergencies and for bringing in supplies; but a clean, safe walking network would transform the feel of the city, as happened in the medieval city centres of Europe.

Perhaps an elevated monorail could be built to run parallel to the river at a distance of half a kilometre inland so that locals and visitors can go about their business by combining walking with a reliable public transport backbone.

It is not merely the passage of time; in many cases, there is thoughtless defacement from advertising hoardings and unauthorised construction. 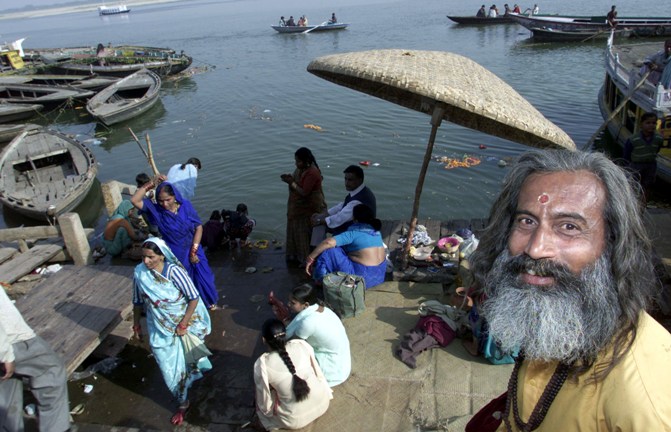 Image: A Hindu holy man stands on the banks of the Ganges in Varanasi.
Photographs: Kamal Kishore/Reuters

As the reader will recognise, the approach of ‘managing’ Varanasi organically and adding to its ecosystem is fundamentally different from the approach of adding ‘planned’ sectors and widening roads.

Looking at Varanasi from a post-modernist lens resolves one of the great mysteries of Indian history -- why did ancient Indians not build rigidly planned cities after the Bronze Age?

It is now known that the Harappan cities were abandoned around 2000 BC due to climate change and the drying of the Saraswati river (and not marauding central Asians).

Some of the refugees moved east to the Gangetic plains where they built great Iron Age cities, but historians have perpetuated the idea that these cities were somehow inferior to the Harappan cities.

From a post-modernist view, however, the Iron Age cities were just as successful as urban centres.

Indeed, the great Harappan cities were abandoned after just a few hundred years, whereas the Iron Age city of Varanasi has survived more than three thousand years and, perhaps with a bit of care, may survive another three thousand.

Sanjeev Sanyal is an economist, urban theorist and bestselling author