Next
Nikhil Inamdar in Mumbai

India’s largest lender, the State Bank of India(SBI) has joined the ranks of a host of other headless public sector undertakings (PSU) after its chairman Pratip Chaudhuri retired on the 30th of September without a successor being notified. 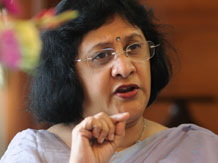 Arundhati Bhattacharya was set to take over as the new head, but her appointment has been delayed. This is in some sense keeping alive the unholy tradition at SBI.

The appointment of chairmen was delayed on the last 2 occasions as well, when A K Purwar and O P Bhatt retired. On both occasions an interim charge was given to others till the permanent chairmen took control.

A former senior banker with SBI who spoke to Business Standard on conditions of anonymity said it is the finance ministry’s ad hoc decision to seek a relaxation to the eligibility norms for selection, that’s led to this delay.

“Arundhati might be appointed eventually, but why was a very clear policy twisted to make ineligible persons eligible?

If you wanted a broader set of people to be interviewed, why didn’t you go down to the DMD level from where chairmen have been selected in the past? We need to bring in a great degree of transparency in these high level appointments that’s currently missing.”, says the former banker.

The finance ministry had sought an exemption from the current regulatory guidelines because only one of the four SBI Managing Directors, i.e. Arundhati Bhattacharya was eligible for the chairman’s position.

As per the norms the candidate has to have at least 2 years of service left before retirement which ruled out the other three MDs.

“But there is a larger question of the lack of governance with these decisions. There are established policies in place, but these are often twisted to give an unfair advantage to someone. Who you know in the ministry, what pulls and pressure tactics you deploy can make a big difference in such appointments. The entire process undermines governance standards that should be in place at such large banks” adds the banker.

High level appointments in Public Sector Banks are done by the ACC or the Appointments Committee of the Cabinet headed by the Prime Minister wiith the Home Minister and the administrative ministry in charge as its constituents.

This is one of the reasons why PSU banks cannot plan succession either. And delays in such appointments are often a rule rather than an exception because the bureaucracy is never held accountable for not taking timely decisions.

Banks aside, at least a dozen public sector undertakings have been headless for a span ranging from 3 months to 3 years. According to a July report by Governance Now, HMT Ltd hasn’t had a regular CMD for 2 years, MMTC for 2.5 years, NALCO for 6 months and BHEL for 7 months. In the past too, other major PSUs like Coal India and ONGC have had to function without a chairman for months on end often leading to delays in critical decisions.

A highly placed source in the PESB or the Public Enterprises Selection Board which is a nodal body for the appointment of top management posts in PSUs says the board usually sends out recommendations at least 4 to 6 months before the positions fall vacant. The delays begin after this.

“The ministry in question and bodies like the CVC have to take the final decision. We can only make recommendations which can be turned down also” says the PESB official.

The vacancy list on the Public Enterprises Selection Board shows posts for at least 32 top management positions, where the last date of receipt for the application has lapsed.

“It has been seen in many cases that people are ready to pay huge amounts of money to become the chief of a PSU because it is a very lucrative post. Even ministers prefer to keep the post vacant, or they temporarily appoint someone and delay the process of final selection. So there are many games that are played,” Subramanian told the website.

The politicisation of public sector appointments is evident not just at the time of filling such posts, but also in instances where appointees haven’t been given extensions or been asked to resign, for not being malleable to political diktats or for clashes with ministers.

Former ONGC chairman Subir Raha had a public spat with the then Oil Minister Mani Shankar Aiyer and was not granted an extension. So was Sarthak Behuria of IOC and Satnam Singh, the young chairman of PFC who was dramatically booted out last month.

Clearly, this lack of transparency is not only undermining governance, but also business activity at a time when the economy is doldrums. And public sector undertakings, rather than being at the forefront of kick starting economic activity, have been left to battle entirely avoidable challenges of leadership.