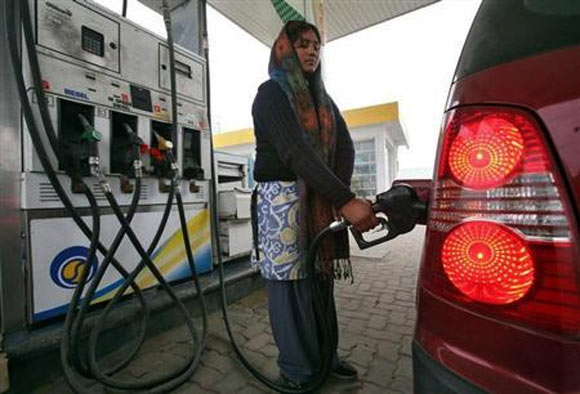 Image: An employee fills a vehice with petrol at a fuel station in Jammu.
Photographs: Mukesh Gupta/Reuters

Petrol prices are likely to be cut by over one rupee a litre early next week as appreciation in value of rupee against US dollar and fall in global oil rates has made imports cheaper.

However, diesel rates will go up by 50 paisa per litre in line with the practice of raising prices by small quantum every month to wipe away subsidy on the fuel.

State-owned oil firms are due to announce revised petrol and diesel prices on March 31.

"Rupee has appreciated to Rs 60.50 to a US dollar from Rs 61.44 and simultaneously international gasoline rates have dipped from $118.09 per barrel to $115.73. The twin factors will lead to a reduction in petrol price on Monday," a source with direct knowledge of the development said. 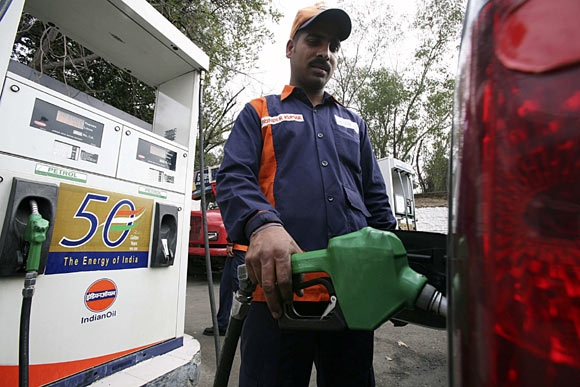 Image: An employee fills a car with petrol at a gas station in Jammu.
Photographs: Mukesh Gupta/Reuters

The government, in June 2010, had given oil firms freedom to fix petrol prices on 1st and 16th of every month based on average global oil prices and foreign exchange rates in the preceding fortnight.

It had in January 2013 authorised oil firms to hike diesel prices by 40-50 paisa per litre every month till such time that the losses on the fuel are wiped out. Diesel prices have risen on 14 occasions since then.

Election Commissioner H S Brahma, who had earlier this month stated that government cannot discontinue the monthly increases in diesel prices as it would tantamount to populism, today said oil companies can revise petrol prices in line with the practice they have been following since June 2010.

Oil companies can revise petrol prices without coming to the Election Commission, he said.

Petrol and diesel prices were last revised on March 1 when rates where hiked by 60 paisa and 50 paisa respectively. Petrol currently costs Rs 73.16 a litre in Delhi while diesel is priced at Rs 55.48 per litre.

Oil firms currently lose Rs 7.16 per litre on sale of diesel but the losses will come down significantly on back of softening international oil rates and rupee appreciation.

On the strength of softening oil rates and rupee appreciation, Oil Minister M Veerappa Moily has informed Prime Minister Manmohan Singh that there is no likelyhood of a hike in petrol prices during the next two months when the ruling Congress party faces a tough general elections.

companies to raise diesel price by 40-50 paise per litre each month until the under-recovery or revenue losses were wiped out.

If the government were to decide on halting the monthly diesel price increases, an approval of the Election Commission will be required, he told the Prime Minister.

Elections to elect a new government at the Centre will begin on April 7 and end on May 12.

Tags: Cabinet Committee on Political Affairs , Election Commission , Congress party , Veerappa Moily , Re
More
© Copyright 2022 PTI. All rights reserved. Republication or redistribution of PTI content, including by framing or similar means, is expressly prohibited without the prior written consent.
Print this
article