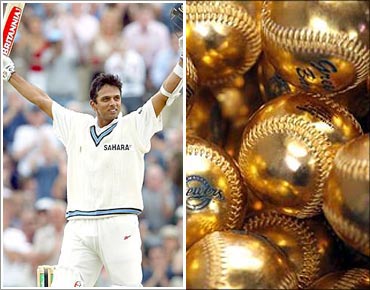 "Men, I tell you, they are either good-looking or they talk well. But, rarely both," said my roommate, after rejecting another prospective suitor shortlisted by her family.

"Oh, so you are back from your weekly rejection routine?" I asked.

"So you ran out of their faster than a Borivali auto-rickshaw driver!"

"And the chap just kept talking about buying gold. Seemed to be obsessed with it."

"Yeah. He even told me that Rahul and gold are the last men standing." 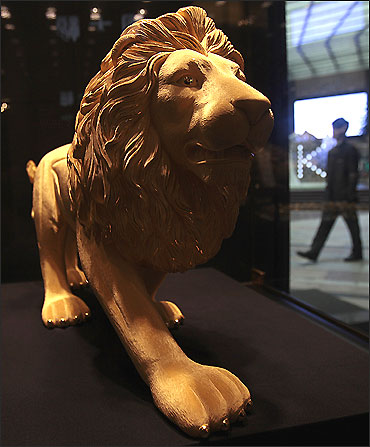 "Oh. That was an interesting perspective. So that makes him a good talker as well!"

"Arre, he was just talking about gold. He hardly has any money invested in it," she said with an ironic smile on her face.

"But I liked the way he put it. Rahul Dravid and gold are the last men standing."

"Well, as far as Dravid goes, the answer is obvious."

"Gold prices have fallen big time over the last 2-3 days. Gold had touched an all-time high of more than $1,900 per ounce (one troy ounce is equal to 31.1 gm). But since then has fallen to around $1,730 per ounce. Basically, over three days, gold lost around 9 per cent."

"Well some say that the bubble has burst!" 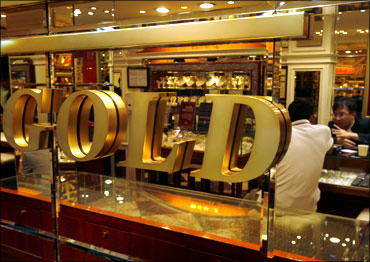 "But was gold a bubble?"

"When gold prices go up, it is always a bubble. But that is beside the point."

"What do you mean by that?"

"See, when you invest in something, where does the return come from? When you invest in a bank fixed deposit, the bank takes that money lends it to someone at a higher rate of interest than it is offering you. That is how you make money on it," I told her.

I continued: "When you invest in a stock you are basically banking on the fact that the company will continue to do well in the days to come and it will earn more money than it has in the past and that will ensure that its stock price goes up. When you invest in metals like copper or silver, you do that because these metals because they have industrial uses. So you hope that the demand for these metals keeps going up, whereas the supply doesn't go up as fast as the demand," I explained.

"But what about gold?" she asked. 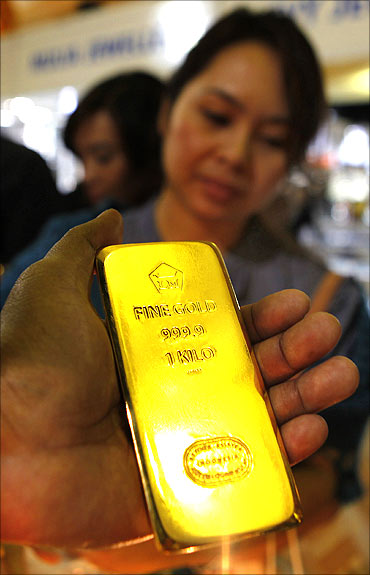 "Yeah, gold. Now if you look at gold, it is a totally useless asset. It doesn't have many industrial uses like other metals. As Peter Bernstein writes in The Power of Gold, 'gold in contrast, has always been useless for most practical purposes that call for metal, because it is so soft. With only 125,000 tonnes (the book was published in 2000. Now the number is around 165,000 tonnes) of it in existence, gold is also too scarce to have many uses'," I said, quoting the author.

"What are you hinting at?"

"What I am trying to say is that ain case of other assets there is a clear 'earnings potential' as I explained above. But in the case of gold there is none. So people essentially buy gold in the hope that more people will be tempted to buy gold in the days to come and that in turn will ensure that the price of gold will continue to go up. And that makes it a bubble," I said.

"I added: "But as George Soros, the biggest speculator of them all, once wrote, 'Nothing is quite as profitable as investing in an early stage bubble'."

"But why have people turned to gold in the last few years?" she asked. 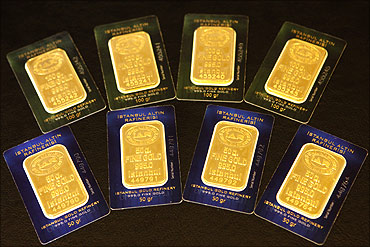 "Countries and governments around the world have been trying to print money and pump it into their economies. They are doing this in the hope that banks will lend money to people, who in turn will buy things from companies. Once people buy things, companies will earn more, and that in turn will mean they will recruit more people, which in turn would mean lower unemployment. Lower unemployment would also mean that people will spend more money. And this would mean a more robust economy," I tried to explain.

"But that hasn't seemed to happen?" she interrupted.

"Nope. Banks, after having lent their hearts out between the years 2000 and 2007, were very cautious this time around. Once bitten, twice shy."

"But when money is printed, left, right and center and dumped into the economy, it is likely to lose value. And people don't like their money to lose value. So they buy gold." 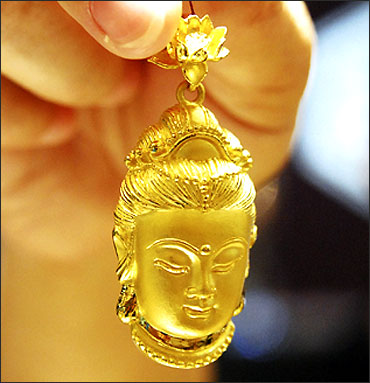 "Over the centuries people have used various things as a store of value. 'Tobacco in colonial Virginia, sugar in the West Indies, salt in Abyssinia, cattle in ancient Greece, nails in Scotland, copper in ancient Egypt and grain, beads, tea, cowrie shells and fishhooks too', points out Murray Rothbard in What the Government Has Done To Our Money."

"But a lot of these things are fragile and difficult to store. 'Gold has clear advantages. Unlike cowrie shells, which were the main form of money for centuries in parts of Asia, gold is remarkably durable and does not easily fragment,' writes Peter Bernstein in The Power of Gold," I said.

Carrying on, I told her: "Almost all of gold ever mined is still around. Gold is chemically inert and that explains why its radiance is forever. It s also the best conductor of electricity. But the fact is that gold is available in an extremely limited quantity and hence is too expensive to be used industrially. Also gold is very dense -- a cubic foot of gold weighs around 500 kg -- and this ensures that very little of it is required to carry a lot of money around or a store a lot of value," I explained. 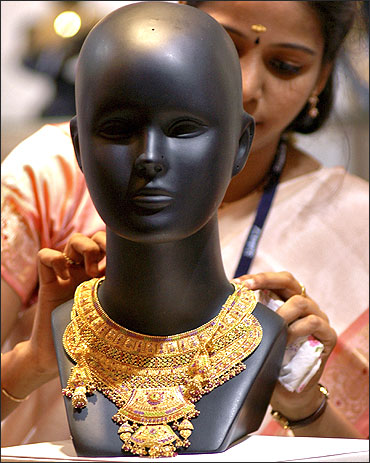 "Also, if you were to store your wealth in the form of vegetables or grains, etc (which is not a bad idea given the rate at which prices are rising), there would the risk of your wealth rotting and stinking. Gold does not rot. Gold does not stink. And over the years it has always held its value. So whenever people see governments around the world destroying paper currency people buy gold."

"Unlike paper money or electronic blips on computer screens that are the modern world's most common form of money, gold cannot be created out of thin air. Also hoarding gold is not a natural infringement on the rights of others. As a blogger, FOFOA, wrote in a piece titled The Value of Gold, 'And because it is not used for many things other than mere hoarding, the act of hoarding gold is not an infringement on the natural rights of others'," I said.

"So," I added, "if you were to hoard foodgrains like rice or wheat, so as to preserve the value of your wealth, it wouldn't go down well in a world which adds 79million people every year. If you hoard a metal like copper, you will be taking it away from its genuine industrial users. So in the end people hoard gold, whenever there is crisis of confidence on the paper currency."

"Hmmm. But why have the prices been falling over the last few days?" 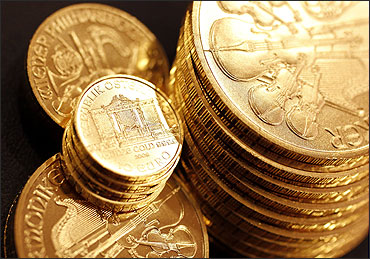 "Well, prices rarely go up in a linear fashion. At some stage investors start booking profits. And when they do that prices fall, which is the case right now. When prices fall, other investors find the price attractive and they get in, driving the prices up again."

"Okay. So gold prices will go up again?"

"Of course, they will! Yesterday I explained to you the amount of debt countries around the world have. How will they ever repay that money? The only way out for them is to print money or default. In either case, gold prices will go up."

"Yes, central banks around the world are also getting a part of their foreign exchange reserves into gold. As Jeff Clark of Casey Research recently wrote, 'South Korea just disclosed a big bullion purchase, buying 25 tonne last week, more than doubling its holdings. Mexico, Russia, and Thailand have already been major buyers this year. In fact, year-to-date, governments have almost tripled their net gold purchases over 2010, increasing their holdings by 203.5 tonnes this year, up from a 76-tonne rise last year'."

"Of course, every investment is a risk. The prices may continue to go down for a while before they go up again. So don't bet your life on gold and buy every time the price of gold falls. But do remember as Bill Bonner and Addison Wiggin write in The Empire of Debt, 'There is never a good time to die, nor is there a good time for a crash or a slump. Still, death happens. Be prepared. Say something nice to your mother. Offer a bum a drink. And buy gold'."