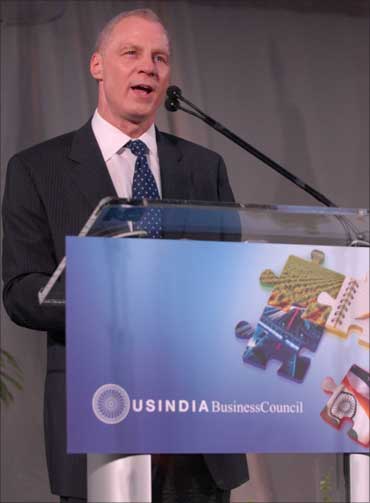 If India helps in creating more jobs for American companies, then these companies will ensure that the outsourcing issue is resolved smoothly.

"I am telling you what the chairman of General Electronics told India. You buy my turbines, and I'll take care of the outsourcing issue," Ron Somers, president, United States-India Business Council, told rediff.com on the sidelines of a conference on corporate co-creation in New Delhi, on Monday.

He said if India helped create more jobs for American companies, then slowly, there wont be any resentment against jobs going to India and the American people will also be assured that it is a country that is helping to create more American jobs.

"It is basically a domestic issue. The GEs, the Boeings, the Caterpillars, all of which have struck deals with India that will generate jobs back home will manage the political blowback," Somers said. 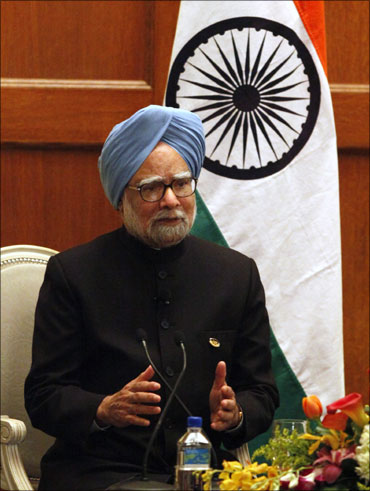 Even while analysing President Barack Obama's visit, he was candid.

"This is basically to strengthen his hands at the domestic level.

"This is a genuine strategic partnership and he wants to sell that idea back home. He wants to show the American people that a partnership with India will generate jobs back home," he said.

Asked what India could sell to the US, and what kind of market the US could be to India, he said services were the only thing he could think of.

"When you compare US-India trade with US-China trade ($50 billion and $430 billion), it is just one tenth.

"That is because India is not an export-led economy, and China is.

"What India needs to right now is to develop its infrastructure, education sector and build more good colleges.

"It is in these areas that a partnership with America can be useful and important to India," he said. 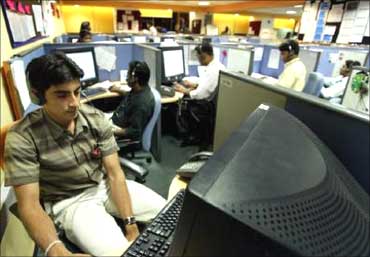 Education, especially, he said, can be a major sphere of co-operation between  the two countries.

"But the first step for that however is the passage of the foreign education bill. tHat is important," he said.

Looking back to the amount of deals signed between the two countries, he said it was significant that there have been deals worth close to $15 billion.

"If you look back 10 years ago, we barely knew each other. When I came to New Delhi and visited a ministry, there was one fax machine. Now look at where India is, and where the ties between the two countries are," he said.

On the whole, the partnership between the two countries will be beneficial to both, making them prosperous, he said.

"In our case, partnership equals prosperity," he said.