Sign in  |  Create a Rediffmail account
Rediff.com  » Business » How many poor people live in India? No one knows! 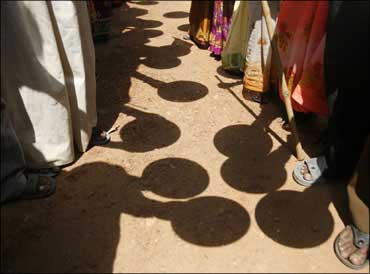 A survey by the Indian government in 2002 to determine households below poverty line (BPL) left out many poor families.

Nearly a decade later, the Union ministry of rural development (MORD) is trying to set the wrong right.

But it is unable to decide on the criteria for identifying poor households. As a consequence, the BPL survey that was to begin in April this year has been rescheduled for June.

The survey needs to be completed in a year because it will be used as a reference tool in the 12th Five-Year Plan and in the Right to Food Bill, which is in the final stages of drafting.

The 10th and the 11th Five-Year Plans had missed this mandatory survey because of a Supreme Court stay. 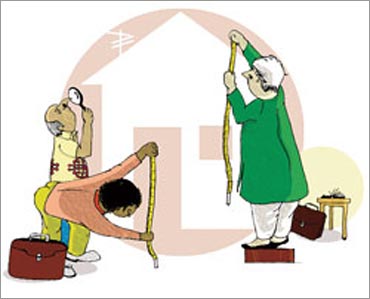 State governments carry out the survey on the basis of guidelines and criteria evolved by MORD.

In March, a Parliamentary committee expressed concern about the confusion over the number of poor families and asked MORD to update its BPL data by September 2011.

But there is a hitch in starting the new survey.

"The government is yet to take decisions on some key issues vis-a-vis the criteria for identifying the poor," says P K Padhy, chief economic advisor to the ministry. 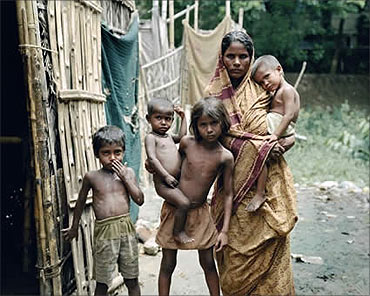 An expert committee was set up two years ago to evolve new criteria. But the methodology suggested by the panel, headed by former bureaucrat N C Saxena, was found to have a greater scope for error during a pilot survey, say officials.

In a parallel development, the Supreme Court, in March, asked the government to explain lack of universality while counting the poor (schemes or subsidies are not available to all the poor, only to BPL cardholders) and the justification for the Planning Commission's cap on the number of BPL families a state can have.

The cap is based on the assessment of the National Sample Survey Organisation that estimates the number of poor in the country.

The Apex Court also suggested states could proceed with BPL survey without waiting for guidelines from the Centre. MORD has time till April 19 to reply.

Poor, but not entitled

The reason for framing new criteria for determining BPL families is the complaints arising from the 2002 survey. 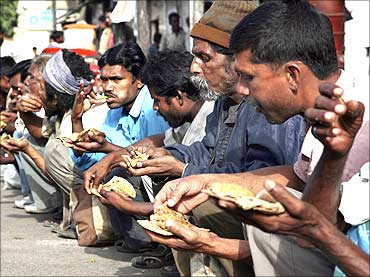 Many pertain to BPL cards being misappropriated. In November 2009, the Planning Commission reported more than 40 per cent households in major states have wrong ration cards with BPL households holding above poverty line or APL cards and vice versa.

The 2002 survey had used 13-point criteria to determine if a family is below poverty line. Instead of the previous criteria based on consumption and income, this survey used socio-economic indicators such as the size of landholding and educational status.

"The criteria used in this system excluded families with a toilet in the house and those who have school-going children. These contradict ongoing government programmes like Total Sanitation Campaign that provides toilets to rural households and Right To Education," says Dipa Sinha of the Right to Food Campaign.

Availing facilities under welfare schemes signified getting dropped from the BPL list.

Between 2002 and 2010, there were three independent government surveys to determine the number of poor. All differed widely. 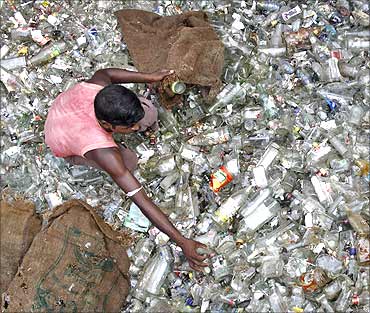 The N C Saxena panel said India's poverty index was 50 per cent. The other two committees estimated it at 77 per cent and 37.2 per cent.

Subsequent to the expert group recommendations, member of the country's National Advisory Council, Jean Dreze, along with Ritika Khera of the Centre for Development Economics in Delhi, suggested simpler criteria.

Their report suggested "a quasi-universal approach wherein all households are eligible for BPL status unless they meet pre-specified exclusion criteria". 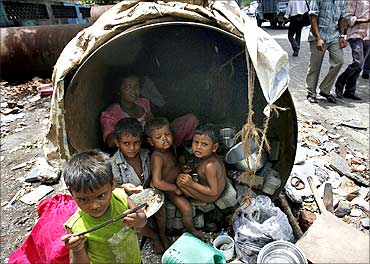 The report said there should be no cap on the number of BPL households.

In 2010, a pilot survey was conducted to determine the most suitable criteria. The Social Sciences Centre at the Jawaharlal Nehru University in Delhi conducted the survey covering 254 villages spread over four districts in each state.

"We picked two districts from the richer part of the state and two from the poorer part," says Himanshu, assistant professor at the centre.

The survey used a questionnaire that included suggestions from the Saxena panel report, Dreze-Khera report, and the Planning Commission.

State officials gathered the data which were analysed by Himanshu's team. Based on this analysis, a Cabinet note was prepared on the most pertinent indicators. 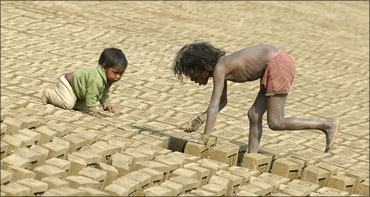 The report is yet to be tabled in Parliament.

MORD sources say the note lists eight indicators to decide whether a family is below poverty line. The method uses socio-economic indicators but without basing them on points; the Saxena committee had proposed awarding points against certain criteria with a cut off score that would make a family eligible for BPL status.

Saxena is critical of the latest report. "This method is not an improvement and does not have the right indicators because it does not define poverty," says Saxena.

The expert group report has detailed procedures and directives for the government to follow at all levels of data collection and publication which would have increased transparency and effectiveness of the whole exercise, he adds. The point system is important for gathering exact information, he says.

Himanshu disagrees. He says the scoring system leaves scope for greater error and that the method proposed by his team is simpler. 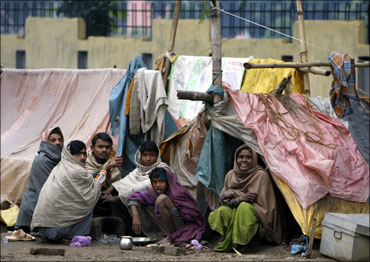 One of the biggest drawbacks noticed during the pilot survey was that the targetted approach of the ministry leaves scope for high margins of error, no matter what the selected indicators are.

Even in the controlled experiments, the error margin was 25 to 30 per cent. "This error is only going to get amplified when the survey is carried out on a large scale," he warns.

Capping the number of poor households, too, is a contentious issue with many states demanding expansion of the list. For instance, in January 2011, Bihar's Deputy Chief Minister Sushil Kumar Modi sought an independent commission to identify BPL families.

The Centre has fixed the number of BPL families in Bihar at 6.5 million; the state says it has 14 million such families.

Saxena insists government must cap the number of poor. Otherwise their numbers would be inflated, which is a "natural fallout of populist tendencies that abound in a democracy". 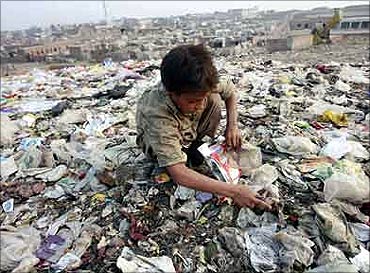 He adds the problem is not with the indicators alone. The collection of data at panchayat and block levels, as suggested by the expert group, would prevent corruption and wrong allocation of cards, he adds.

Himanshu says the rift between the Centre and the states is the result of inflated figures alone. "This has more to do with the fact that the cap is derived from an estimate of income and consumption while states conduct door-to-door surveys based on socio-economic indicators," he says, while adding that consumption data cannot be co-related with socio-economic indicators.

But Saxena says that misreporting of BPL households is a result of data collection being carried out at the state level, instead of the block and panchayat level. The confusion over how to identify BPL families continues.

Others who have carried out BPL surveys in 2010 like Raj Kishore, advisor to the Right To Food commissioner, says, "While covering 1,273 households in two districts of Orissa we noted a vast difference in the 'poor' percentile depending on the method used."

The survey was carried out in the two poorest of districts -- Kalahandi and Korapur -- in 25 villages covering six gram panchayats. Following the expert group's recommendations, of all the houses surveyed only two were automatically excluded while 14 per cent fell within the category of below poverty line. 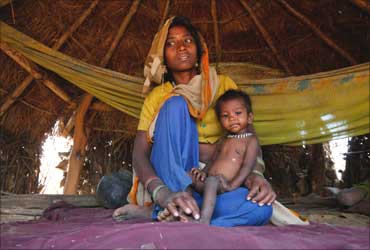 "All the 1,200-odd households surveyed are visibly poor and through another method we found above 80 per cent of the households come under BPL," says Kishore.

He adds that the alternative method was based on a paper submitted by Jean and Ritika. Here, of the five inclusion criteria provided if a family falls under even one, they are entitled to BPL benefits.

For example, in the 1,273 households, when the criterion of an adult member educated up to class V was taken, 83 per cent of the households came under BPL.

Similarly when the criterion of all the adult members of a family being involved in agriculture was taken, 87 per cent of the households fell under BPL. 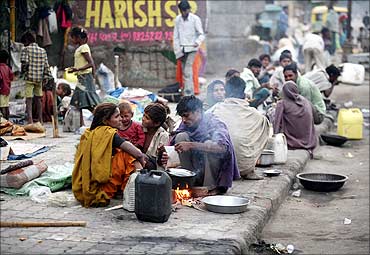 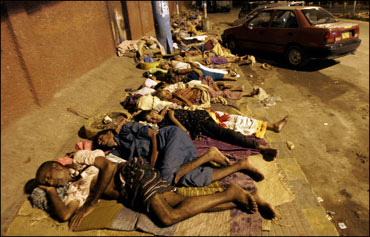 In addition to this, the group requires that the remainder of the households be surveyed through a scoring method. The point system is thus:

Those with the highest points get included first. 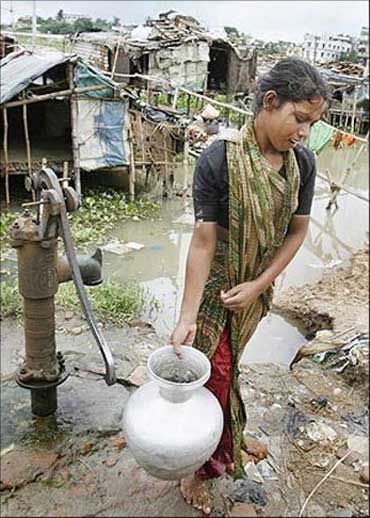 This method claims points are detrimental to poverty elevation.

In addition to a list of asset amenities like electricity, piped water and a flush toilet -- these are referred to as baseline assets and are the basis of their exclusion formulae. 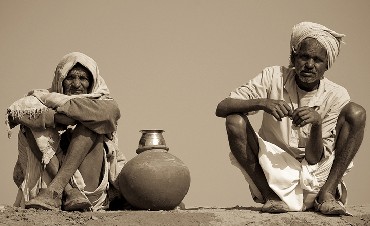 Combining the two this paper has suggested four ways of identifying the poor:

1. Exclusion approach: Reject a household if and only if it meets any of the exclusion criteria.

2. Inclusion approach: Select a household if and only if it meets the inclusion criteria.