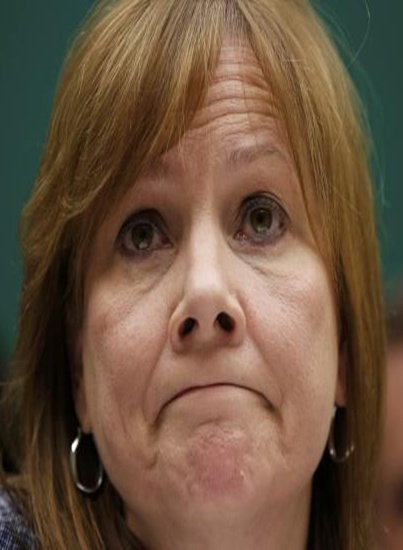 GM first learned of a problem with its ignition switches on Chevrolet Cobalts, Saturn Ions and other models in 2001, documents have shown, but took no steps to recall any cars until this past February.

General Motors Co CEO Mary Barra on Tuesday called her company's slow response to faulty ignition switches linked to at least 13 deaths "unacceptable," but could not give U.S. lawmakers many answers as to what went wrong.

After taking an oath at a House of Representatives panel, Barra kicked off the contentious hearing by declaring, "I am deeply sorry" for the company's failure to respond quickly to the safety problem and subsequent deaths.

The questioning became contentious at times but it did not appear to rattle the GM chief executive, who rose to her current job in January.

However, she repeatedly did not provide the answers House Energy and Commerce panel lawmakers were seeking, citing the company's ongoing internal investigation. 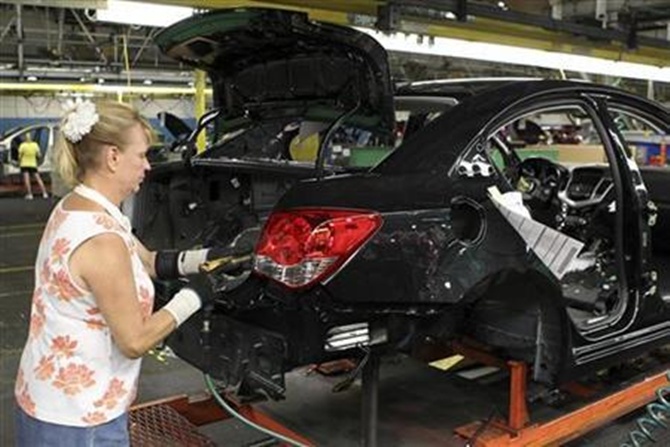 Image: A worker installs the rear tail light assembly on the new Chevrolet Cruze car as it moves along the assembly line at the General Motors Cruze assembly plant in Lordstown, Ohio.
Photographs: Aaron Josefczyk/Reuters

Still, during a nearly three-hour appearance on Capitol Hill, Barra testified again and again that GM had taken steps to prevent future safety problems from occurring.

She labored to remind lawmakers that the so-called "new GM" she heads was nothing like the "old GM" that failed to deal with faulty ignition switches for more than a decade.

Barra was called to testify as part of congressional probes into GM's delayed recall of 2.6 million vehicles that could have faulty ignition switches that unexpectedly cause engines to stall and prevent air bags from deploying and power brakes and power steering systems to operate normally. 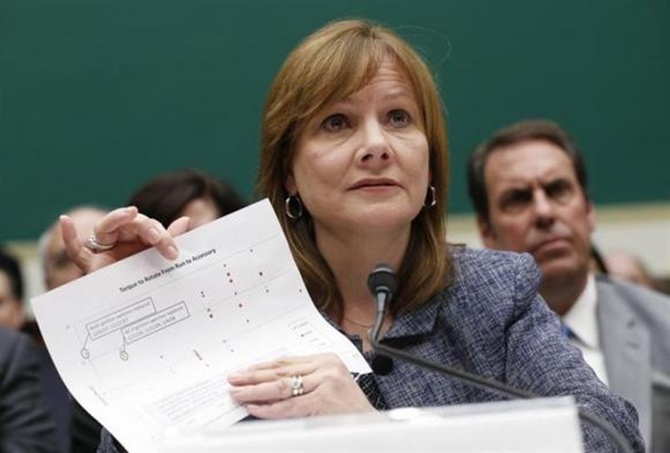 Barra also announced the company had hired a well-known consultant, Kenneth Feinberg, to examine what steps, if any, GM might take for families of crash victims.

Safety advocates said the move indicated the company was exploring setting up a victims' compensation fund.

For all the claims of GM having a new culture, however, Barra and the three executives seated behind her in the hearing room have notched more than 120 years of combined employment with the automaker.

Asked whether GM previously had a culture that would have put cost considerations over safety, Barra responded, "We are doing a complete investigation but I would say in general we have moved from a cost culture, after the bankruptcy, to a customer culture. We have trained thousands of people in putting the customer first." 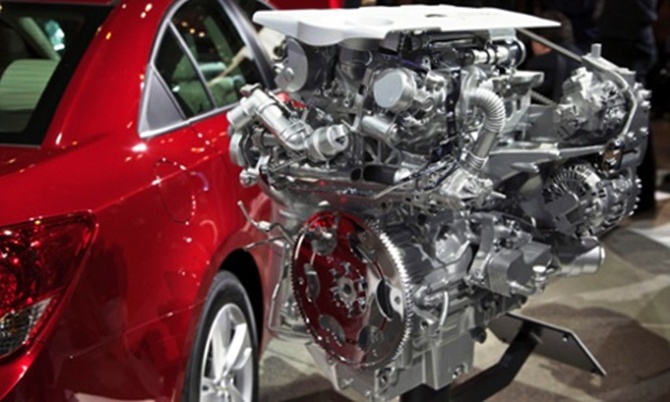 GM emerged from bankruptcy in 2009 with the help of a $49.5 billion U.S. taxpayer bailout.

Representative Henry Waxman, a veteran Democrat who has spearheaded past attempts to tighten U.S. laws on automotive safety, bluntly told Barra: "Because GM didn't implement this simple fix when it learned about the problem, at least a dozen people have died in defective GM vehicles."

Barra is scheduled to testify on Wednesday to a Senate panel, which also is investigating her company's handling of the defective ignition switches. The company also faces a criminal probe by the U.S. Department of Justice. 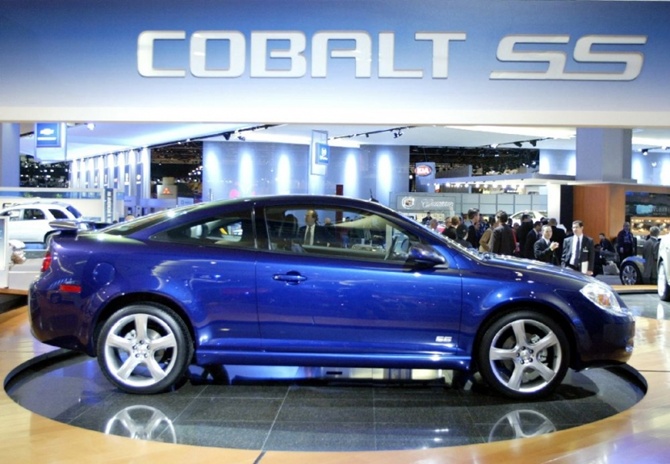 GM first learned of a problem with its ignition switches on Chevrolet Cobalts, Saturn Ions and other models in 2001, documents have shown, but took no steps to recall any cars until this past February.

Lawmakers are investigating why GM and regulators missed or ignored numerous red flags that faulty ignition switches could unexpectedly turn off engines during operation and leave airbags, power steering and power brakes inoperable.

David Friedman, acting administrator of the National Highway Traffic Safety Administration, tried to fend off suggestions that the agency failed to spot the problem, saying, "I wish these crashes were as simple as they seem to be."

Instead, Friedman said GM failed early on to share links it had established between the ignition switch problem and the non-deployment of air bags during crashes. 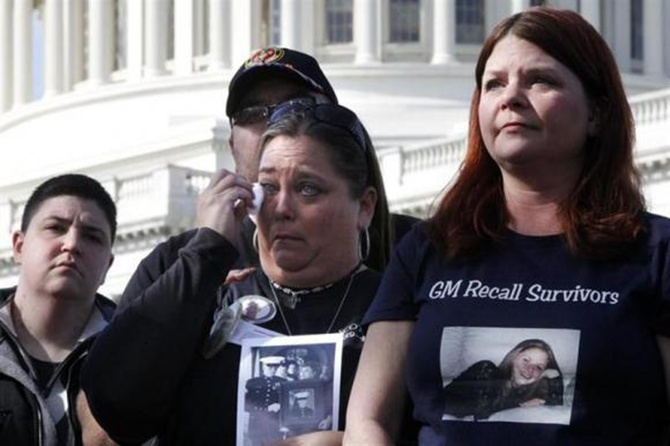 Families of victims killed in crashes involving GM cars held an emotional meeting with Barra in the company's Washington offices on Monday night.

The drama inside the packed hearing room, named the "John D. Dingell" room after the Michigan Democrat with a long history of advocating for GM, was heightened by more than 10 photographs of accident victims displayed against one of the walls. Some victims were from home states of members of Congress serving on the committee holding Tuesday's hearing.

Many family members have tried, unsuccessfully, to convince Barra to urge consumers to park all recalled cars and avoid driving them until repairs are made.

Laura Christian, whose daughter Amber Rose was killed in a 2005 Chevy Cobalt in Maryland, said in an interview after the meeting, "Everybody was crying the entire time" during the meeting. "There were horrific stories." 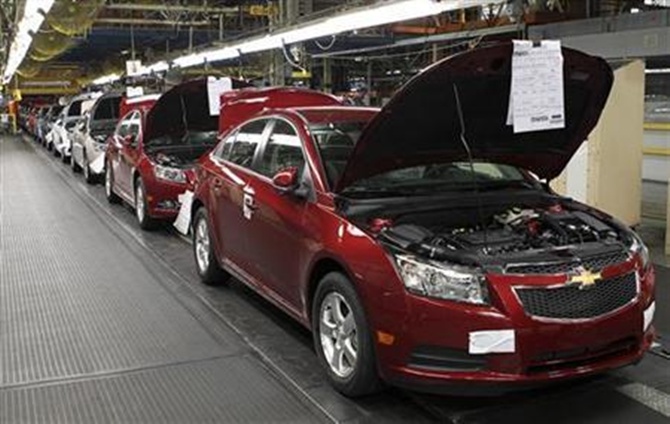 Barra reiterated during her testimony that it was safe to continue driving the recalled cars as long as no keys or other items are attached to the lone key inserted into the ignition.

GM's shares closed down 8 cents at $34.34 on the New York Stock Exchange on Tuesday.

On Monday the company said March sales rose 4 percent from a year ago, beating analysts' predictions of a 0.5 percent increase.

Industry analysts and some GM dealers, however, raised concerns that all the publicity about recalls could begin eroding sales in April.

Republicans and Democrats on the panel, who usually are at odds on most issues, were united in aggressively challenging Barra and GM's performance. 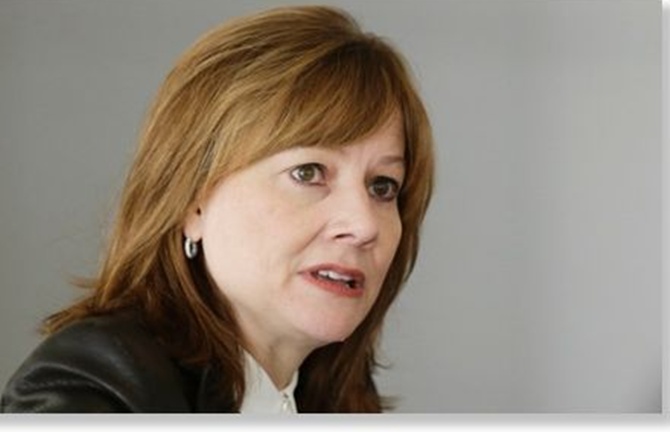 House Energy and Commerce Committee Chairman Fred Upton, a Republican, told Barra: "With a two-ton piece of high-velocity machinery, there is zero margin for error; product safety is a life or death issue. But sadly, vehicle safety has fallen short."

Barra calmly reiterated that the issue of defective ignition switches only came to her attention on January 31.

She had few answers for lawmakers wanting to know who made the decision to quietly revise the design of the faulty switch in 2006, and why GM did not take more seriously dozens of reports of keys unintentionally moving to the "off" position, sometimes at high speeds.

Barra said she will learn more from an internal probe led by Anton "Tony" Valukas, who chairs the law firm Jenner & Block. 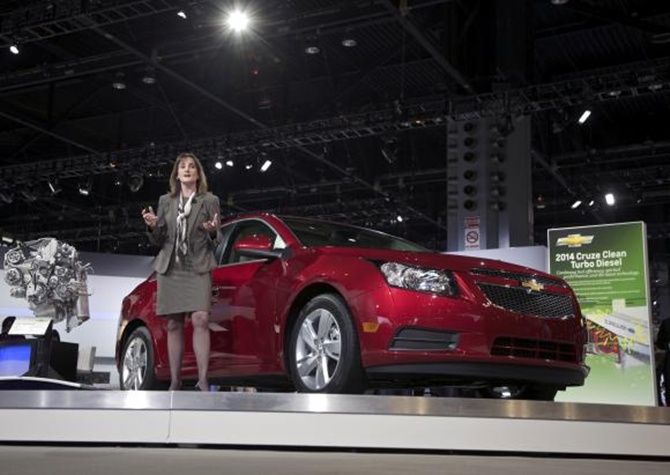 Under intense grilling by lawmakers, Barra said she found employee statements "disturbing" that cost considerations may have discouraged the prompt replacement of faulty ignition switches linked to recall of 2.6 million vehicles.

"I find that statement to be very disturbing. As we do this investigation and understand it in the context of the whole timeline - if that was the reason the decision was made, that is unacceptable. That is not the way we do business in today's GM."

On one of the most sensitive issues in the congressional investigation of GM, lawmakers asked Barra why the company would have included ignition switches in its cars even though they did not fully meet the company's specifications, as revealed in documents handed over to lawmakers this week.

"There is a difference between a part not meeting specifications and it being defective," Barra responded.

Pressed on whether the switch was acceptable from a safety and functionality perspective, Barra said: "As we clearly know today, it is not."