Sign in  |  Create a Rediffmail account
Rediff.com  » Business » Why did the economy go back to the 1991 position? 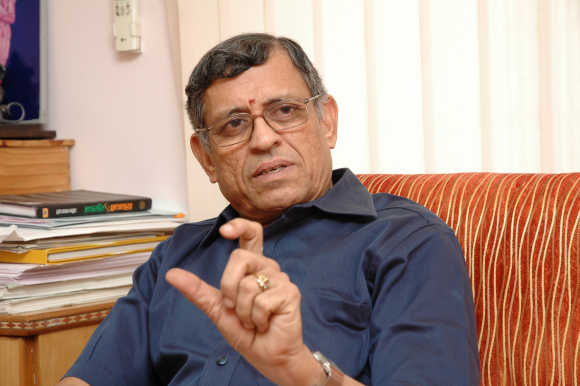 As the heat over foreign direct investment in retail rises, not only the opposition parties but people like Swaminathan Gurumurthy, Convenor of Swadeshi Jaagran Manch, are also fiercely against the government's proposal.

Shobha Warrier talks to the 'swadeshi' man on what his views are on FDI in retail and the politics behind it.

The prime minister has told the nation that the Indian economy is as bad as it was in 1991. How do you react to this statement from the same person who has brought in the change and has been in charge of the nation for so many years?

There are two aspects which have to be examined first. The prime minister has to answer first, why did the economy go back to the 1991 position? After having developed, and grown - India was seen as a rising global economic power from 2005-08 - how, in the last couple of years has the economy nosedived? He has to explain this to the people.

That the prime minister himself has to warn the country that it is as bad as 1991, means it's a serious situation. So, he is answerable to the country how he took the country back to the 1991 days.

In 1991, you could say the policies that were pursued were restrictive and that was why the country underperformed. Now, in the last 20 years, you have liberalised, you have brought in so many changes. Why is it under performing today?

What, according to you, are the reasons why the economy was under performing?

The amount of benefit was almost Rs 100,000 crores (Rs 1 trillion). The amount foregone by the government through concessions is over Rs 7 lakh crores (Rs 7 trillion). 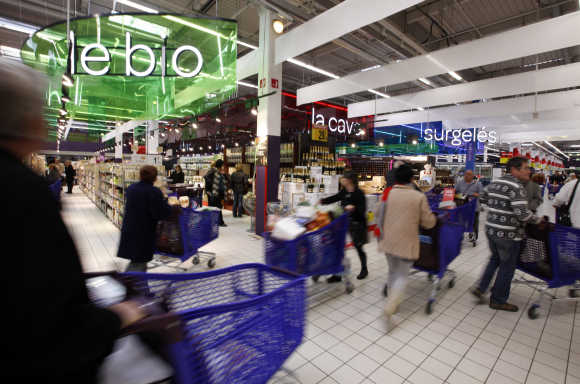 Now, the government has no courage to withdraw the benefits because the corporates put pressure on them. This country is being run by "pink" mindset and the pink newspapers.

Next is the way they have maladjusted the expenditure side. For example, the Rural Employment Guarantee Scheme is just to fetch votes; indirectly a bribery. It is a cesspool of corruption and is consuming Rs 100,000 crores (Rs 1 trillion). You are not only disfiguring the balance sheet of the country but also spoiling the work force of the rural areas.

For the last six-seven years, the game has been going on but no political party wants to talk about it because it will affect the vote bank. Who disfigured the balance sheet like this? This government. This has resulted in a huge budget deficit and that is one of the reasons why the rupee weakened. You also mismanaged the external front by liberalising your imports based on your stock market money.

You have no reason to run a trade deficit of $120 billion with China and starve the local industries. Because the external front weakened, the cost of the economy went up by at least 25 per cent. You brought in inflation. When inflation went up, savings went down, and when savings went down, there was a capital shortage and pressure on interest rates. It was all brought in by this government by its actions.

Like the prime minister says, is FDI in retail and other sectors the answer to solve all these problems? When the government says FDI in retail can create millions of jobs, a study says even if it were to take 20 per cent of the retail market, eight million jobs will be lost.

If Walmart is killing three jobs to create two jobs in the US, the proportion cannot be more in India. It will kill more jobs in India. The very day India announced that FDI in retail would have no impact on small retailers, Atlantic City, the web cousin of Foreign Affairs magazine, carried a headline news that 'Radiating death - Walmart spells doom for small business.'

They have said that the closure rate of small shops near Walmart is 35-60 per cent. For every mile from the Walmart super markets, the closure rate is 15-20 per cent. It radiates this closure. At the same time, you are claiming that there will be more employment opportunities and small business will not be affected. 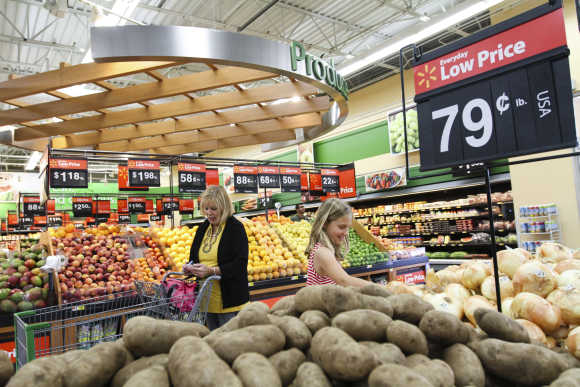 But it is not Walmart alone that is going to enter the Indian market...

You must look at what the biggest player will do. That there are other players also means, more competitors will be doing the same job. Whatever Walmart does, the other players have to do worse. Otherwise, they will not survive.

What is the difference between what the big Indian retailers have been doing and what the MNCs will do?

There is a difference. Their pockets are not as deep as the foreign players. For example, players like Walmart can establish their malls everywhere without looking at profits for the next, say five years or 10 years. They can undersell and finish off all the local retailers. I don't think the Indian corporates can have this kind of an approach.

Because they are not big enough?

They don't have the equity or capacity to pose this kind of danger. Another worry of mine, other than losing employment and destruction of small shops is the impact it will have on rural food security. Sixty per cent of the food grains produced in India is distributed within villages and only 40 per cent enters the commercial arena. Most farmers produce food for only themselves.

If this is so, how can you establish a farmgate to retailgate link? If you draw two per cent out of the 60 per cent, it is going to be disastrous.

What is the guarantee that they will outsource from Indian farmers, like the government expects? If they get cheaper food products from elsewhere, won't they bring them to Indian market, like you see Fiji and Californian apples even today in Indian market?

They can outsource 70 per cent of their products. Let us assume they pay a higher price here and lower price outside, they can make their margin. My worry is taking even five per cent food grains from the Indian rural market. If that is so, what will happen to the food security of those people?

Thirty-five crore small farmers and about 25 crore farm labour are dependant on what is produced in the rural market.

Supporters of FDI in retail talk about FDI in countries like China, Indonesia, etc., and say no economic crisis has happened there because of FDI in retail. What do you say on this? 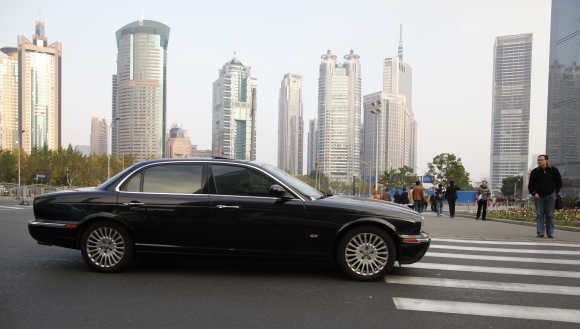 Image: A Jaguar car stops at a pedestrian crossing in the Pu Dong financial district of Shanghai.
Photographs: Aly Song/Reuters

China has limited the entire globalisation process only to coastal China. There is no free movement of people, there is no free exchange of information. It is juts impossible to follow China.

Another thing is, the number of retail shops in India is at least three times higher than that of China. Retail penetration is very high in this country. China destroyed traders and substituted them with ration shops for over 40 years.

Will FDI in retail create a buoyancy in the Indian economy like the government expects?

I don't think so. It can only manage the sentiments. The idea of managing the economy through managing the sentiments is only a short term measure. The prime minister says 50 per cent of the FDI will go into developing the infrastructure. Do you expect them to do so when they are here to do business?

Do you call bringing FDI in retail or any other sector, reform?

I don't think reform has never been defined. Today, anything that the western countries want is "reforms". If you oppose what they want, you are against reforms. The entire retail development in the US can be attributed to the destruction of society there by promoting crass consumerism. Retail investment is a product of consumerism.

FDI in retail, FDI in insurance, FDI in pension fund... which is going to be the most dangerous, according to you?

According to me, FDI in retail will immediately affect the economy. Making pension fund dependant on the stock market will be very dangerous. 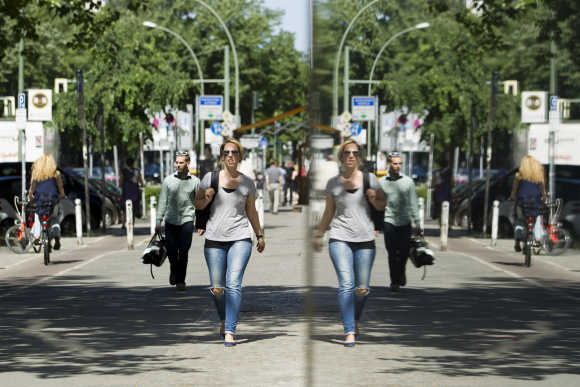 Image: People are reflected in a shop window as they walk in Potsdamer Street in Berlin.
Photographs: Thomas Peter/Reuters

Germans seem to be far more successful because Germany is the only country that is running surplus budgets. It has also surplus trade balance. And, we are basically a bank based country. Only two per cent of the savings gets into the stock market. That is why the government is able to meet its deficits.

And, the prime minister of this country said four years ago, if I recollect, don't go to banks, go to the stock market. But the country didn't listen. Our culture is aligned to the banking system.

The government says subsidies must go as it is eating the economy...

There is subsidy in every country. America is giving $20 billion annually as subsidy for agriculture, European Union also. Subsidies is the only way you can equalise.

The subsidies that are eating into the Indian economy is the petroleum subsidy. Seventy-five per cent of it can be attributed to the depreciation of the value of the rupee.