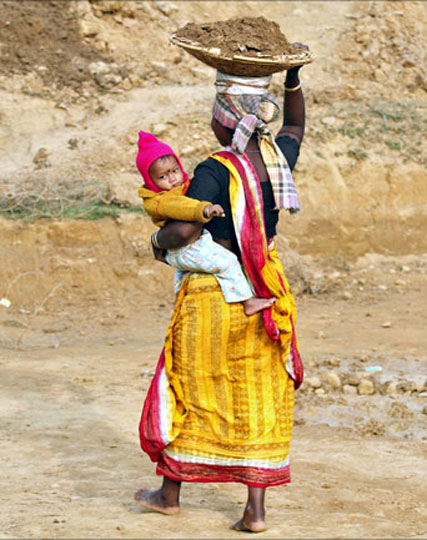 I do not think much will change even with a new government, says Mudit Jain, below, left, when asked about the future of the Indian economy. Executive director of the Rs 3,000 crore industrial chemical giant DCW, Jain is an MBA from the Wharton School of Economics, US.  He is also an avid reader and a keen watcher of politics.

Even while he juggled three different files on his table at his office in Nariman Point, Mumbai’s financial district, he spoke at length on the Indian economy with Rediff.com’s A Ganesh Nadar. An excerpt:

What are the challenges the new government will face? 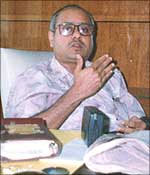 The challenges are too many, but the single most important challenge is creating employment. Unemployment is at an unimaginable, unmanageable high. That is the only challenge that they have to look into. If that is addressed, all other challenges can be managed.

What should be the new government's focus apart from employment - inflation, the rising dollar or infrastructure?

Employment means companies are recruiting, which means they are expanding, investing in infrastructure, employment creates an ecosystem where everything else falls into place. It is inclusive growth.

Policy paralysis marked this government, how long will it take to get things going again?

I don’t think much will change even with a new government. Our ways of working lack innovation and our thinking is bureaucratic. Policy paralysis will continue.

'India is not integrated into the global economy at all' 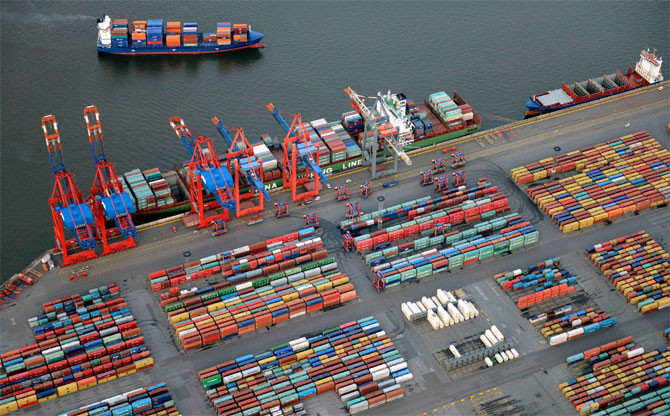 While even the US government gets into protective mode when its business and industry are affected, how come we are still preaching global integration, and opening up of our economy as the panacea for all evils?

They do that to deflect attention from the real issues. Manufacturing comprises about 20 per cent of our GDP. It has come down sharply from what it was. It is only the services industry -- our IT software exports --  that have kept our economy and our country alive.

Foreign countries are getting protective about the export of services, if they get more protective, we will be in a shambles.

We have seen that the economic liberalisation in 1991 has made India a glittering nation of brand names, but the famous trickledown effect has not happened. What is the remedy?

We are not integrated into the global economy at all. In fact the world is looking at India as a global market, as a big market. Where are we integrated? Are we competitive? Are any of our products, world class? Apart from IT-related services, our manufacturing sector is less than one per cent of the world’s industries.

Globally, our trade in goods and services is less than one per cent. Where is the integration? How many foreign companies are in India? What is the FDI? If you look at it relatively compared to a country like China, what are the trade surpluses of countries we do business with? All these factors tell us that we are not integrated into the world economy.

Foreign funds can flow into our markets with some restrictions but the convertibility of the rupee is not there.

Rather, what needs to be done is to remove the bottlenecks of taxes within the states and intra-state and allow the country to blossom rather than free imports into India. 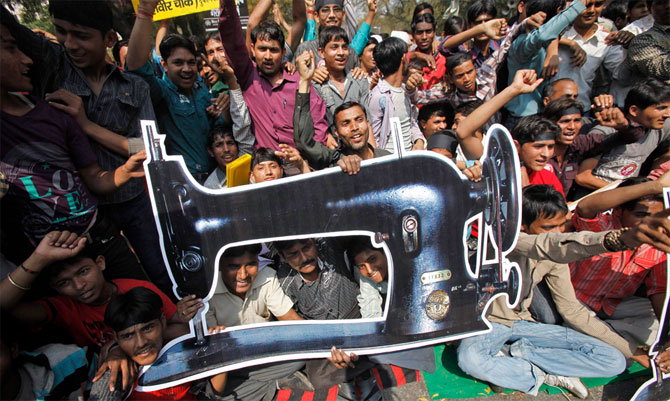 All our big industrial houses have gone into retail big time. What is the harm of letting global retailers into the same market?

There is no harm. The foreign retailers have deep pockets, they have better and cheaper products. The Indian retailers have an unequal playing field and that is why they are objecting.

Many Indian companies have gone into retail. I think, maybe they have made a mistake. That is my personal view.

Do you think the abolition of income tax and taxing bank transactions, as proposed by some, will help in any manner?

I don’t know. The major taxes in India are the indirect taxes. It is not income tax. Income tax is much smaller. Reduction in tax is always welcome. Abolishing Income tax and taxing bank transactions is still a tax. How will it help in improving the situation?

Is excise in some way restricting production where sales are not guaranteed?

Yes! Excise tax (an indirect tax charged on the sale of a particular good) affects cash flow. You have to pay excise before the goods leave the factory but depending on your product and demand you might get cash from your customer immediately or after 100 days.

So indirectly it affects production where sales returns are not immediate. The market is tight already and this is further aggravating cash flows. In my view it should be abolished. But the government gets a huge chunk of its revenue from excise, so obviously they will not do away with it.

'India's economy was never on track' 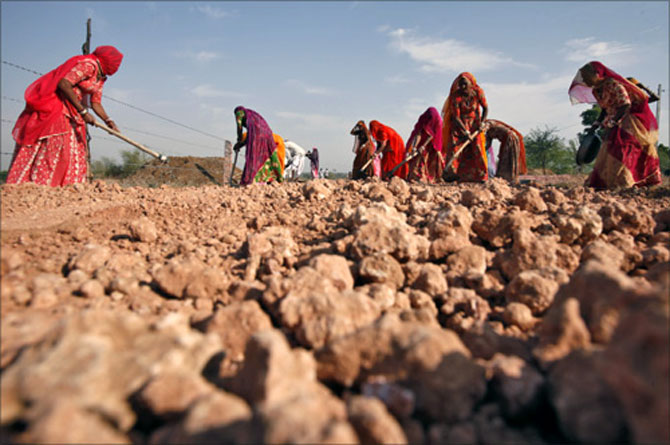 The skewed tax system makes India Inc opt for one state and avoid another. Should taxation be made uniform?

Of course! It should be uniform. You say India is integrated globally but we are not even integrated internally. Manufacturers in the liquor business say taxes and restrictions are so high that they cannot manufacture in one state and sell it in another. They say it’s like entering a fortress rather than another state in our own country.

We are operating like many separate countries. States feel that they don’t have enough resources as major taxes like excise and customs are both collected by the Centre. We should have a truly federal structure.

The economy is in crisis. If we have focused governance for two years, will we be back on track? Were we ever on track?

We were never on track. The media gives a rosier picture always. It will take a very long time to get back on track. There are too many structural issues. There has to be a constant process, the fruits of which will be manifested maybe five to 10 years from now, not two years.

'We have failed as a nation. We are not an economic powerhouse' 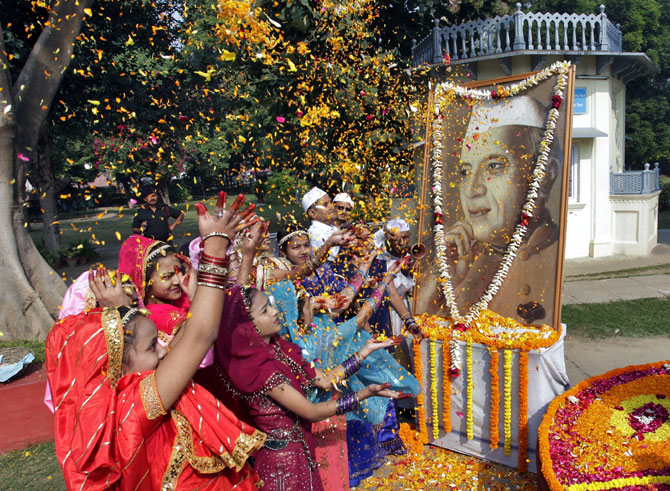 Moving from Nehruvian socialism to Narasimha Rao’s liberalisation, have we succeeded as a nation?

Nehruvian socialism was in a different environment and Narasimha Rao’s liberalisation was in a different situation, but we have failed as a nation. We are not an economic powerhouse in spite of having the tenth largest GDP in the World.

We talk about GDP but see the size of the country and the population. If we calculate per capita productivity it will be less than many countries in South East Asia. It is wrong to look at absolutes, one should look at relative parameters.

Nehru’s India had plenty of permits and licences. Narasimha Rao did not dismantle them at all. He just made imports easier. This was because of the terms and conditions that the World Bank imposed upon us in 1991.

'We are focused on managing bureaucrats rather than quality' 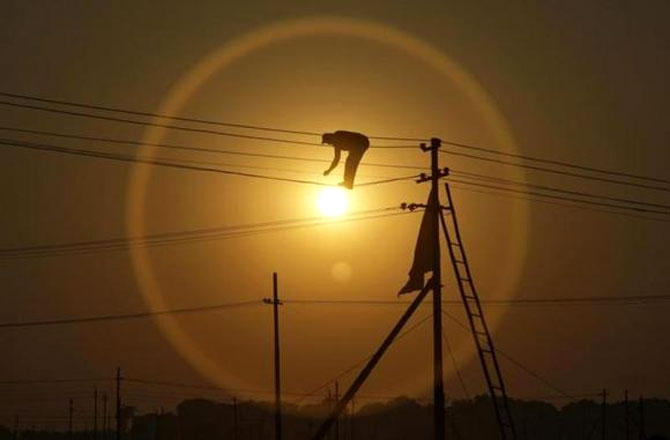 Power remains a major hindrance to industry, China gives its industry highly subsidised power, is that the answer to make our industry more competitive?

It is one of the factors but there are others too. We have very high interest rates, very high oil rates, infrastructure costs are high. It is cheaper to get chemicals from China to India than sending chemicals from South to North India.

As we have a huge domestic market our manufacturers really do not bother making world class products. How do we improve this situation?

We are busy dealing with excise, sales tax and tackling government officials. Getting approvals for projects are so cumbersome, where do we have the time to focus on the quality of goods? Costs are so high here. We are focused on managing bureaucrats rather than products’ quality.

Only if all controls are removed can we focus on and make good quality products. The entry level barriers are so high in this country that the entrepreneur forgets about quality.

The impediments to business should be removed. That is why Adi Godrej said, 'The regulator and the government should be different', only then will we have transparency.