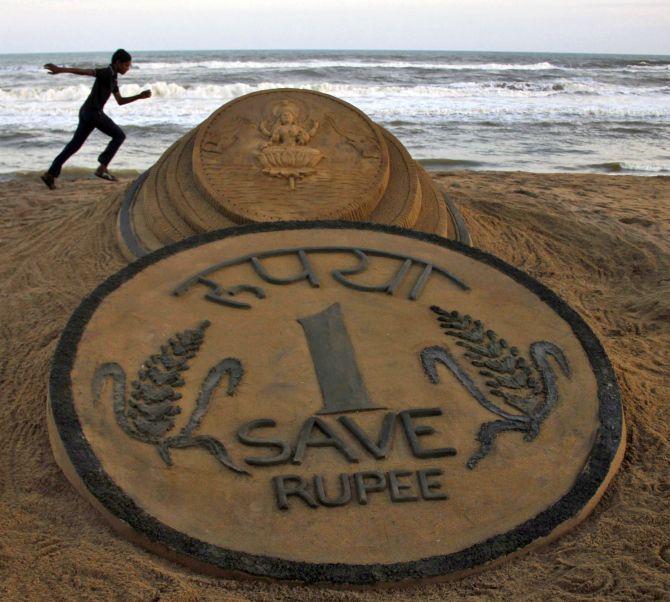 Economist Arvind Panagariya tells Suman Guha Mozumder that the rupee is doing a much-needed clean-up job, raising exports and cutting imports. And it must be allowed to do so.

Professor Arvind Panagariya, Jagdish Bhagwati Professor of Indian Political Economy, Columbia University, does not buy the argument that the rupee is sliding because the US economy is slowly staging a comeback.

The problem, he insists, is internal. He explains why, in an interview to Suman Guha Mozumder.

There are various theories, including external factors, as to why the rupee is falling. What is your take?

I do not buy this external fact theory. There is some element that is the US actually contracts money supply, and there is interest rates rise, and then some capital, which was previously invested in India, will try to move out of India in trying to have the higher returns in the US. 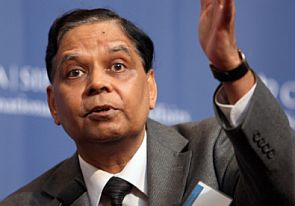 So, some of these dollar flows would actually cause the rupee to depreciate. That’s the argument.

But that’s not what it has done it as far as I can see… that has not been at the heart of the problem.

Mostly, I see this as internal.

There is first a longer-term issue, going back 10 years or so. The reforms were supposed to be happening, and at least growth-related reforms simply stopped for a long time.

'Stalled reforms will impact your competitiveness' 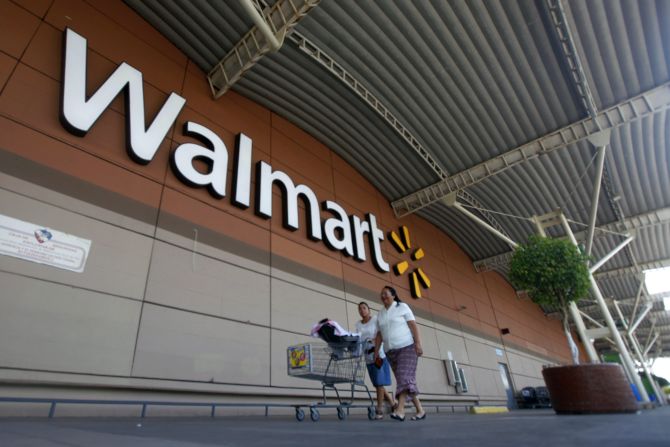 But these were all half-hearted measures. There were so many side conditions that in the end in retail, even Wal-Mart, which was the one that was knocking at the door the hardest, didn’t come.

The reforms having stalled… of course, is going to impact your competitiveness. In the end, your goods will eventually become less competitive.

But there had been a kind of long-term trend for a while, actually for many years, that in real terms, the rupee had been appreciating steadily.

In real terms, what it means is the exchange rate is not changing a whole lot.

India’s inflation rate is much higher than the American inflation rate. Then the value of rupee, internally, in terms of goods is declining, but externally it’s not declining.

In effect, the rupee, in real terms, is appreciating against the dollar. Its purchasing power abroad is rising. Some of it is natural when you grow richer.

But when too much of it happens too fast, your exports are going to be adversely affected, and your imports will become cheaper because your purchasing power in terms of the dollar is rising.

That opens up this widening gap in the current account. That, to quite a substantial degree, has happened.

That’s one way to look at this story. 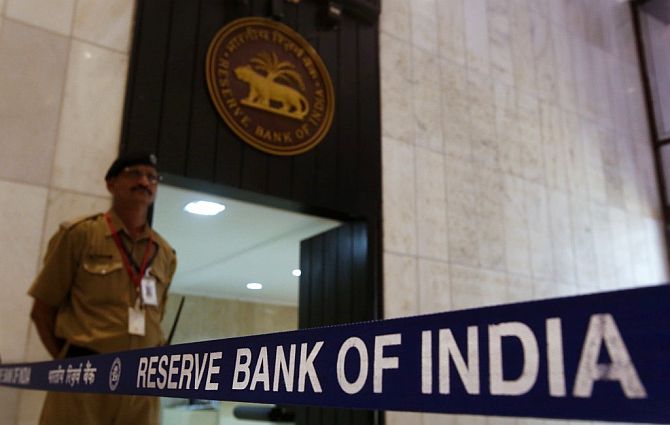 What’s the other way?

The other way to look at it is through the capital account.

In the end, if the Reserve Bank of India just sits back, neither buys dollars nor sells dollars, then any dollar that actually gets borrowed from outside, or dollars that NRIs put into the bank accounts, dollars that come from seizing foreign, or domestic investment -- whatever is the inflow of dollars to the capital account, investment dollars -- will get spent.

This is the problem that the central bank has to deal with, and we had this problem for 10 years because a lot of foreign investments came in.

What the RBI had been doing in those days was to basically buy the dollars. It would not let those dollars reach the hands of the companies, or individuals, or whoever. It would just intercept it on the way.

'Once RBI stopped buying dollars, all dollars that came in got spent' 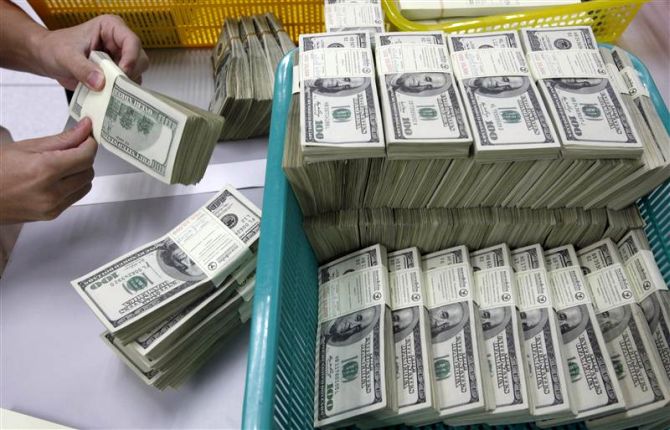 Imports did not rise as fast as they had to, or they would have, because the dollars got intercepted. That’s how the RBI built up these reserves and accumulated its reserves.

Starting in about 2009, the RBI gave up that policy. It left the dollars in the hands of the corporations, the people, and all.

That led to large imports, because ultimately there is this balance that whatever dollars are coming in through the capital account will get spent on foreign goods and services.

Once the central bank stopped buying dollars in the market, all dollars that came in got spent.

That is the other way to look at it; why this current account deficit actually widened.

I prefer to look at it this way, the second way.

On the one hand, it stopped buying dollars as they came in, and the second thing it did was to allow this massive external commercial borrowing.

The interest rates were so low abroad that companies went in and started borrowing in a big way.

'Maybe the Indian government looked the other way' 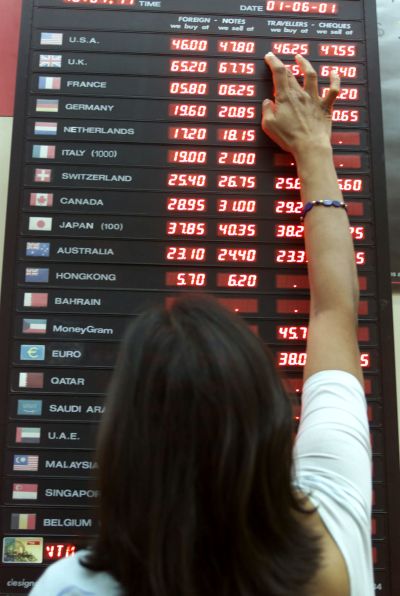 Didn’t the Indian government visualise the possible impact since 2009, when the RBI stopped intervening? Didn’t they see what the long-term impact was going to be, or did they just look the other way?

One possibility is that they did not understand the implication of what they were doing.

The second may simply be, yeah; maybe they looked the other way.

Maybe they thought it would look good because when these dollars come in, and we don’t buy the dollars, then the value of rupee rises.

The whole point of the previous purchases was that they did not let the rupee rise much… until about 2008.

Then, of course, 2008 late, the crisis happened, so things changed anyway.

Until just before the crisis, because the central bank bought the dollars, the value of the rupee did not rise as much. That meant that the goods remained a little more competitive.

Otherwise, in those days, if the central bank had not bought these dollars, the rupee could have probably gone to Rs 30 or so to a dollar.

That’s what would have happened. But they could keep it around 40, 41, somewhere around no more than 45 by purchasing these dollars.

Maybe the thinking was that ‘Oh, this is one way to keep the inflation low.’

It is also a way to look good, because the rupee looks strong.

Those are the possible reasons that they might have been thinking.

'It is the other past mistakes that are coming back' 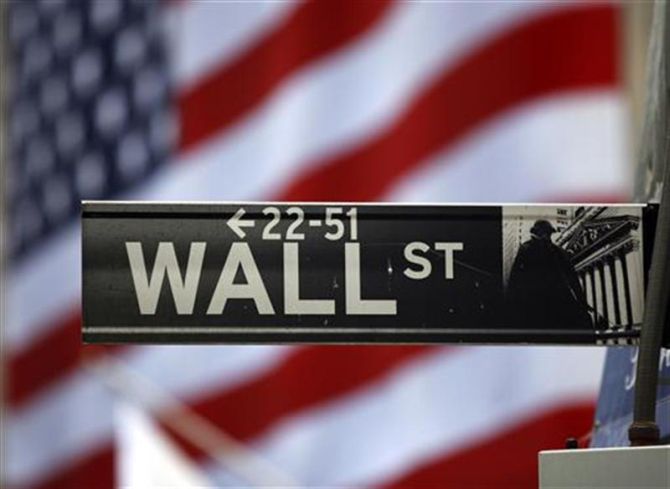 How tenable is the argument that because the US is prospering, India is suffering?

During the height of the economic boom during the Clinton era, the rupee was still not falling as it is falling now.

I don’t see a whole lot of connection there. It is the other past mistakes that are coming back.

The problem is that they have added to the past mistakes. They have compounded the problem.

When the rupee depreciated to 60 to a dollar, this was the time to sit back and not do too much.

When you say we’ve got to bring the rupee back to 50, you start taking these actions, which amount to reversing some of the liberalisation you have done.

The original mistake was not to liberalise too fast on this external commercial borrowing.

Now the solution they say is we are going to stop the outflows. That’s what they tried to do. Small steps in that direction, not big steps.

But the small steps give a very bad signal, because investors begin to get jittery that when push comes to shove, the Government of India will not even let us repatriate our profits.

The investment immediately begins to pull out. This compounded the problem.

In my opinion, they should have sat back quietly a bit. Lie low. 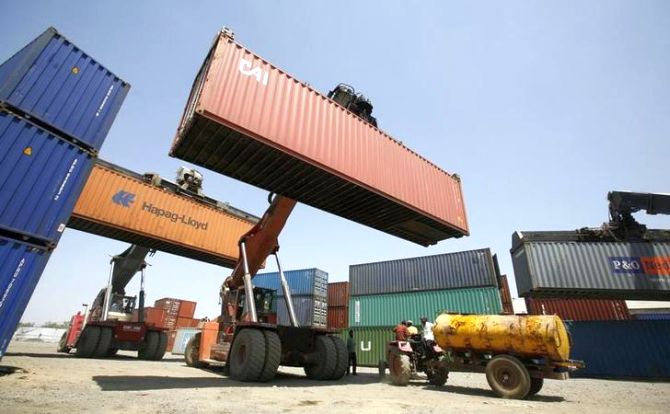 At 60 to a dollar, the chances are that your exports will begin to rise, and imports having become so much more expensive, will begin to fall.

Your current account will begin to improve automatically. That was the whole point.

The reason the rupee depreciated was precisely because the depreciation was required.

It also depreciated to give the signals to the investors to be careful. Don’t over-borrow outside.

The whole idea for the exchange rate depreciation was to give everybody signals to slow down on imports. Start exporting more.

There has been never a time and such a large depreciation does not lead to a very sharp expansion in exports, and contraction of imports.

They should have sat back, in my opinion.

Are we in for a big crisis?

I don’t think we are, if we handle things well. This whole thing is not going back to 1991 (when India faced its biggest forex crisis and launched reforms and initiated liberalisation).

I don’t think that’s going to happen. Even now we’ve got $275 billion plus in the reserves.

Only if the government really continues to give these bad signals by putting restrictions on outflow are you running a bit of a risk.

'The rupee is supposed to do the clean-up job' 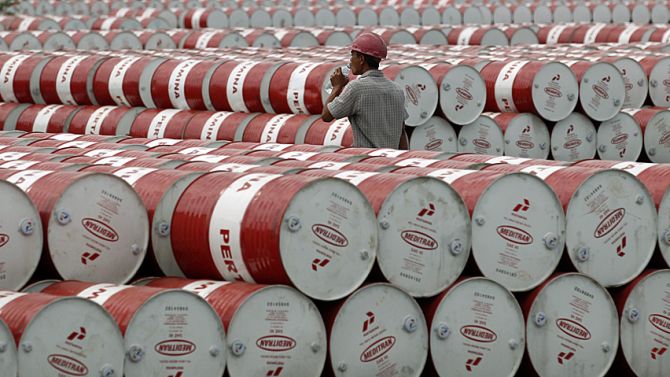 How can this CAD issue be resolved?

There is subsidy, particularly in diesel and petrol. It means that the price of both diesel and petrol is kept a lot lower than where it would be if there had been no subsidy. That, of course, means more imports.

If we gradually get rid of the subsidy, the price of petroleum and diesel would rise, and that’s going to help reduce imports.

On the current account, that is the main problem.

Also, the whole point is that ultimately, directly or indirectly, large fiscal deficit will lead to large current account deficit in the external account. There is no way around it.

I would not worry too much about bringing the rupee back to 50. Allow it to do the job it needs to do. Basically it’s supposed to do that clean-up job.

Raise exports, cut imports… You do that and start working on containing your domestic expenditure.

'The government has been irresponsible' 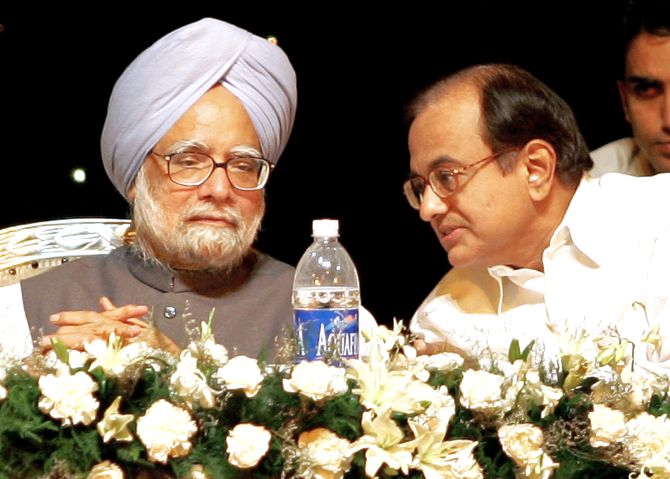 In a country like India where usually politics takes precedence over economics, do you think that’s going to happen?

No, no. The government has been irresponsible. After all, it is the ruling party which has to act responsibly. Because these populist (food security bill) schemes once put on the table, it will be passed.

Nobody can oppose that. Nobody has the guts to.

It is the responsibility of the government not to put irresponsible policies on the table.

This is why the (Atal Bihari) Vajpayee government acted much more responsibly.

Our government is being irresponsible.

In this political system, the government has to bite the bullet. They have to take the initiative, and not put these schemes mindlessly without doing the calculation.