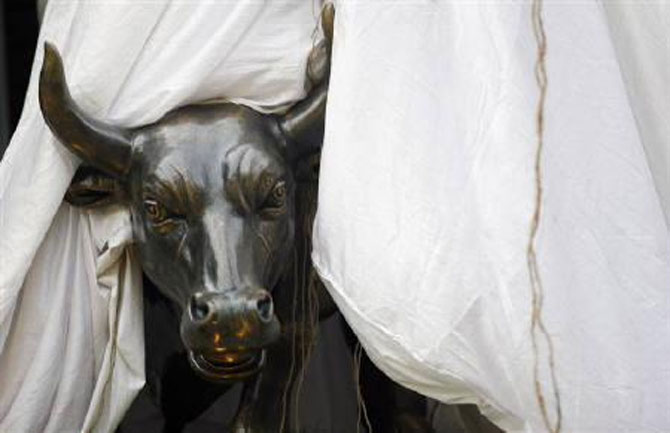 The improving macro economic data and a private survey which showed BJP-led government coming to power seems to have vindicated persistent buying by foreign institutional investors over the past fortnight to lift the stock markets to fresh all-time highs for the second straight session on Friday.

Both the benchmark indices posted their highest ever single day intra-day gains since November 18, 2103.

Foreign Institutional Investors have remained net buyers in equities for the past 15 straight trading sessions. Since February 12 they have bought Indian equities worth Rs 7,000 crore ($1.1 billion).

On Thursday, they were net buyers to the tune of Rs 1,273 crore, their largest single day purchase since December 19, provisional data showed.

The rupee was trading higher at Rs 61.07 to the US dollar compared to its previous close of Rs 61.11.

Sharp gains in equities for the second straight session boosted sentiment for the Indian currency.

Asian markets were mixed with Shanghai Composite and Hang Seng shares down while Straits Times was trading with marginal gains up 0.2%.

Japan's benchmark Nikkei ended at a new five-week high on Friday helped by a weakening yen and the European Central Bank's decision to keep its rates unchanged.

For the week, the benchmark share index was up 2.9%. Hang Seng and Shanghai Composite were down 0.1-0.2% each.

BSE Realty was the top sectoral gainer on the BSE up 5.5% followed by Bankex, Capital Goods, Oil and Gas indices. However, IT and Healthcare indices were down over 2% each.

Index heavyweight Reliance Industries ended up nearly 6% at 869 on the back of heavy volumes.

RIL, which holds third highest weight in the Sensex after ITC and Infosys, has contributed nearly one-third of over 300 points rally in the S&P BSE Sensex today.

The improving macro-economic data boosted sentiment for banks which are a proxy to the economy.

Bharti Airtel surged 5.5% to end at Rs 301 after Standard & Poor's (S&P) Ratings Services said that it had raised its long-term corporate credit rating on telecommunication services provider to 'BBB-' from 'BB+'.

Other gainers include, ONGC, HDFC, M&M and Maruti.

However, IT and Pharma shares ended lower on the back of an appreciating rupee against the US dollar.

The Indian rupee soared to the highest level in almost three months against US dollar.

A rise in rupee adversely affects export oriented companies, who earn their revenues in dollars.

Pharma shares which had posted robust results in December quarter on the back of healthy earnings from exports to the US also ended lower. Sun Pharma, Dr Reddys Labs and Cipla ended down 1.4-3.6% each.

Among other shares, Shares of Prism Cement ended over 6% higher after the company said that it has started production of coal at the Prism Coal Mine in Chhindwara, Madhya Pradesh.

The Company has been granted all statutory clearances for the operation of the Coal Mine.

The BSE Mid-cap and Small-cap indices ended down 0.2% each.