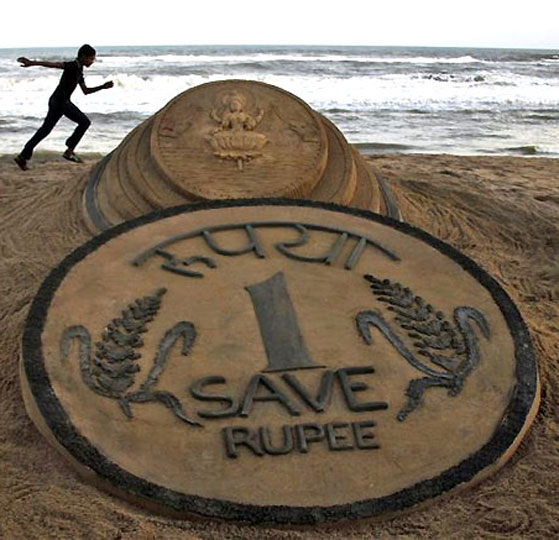 The rupee weakened on Thursday amid a global rout after the U.S. Federal Reserve decided to further prune its asset purchase programme which will potentially lead to foreign fund withdrawals from emerging markets including India.

The unit however staged a recovery after banks sold dollars to book profits at higher levels. Some dealers also cited state-run banks selling the greenback on behalf of the central bank, though the view was not universal like in recent sessions.

The Federal Reserve on Wednesday trimmed its bond purchases by another $10 billion as it stuck to a plan to wind down its extraordinary economic stimulus despite the recent turmoil in emerging markets.

Foreign funds have sold $1 billion in Indian debt in the five sessions to Tuesday, reducing their net purchases this year to $2.1 billion. Investment in equities stands at a paltry $154 million compared with over $20 billion inflows seen in 2013.

"I don't think we will see a very huge impact of the Fed stimulus wind down on the rupee. The country is better prepared this time around to face any such eventuality," said Ashtosh Raina, head of foreign exchange trading at HDFC Bank.

The central bank and the government have taken several steps including attracting $34 billion through offshore fund raising and non-resident Indian deposit schemes.

The country's current account deficit too is thus expected to come in at much lower levels than the projected 4.8 percent of gross domestic product, helping insulate the rupee in a way.

Traders broadly expect the rupee to stay in a 61.50 to 63.50 range over the next three months.

Some flows towards State Bank of India's share sale also helped the rupee, traders said. The share sale managed to raise about $1.2 billion, as against a target of $1.5 billion, sources told Reuters on Wednesday.

Weakness in domestic shares however continued to be a dent, limiting further gains in the rupee.

Shares fell for a fifth consecutive session to their lowest in 10 weeks as blue chips including banks slumped on the back of the Fed move.

In the offshore non-deliverable forwards, the one-month contract was at 63.35, while the three-month was at 64.25.