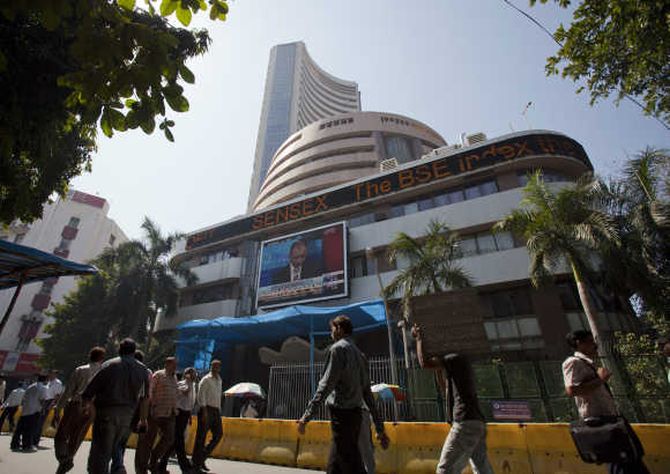 Foreign institutional investors have been aggressive buyers in Indian equities during the month so far after they bought equities worth Rs 9,543 crore.

Meanwhile, global investment bank Goldman Sachs upgraded Indian shares to "overweight" from "marketweight" and raised its target on Nifty to 7,600, citing reduced external vulnerabilities, including a narrowing current account deficit, and potential for gains ahead of elections that conclude in May.

The Indian rupee was trading marginally higher at Rs 61.16 against Friday's close of Rs 61.19 on demand for the dollar from oil refiners. Domestic shares also gave up gains on profit-taking after hitting new life highs earlier in the session.

Traders will continue to monitor shares and debt for cues on foreign fund flows during the session.

Asian shares ended firm as concerns over the situation in Crimea seems to have eased for now. Japan's Nikkei rebounded from its recent lows to end up 0.9%. Shanghai Composite ended up 0.1%, Hang Seng gained 0.5% while Straits Times rebounded from the day's lows to end flat with positive bias.

European shares continued to trade weak as traders adopted a wait-and-watch stanced over the ongoing situation in Ukraine. All the major stock indices in the region such as CAC, DAX and FTSE were all down 0.3-0.4% each.

The BSE Power, FMCG, Oil and Gas, Bankex, Metal indices were among the top gainers while IT, Realty, Capital Goods were the top losers. Bankex also firmed up in late trades.

Index heavyweights contributed the most to the gains on the Sensex. ITC was up nearly 2.6% and Reliance Industries gained 1%.

Maruti Suzuki ended nearly 8% up after the company decided to seek the approval of minority shareholders for the company’s Gujarat project.

SBI ended nearly 3% up after the state-owned bank recently said its plans to sell non-performing assets worth Rs 5,000 crore to asset reconstruction companies.

HDFC Bank and ICICI Bank which had gained in early deals were now trading 0.4-1% lower. HDFC was down 1.6%.

Shares of IT majors Infosys and TCS ended down 0.9-1.1% each on the back of an appreciating rupee as they earn most of their revenues from exports to the US.

Among other shares, AstraZeneca Pharma India ended higher by 2.8% to Rs 1,192, extending its Friday’s 9% rally, after its board approved the delisting proposal received from the Sweden based parent AstraZeneca Pharmaceuticals AB.

Amtek India has rallied 20% to end at Rs 77.50 after the company said it has completed the acquisition of German auto component firm Kuepper for an undisclosed amount.

In the broader marketr, BSE Mid-cap and Small-cap indices ended up nearly 1% each.