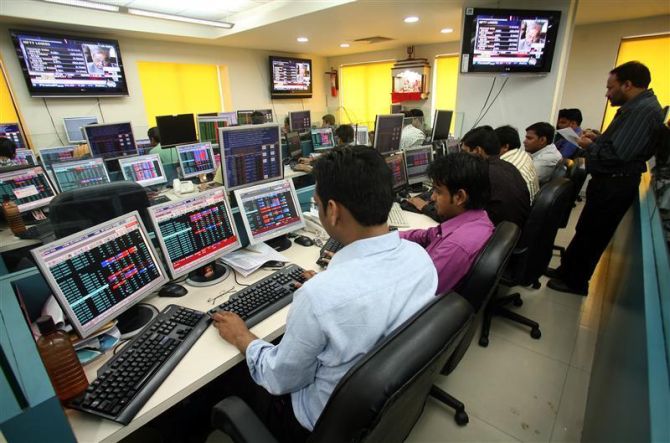 Markets came off their day's highs to end flat amid a range bound trading session on Wednesday as investors turned cautious ahead of industrial production for January and consumer price inflation data for February to be released later today. Weakness in the global market also dampened sentiment.

The Indian rupee was trading lower at Rs 61.21 compared to previous close of 60.94 because of demand for the greenback from public sector banks.Traders say state-run banks were spotted buying dollars likely on behalf of the government for defence-related payments.

Asian markets ended lower today after drop in prices of industrial metals such as copper and iron in China and weak February exports raised fears that the world's second largest economy is still in the midst of a slowdown.

Nikkei ended down 2.6%, Straits Times slipped 1%, Hong Kong's Hang Seng ended down 1.7% and Shanghai Composite ended 0.2% lower. In Europe, the FTSE, CAC and DAX were down over 1% each.

ITC which had witnessed profit taking recently ended up 2.1% contributing the most to the gains on the Sensex while Hindustan Unilever ended down 0.3%.

Sun Pharma rebounded today gaining 4.1% and end as the top Sensex gainer. The stock had corrected nearly 7% in past four trading sessions on reports that the company has recalled 2,528 bottles of its generic version of diabetes drug Glumetza.

Dr Reddy's Labs ended up 0.5%. Motilal Oswal expects FY16 to be stronger as new launches accelerate. The brokerage has a buy rating on the stock with a target price of Rs 3,180. Cipla was up 0.5%.

The weakening rupee led to buying in select IT exporters with TCS and Wipro gaining over 1% each.

Other Sensex gainers include, ICICI Bank, Hero MotoCorp and HDFC among others.

Among other shares, Shares of Just Dial ended down 0.2% while L&T Finance Holdings ended up 5.6% higher.

The National Stock Exchange decided to include them in the futures and options (F&O) segment from Thursday.

HCL Infosystems ended down 0.4% amid profit taking after 27% gains in past one week. Recently, Shiv Nadar family-run firm Vama Sundari Investments (Delhi) has increase its stake in the company via open market.

Petron Engineering Construction ended higher by 7% at Rs 138, extending its Tuesday’s 20% rally, after the company said it has received Letter of award for civil contract from UltraTech Cement for a total contract value of Rs 54.70 crore.

Vardhman Textiles ended higher by 4% at Rs 343 after Baring India has bought an additional over 1% stake in the company for total consideration of Rs 25 crore via open market.

In the broader market, the BSE Mid-cap ended up 0.1% and Small-cap index ended nearly unchanged.

Market breadth ended negative with 1437 losers and 1318 gainers on the BSE.