Markets end in the red after volatile session 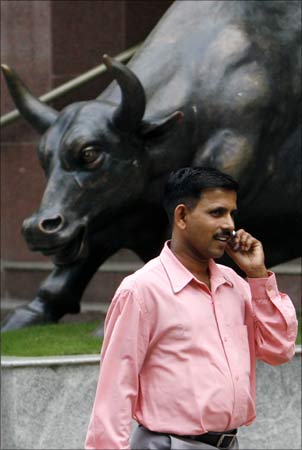 The Nifty closed above the crucial 6,050 mark despite slipping below it in intra-day trades.

Foreign institutional investors were net sellers in equities to the tune of nearly Rs 3,886 crore in the previous six out of seven trading sessions till Friday.

The rupee has slightly depreciated to Rs 62.35 versus the dollar, compared with its previous close of Rs 62.29, as currency dealers believe dollar demand from oil marketing companies may emerge. Dealers believe that demand for dollars may also increase due to impending defense related purchases.

The BSE midcap and smallcap indices continued to outperform the Sensex, and were up 0.05% and 0.18% respectively.

The market breadth remained positive on the BSE, with 1,328 stocks advancing, 1,249 stocks declining, and 149 remaining unchanged on the counter.

Across the various sectors, Consumer Durables and Realty were the bigest winner, up 1.15-1.55% each, while Capital Goods, Auto, and Healthcare were also in the green, gaining less than 1% each. Bankex, Metal, and IT were the major losers, declining by 0.4-0.60%.

Gains of in Reliance Industries & L&T were pared by more than 2% declines in TCS, HDFC, Bharti Airtel and FMCG major Hindustan Unilever.

Tata Motors closed marginally higher by almost 1% on expectations of a strong Q3 performance. After market close, Tata Motors announced a 195% increase in third-quarter net profit which was boosted by strong demand for its luxury Jaguar Land Rover vehicles. Consolidated net profit for the October-December quarter was 48.05 billion rupees, compared to 16.3 billion rupees a year ago.

Bharti Airtel was down by 2.57%  to close at 307.40 on concerns of rising spectrum acquisition costs after the ongoing auction. HDFC Bank, Mahindra & Mahindra, Tata Steel, NTPC and Axis Bank, each declining by 0.3-1.5%, were the other notable losers.

DLF was up by almost 3% on the NSE, after the realty major announced the sale of its luxury hospitality chain Aman resorts to its original founder Adrian Zecha for $358 million (about Rs 2,200 crore). After market close, the company also announced that it has received a refund of Rs 675.81 crore from DDA following the scrapping of a project to develop an international convention centre in the national capital.

United Bank of India dipped 6.29% to Rs 26.80 after reporting a net loss of Rs 1,238 crore for the third quarter ended December 31, 2013 (Q3), due to higher provisioning for bad loans. The state-owned lender had profit of Rs 42 crore in a year ago quarter. The bank put aside Rs 1,858 crore in the December quarter towards non-performing assets (NPA), which is over four times of Rs 450 crore it provided for bad loans in the same period a year ago.

Avanti Feeds was locked in its 20% upper-circuit at Rs 343, its record high on BSE, after reporting a nearly five-fold jump in net profit at Rs 22.44 crore for the third quarter ended December 31, 2013 (Q3) on back of strong operational income. The company had profit of Rs 4.73 crore in a year ago quarter.

SKS Microfinance rallied over 11.75% on back of heavy volumes on the bourses. SKS Microfinance is planning to raise up to Rs 4,500 crore to meet its lending requirements during the next financial year, including Rs 400 crore though diluting maximum 20% stake though the qualified institutional placement (QIP) route.

Piramal Glass was locked in upper circuit of 20% at Rs 92.80 on BSE after its board approved voluntary delisting of equity shares of the company from the stock exchanges. Promoters of Piramal group plan to delist Piramal Glass from the BSE and NSE and buy the shares held by the public at Rs. 100 each.