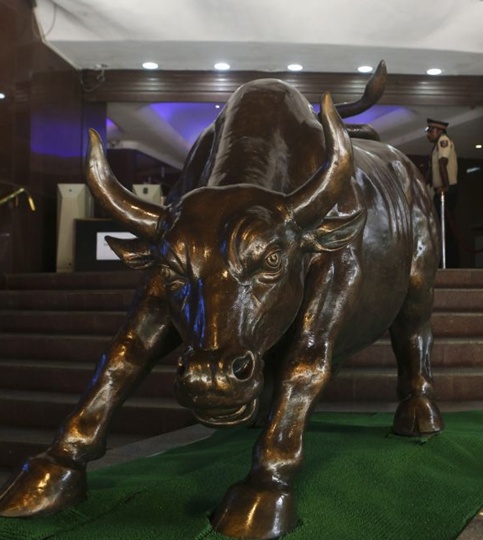 Markets, today morning, made higher opening as IT bellwether Infosys appointed former SAP executive Vishal Sikka as the CEO and MD of the company. Sikka will take over from August 1, 2014.

Volatility was observed throughout the day as key benchmark indices alternately swung between positive and negative zone.

Moreover, reports on monsoon rains were 48% below average levels in the week to June 11, data from the weather office showed on Thursday, reflecting the late onset of the annual rains over the southern Kerala coast.

On the other hand, the broader markets also edged up as - BSE Mid cap index was up 0.52% and Small cap indices surged to 0.36%.

The market breath at the BSE was positive with 1746 advances and 1356 declines.

As per provisional data from the stock exchanges, foreign portfolio investors (FPIs) sold shares worth a net Rs 313.40 crore on Wednesday, 11 June 2014.

The Indian rupee is trading at 59.31/32 versus its close of 59.27/28 in the absence of any fresh domestic triggers with traders watching the domestic stock market for cues on foreign fund flows. Traders expect the pair to trade in a range of 59.20 to 59.45 for the day.

Asian shares slipped on Thursday after a retreat on Wall Street and escalating violence in Iraq delivered a one-two punch to risk appetite, which in turn kept oil prices near three-month highs.

European shares held steady near 6-1/2-month highs on Thursday, with gains limited by concerns over the pace of global growth, while oil prices hit a three-month peak on escalating violence in Iraq.

Fighting in Iraq also prompted concerns about the oil supply outlook, lifting US crude futures 0.8% to $105.19 a barrel, their highest since early March.

Back home, BSE Healthcare Index was the top gainer among the sectoral indices, up 1.39 % followed by FMCG, Auto, Realty, Power and the information technology (IT) indices.

The top Sensex gainer, Hindalco, moved up 3.78% followed by Sun Pharma, HDFC Bank HDFC that gained over 2%, while the top loser was Bharti Airtel - down more than 3% followed by Coal India, Axis Bank, BHEL, Sesa Sterlite.

Infosys declined by 0.38% in volatile trade after the company selected after the board has appointed former SAP executive Vishal Sikka as the Chief Executive Officer and Managing Director (CEO & MD) of the company. Sikka will take over from August 1, 2014.

Shares of Bharti Airtel slumped by 3.57% after Credit Suisse downgrades the stock to "underperform" from "neutral" and reduces the target price to 265 rupees from 275 rupees, citing competition from rival Rel Jio's, a unit of Reliance Industries.

Among other shares, Edelweiss Financial Services was locked in upper circuit of 10% at Rs 59.95 on BSE after a multiple block deals executed in the counter on BSE and NSE.

KEC International moved higher by 0.81% to Rs 124 after the company announced winning new orders of Rs 1,209 crore in its transmission and distribution and cable businesses.

Rolltainers was up 3% to Rs 340 on BSE, extending its two week long rally, after the company said it is evaluating various investment options.

The stock is currently trading at its lifetime high has been more than doubled in past two weeks from Rs 150 on May 27, compared to less than 4% rise in benchmark S&P BSE Sensex.

KPR Mill moved higher by 6% to Rs 219, extending its past two days 11% rally, after textiles firm said it initiated expansion plans in its garment business in order to meet increased demand in garment exports.