“They say Dholera will become a world class city. They say the land here will turn into gold,” says Pradyumnasinh Chudasama, a farmer in Bavaliyari village in Gujarat.

“But, if locals do not stand to benefit from this ‘development’, what do we do?”

Chudasama voices his widely shared concerns about the Gujarat government’s ambitious plan to create an industrial hub in the area spanning 22 villages that are to become a proposed special investment region (SIR) at Dholera.

Gujarat was a pioneer in the country in coming up with the SIR Act in 2009, and subsequently notifying certain zones like Santalpur (near Patan), Dahej (Bharuch) and  Mandal-Becharaji (Ahmedabad) as SIRs. Dholera is the most ambitious of them all.

Success or failure for this pet project of the Gujarat government, led till recently by Narendra Modi, will be widely felt. 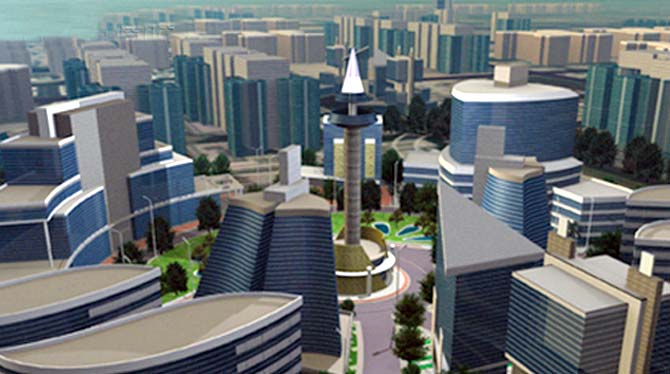 The idea of SIRs came about to take advantage of the proposed dedicated freight corridor between Delhi and Mumbai, 38 per cent of which falls in Gujarat.

Nearly a third of the proposed investment of $90 billion in the Delhi-Mumbai Industrial Corridor will happen in Gujarat. An SIR is different from a special economic zone: it is bigger and exports aren't its only focus.

It comprises areas clearly demarcated for industry, agriculture, residential and entertainment zones, as well as educational institutions et cetera, depending on its size.

However, when the industry-friendly government of Gujarat notified these SIRs, the locals did not seem very …

“There is practically no forced land acquisition,” claims a senior officer in the state government who is working on these projects.

Last August, the government appeared to have conceded to these demands by pruning the size of the Mandal-Becharaji SIR. It decided to de-notify 36 out of the total 44 villages that were part of the original plan, reducing the SIR from 50,000 hectares to 10,172 hectares covering just eight villages.

A senior bureaucrat in the state government who has been closely associated with several land acquisition projects in the state says that there was an element of canny realpolitik in it.

“A majority of the villages that were protesting the proposed SIR were in the Surendranagar district which is the Congress’s stronghold. In one stroke of the pen, the state government has taken the steam off the movement, ensuring a smooth execution of the project. Additional land if required as the zone develops can always be bought in smaller parcels later.”

Farmers’ representatives see it differently. Chudasama says: “We are not opposed to industry, but we do not want to part with our land under the SIR scheme. We would like to sell land directly to industry on our own terms. Whoever wishes to sell can negotiate with buyers, while those who plan to continue with agriculture would be free to do so. Perhaps the government too has realised this reality.”

A senior officer in the state bureaucracy who was involved in SIRs broadly agrees.

“It is difficult to predict the fate of SIRs in the state; a lot will depend on political will. I personally don’t think the project will fizzle out, but there could indeed be some slowdown in the process. And that wouldn't harm things much as SIRs are conceived as long-term projects over a horizon of 20-30 years."

Political watchers feel that SIRs do have a future but things need to be reworked a little, taking into account the micro perspective.

Y K Alagh, economist and former Union minister for planning, programme implementation, statistics and power, says Gujarat’s farmers are not against industrialisation, but the blueprint of SIRs needs a proper land use plan.

“Micro-level planning is needed when laying roads and other infrastructure. Simply drawing a line across the map does not help,” Alagh says.

Alagh estimates that while earlier the demand for non-agricultural land would grow at 2 to 5 per cent in a decade, “now that is happening in a matter of a couple of years.”

The government’s argument is that while the villagers stand to lose a portion of their land to make way for infrastructure, the price of the remaining parcels of land they own will go up several times. One officer insists Dholera has already seen this escalation in land prices. The average price of land in Dholera was around  Rs 50,000 an acre around five years ago.

He says, prices have shot up ten-fold to Rs 5 lakh an acre in some areas now. “With the infrastructure coming up, the price would go up further,” the officer adds. Ironically, it is the government that has been struggling to sell land in Dholera. The Dholera SIR Development Authority has been given over 2,300 hectares by the revenue department, which was government wasteland.

They all missed the deadline to make the down payment on the offered land, so the authority had to cancel their allotments.

Insiders say these companies have decided against investing in Dholera for the moment because the area is a low-lying zone close to the sea level and is prone to flooding. This means there would be substantial costs to raise the land  through ground-filling.

While the authority is not prepared to share exactly how much it plans to invest this year, an officer says the overall infrastructure project planned is worth around Rs 60,000 crore, but it would be spent in tranches.

It is in talks with Cadila Healthcare (Zydus) and the Torrent group to see if they will take up land in Dholera.

Gujarat Energy Minister Saurabh Patel says: “SIR does not mean that it is for investment purposes only. We identify a region that has potential, and over time, do a holistic plan to develop the region. There are a lot of misconceptions amongst farmers, but those will be allayed.”

Farmers in the region, however, are eagerly waiting for the Narmada water to reach their fields so that they can redouble their efforts on farming.

Will Prime Minister Modi choose to focus on developing similar investment regions across the country?

It will likely depend on whether or not Dholera proves to be a showpiece of the controversial Gujarat model after all.