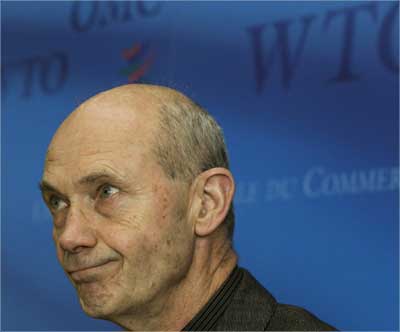 The Doha trade negotiations are on the verge of collapse due to unrealistic demands by leading industrialised countries that want China, India, and Brazil to "harmonise" a large percentage of their industrial tariffs well below current applied rates, sources said.

The G-90 includes countries from Africa, Pacific and Caribbean as well as least-developed countries.

Lamy said his meetings with the US, China, India, and Brazil over the last fortnight revealed that the gaps in positions among members are too wide and not amenable for any closure at this juncture, an African trade envoy told PTI. 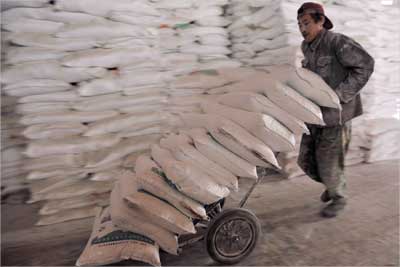 As part of the sectoral negotiations, the US wants China, India, and Brazil to reduce their tariffs on chemicals, industrial engineering goods, and electricals and electronics close to zero.

Washington justified its demand on the ground that the three "emerging" countries are the major beneficiaries in the global trading system.

Though the Doha mandate calls for "voluntary" participation in the sectoral negotiations, the US has turned the tables by saying that unless the three developing nations agree to its demand for reducing tariffs close to zero through a basket approach it would not move, sources said.

The three developing countries flatly rejected the US demand on sectorals saying they would only participate on a voluntary basis to conclude the Doha agreement, said trade officials from these three countries. 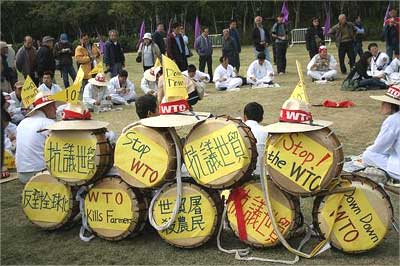 Image: Protestors at a WTO meet.

Consequently, Lamy has now given up his plan to issue the "draft final texts".

Instead, he would circulate "documents" from the chairs for the Doha negotiating bodies on April 21.

In a fax sent to members on Monday, he said, "These documents will be accompanied by an introductory report by the TNC chair in which I will, inter alia, report on the consultations I am conducting currently."

The sudden volte-face took place on Friday last following a meeting between the director general, who is also the chair for the Doha trade negotiations committee, and the respective negotiating chairs, sources said.

"The Doha Round is dead," a South American trade envoy told PTI, arguing that "it is time for members to acknowledge this and make appropriate corrections." 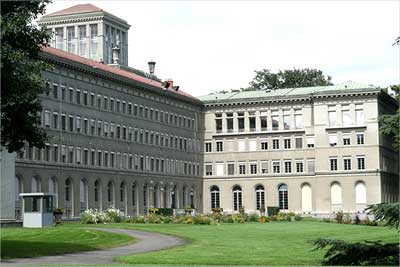 Given the differences in Doha industrial goods, particularly sectorals, it is clear from the day one that it would be difficult to prepare a text.

"We are somewhat surprised by Lamy's admission that gaps on sectorals are unbridgeable, as we had repeatedly told him several months ago," said another trade envoy.

In the absence of a plan to issue texts before Easter, it is clear that members will now have to prepare for a "soft-landing," said one trade envoy in Doha.

He implied that members will continue to work without any deadline until there is some convergence.

Another trade envoy said, "The window of opportunity to conclude the Doha trade negotiations in 2011 is now almost impossible.

Since 2008, differences in the three Doha market access areas of agriculture, industrial goods and services have significantly widened.