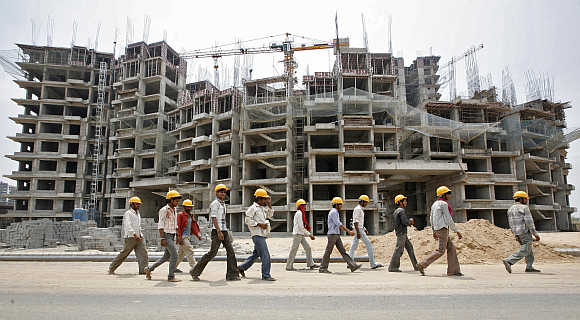 Image: Workers in front of a construction site of a commercial complex on the outskirts of Ahmedabad.
Photographs: Amit Dave/Reuters Business Standard

Banks that have a portfolio concentration in relatively sluggish real estate markets are likely to see their asset quality suffer the most.

For several years, housing finance was viewed by banks as one of the safest avenues for lending.

Banks that had got into the act early on, in competition with the specialised housing finance companies that started the business, were handsomely rewarded with a very positive risk-reward profile.

Those that lagged were left to rue their indecisiveness.

As the sector expanded, though, many of these banks saw opportunities to enter.

But, as was reported in this newspaper on Monday, things may be changing; lending for housing may not be such an attractive proposition any more.

Six public sector banks have been identified as having a particularly problematic housing loan portfolio. 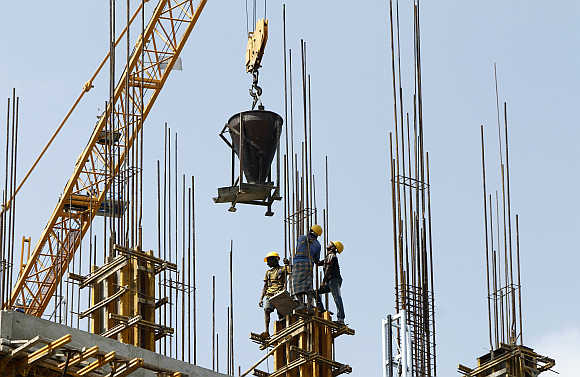 Image: Labourers work at the construction site of a commercial complex in Chennai.
Photographs: Babu/Reuters

Is this the result of some bad judgements and shoddy processes confined to a few banks? Or is it the tip of the iceberg, reflecting some fundamental problems with the entire system’s exposure to this sector?

It is perhaps a bit of both.

Banks are clearly different in terms of their geographic presence and their project appraisal and risk management capabilities.

In particular, banks that have a portfolio concentration in relatively sluggish real estate markets are likely to see their asset quality suffer the most.

But, beyond this, the assessment of risks across different projects, based on location, price segment, developer track record and other significant parameters, is critical in this business.

Banks chasing lending targets are presumably tempted to drop their guard a bit in what has always been seen as a safe bet. 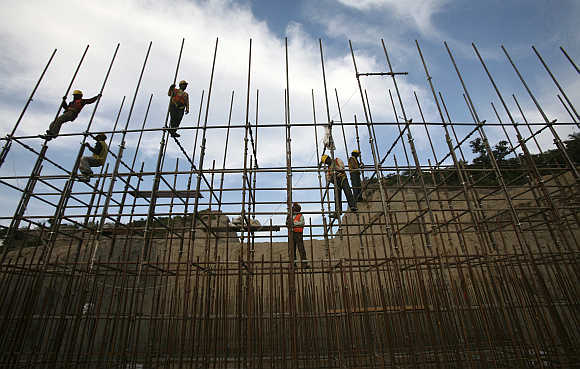 Even with the limits on loan-to-value ratios and additional provisioning requirements imposed by the Reserve Bank of India, many eventually dodgy projects may seem attractive a priori.

Some banks are clearly worse than others at this game, as is apparent from the red flags being raised.

However, it is important to take certain systemic factors into account as well. Traditionally, house buyers would pay an estimated 30 to 35 per cent of the purchase price from their own pocket.

The picture is changing; even with the 80 per cent upper limit on loan-to-value ratios, many financiers have found ways to effectively lower the buyer’s initial contribution. 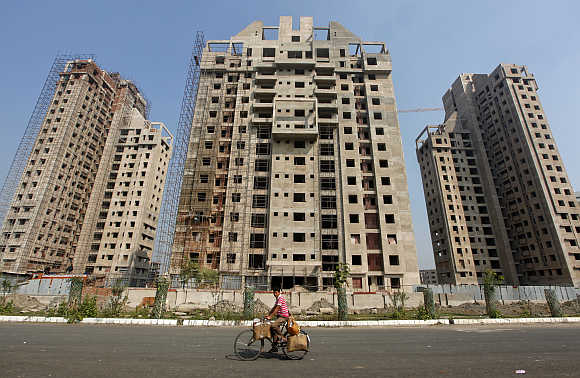 In this situation, even a relatively small decline in price can render the mortgage under water, resulting in default.

This is particularly so if the house being bought is a second or third, pure investment, purchase.

Another significant development is the rapid increase in ‘project’ funding; buyers are loaned funds to buy into a project even before construction starts, with some concessions on interest or payment terms being offered.

This effectively means that the developer is borrowing at an interest rate that individual buyers are charged, rather than the higher rate that would apply to the project.

This implicit subsidy helps get several projects off the ground that would otherwise not have been viable.

Construction delays, quality standards and other problems increase the probability of default by purchasers, since they really have no stake in the project; the loan has been taken against the prospective house.

It’s time the government and the RBI scrutinised the several risky practices that have crept into housing finance and acted to contain them before it is too late.