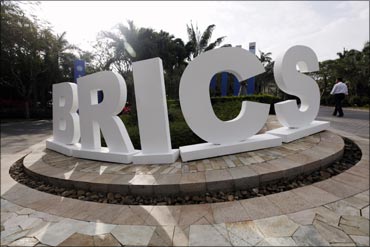 Image: BRICS would still be a noun in search of an adjective.
Photographs: Reuters. Sanjaya Baru

India adds the much-needed vowel to a group of consonants in search of a meaning. Even then BRICS would still be a noun in search of an adjective.

It started as a marketing gimmick of a Goldman Sachs executive seeking business in emerging markets Brazil, Russia, India and China (BRIC).

Indians were flattered, the Chinese were initially supercilious (how can anyone bracket China with these other three wannabes?) but it is the Russians who first grabbed the idea, feeling bruised after their Yeltsin-era wooing of the West began to get spurned during Putin's more assertive reign. Caught between preening about its membership of G-8, the rich man's club, and its desire to keep a foothold in Asia (Russia sought and secured an invitation to the East Asian Summit), Russia founded BRICS (the S added by South Africa).

India's initial response to BRICS was lukewarm partly because India was more focused on IBSA, that other noun without an adjective, and the emerging East Asian Summit (EAS). If India was dealing with the other two great democracies of the developing world, Brazil and South Africa, in IBSA, and was dealing with China in EAS, then why another summit whose only purpose it seemed was to help Russia deal with its schizophrenic existence between the West and the Rest?

So why has India warmed up to BRICS? If the fundamental objective of Indian foreign policy is to secure a global and regional environment and key bilateral relationships that would be conducive to the sustainability and stability of the Indian growth process, then BRICS offers one more platform. 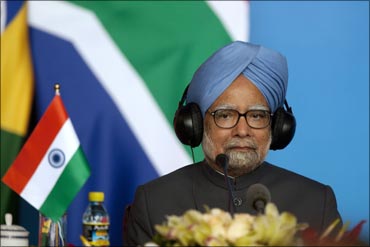 While Prime Minister Manmohan Singh himself said famously that all summitry is tourism at public expense, it helps India to be widely engaged both as an insurance and as a means of in fact building a 'multi-polar' or 'polycentric' world that it seeks.

Prime Minister Singh told the Sanya Summit: "The challenge before us is to harness the vast potential that exists among us. We are rich in resources, material and human. We are strengthened by the complementarities of our resource endowments.

We share the vision of inclusive growth and prosperity in the world. We stand for a rule-based, stable and predictable global order. We respect each other's political systems and stages of development. We value diversity and plurality.

Our priority is the rapid socio-economic transformation of our people and those of the developing world. Our cooperation is neither directed against nor at the expense of anyone." 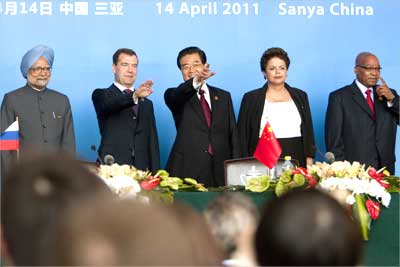 But China's commitment to respecting "diversity and plurality" is still in doubt and China has not yet won Indian trust on the question of whether it respects the territorial integrity and sovereignty of all nations and whether it stands for "a rule-based, stable and predictable global order."

That BRICS is more a way station than a summit, is proved by the fact that most of the 23 'action points' adopted through the Sanya Declaration are all about more meetings!

More than two-thirds of the 32 paragraphs of the Sanya Declaration can be lifted from many similar declarations of the alphabet soup of plurilateral groupings and summits that have now become commonplace in the emerging multi-polar world. Image: (L to R) Prime Minister Manmohan Singh, Russian President Dmitry Medvedev, Chinese President Hu Jintao, Brazilian President Dilma Rousseff and South African President Jacob Zuma at the BRICS Leaders Meeting in Sanya, Hainan. 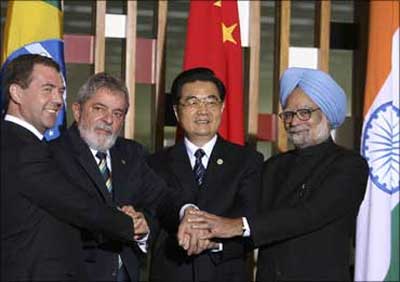 The one good purpose that BRICS can still serve is to exert pressure on the West not to block the 'Rise of the Rest', as Alice Amsden put it in her classic book bearing this name on the rise of 'emerging economies'. Amsden's 'rest' included, apart from China, Brazil, India and South Africa, South Korea, Malaysia, Indonesia, Turkey and a few others, but most of them meet at the G-20 Summit anyway, so why BRICS? Two recent developments seem to have dominated the Sanya Summit -  the events in West Asia and North Africa (WANA), the economic consequences of 'quantitative easing' by the US and the poor quality of global economic management by the US and EU. Image: Russia's President Dmitry Medvedev (L-R), Brazil's President Luiz Inacio Lula da Silva, China's President Hu Jintao, Prime Minister Manmohan Singh. 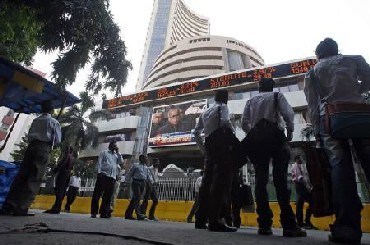 The Rest are worried about the way in which the West has intervened both militarily in WANA and economically through QE2 and the mismanagement in Europe.

While these are legitimate concerns, and India ought to be concerned since global economic stability and regional political stability in WANA are vital to India's own national security and economic growth, it is not at all clear whether India would benefit more from standing with the protestors, Russia and China, or working with the managers, US and EU.

India's initial response to the popular uprisings in WANA balanced Indian economic and strategic interests with support for the democratic sentiments of the people and for the strengthening of plural and secular political systems in the region. 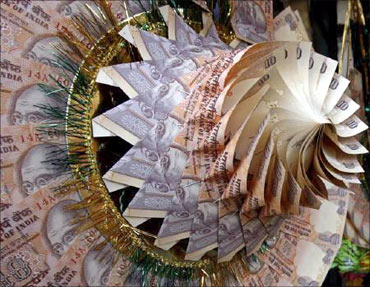 Image: Indian rupee notes.
Photographs: Reuters.
India showed that its foreign policy was not driven by self-interest alone, nor by the 20th century cliches about sovereignty, but by its commitment to the building of a more plural, liberal and secular global society.

That stance, which defines Indian foreign policy not just in terms of national interest and economic necessity, but also a moral imperative is new direction that Prime Minister Manmohan Singh has sought to provide.

This should not get diluted by an urge to cling to old doctrines, howsoever comforting they may be in times of uncertainty and stress. 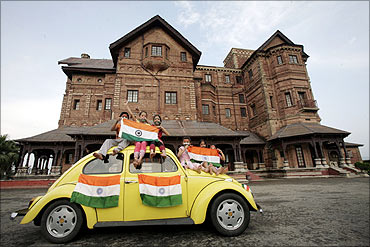 Image: Children with the Indian flag.
Photographs: Reuters.
Finally, at a time when rising energy and food prices are threatening Indian economic growth, it is not clear if the BRICS have a shared agenda for prosperity. India and China do, but Russia is a beneficiary of high energy prices and Brazil both a cause and beneficiary of high food prices.

The real world summit of consequence these days is the G-20 and at G-20 India's individual personality, as an open economy and an open society, as a plural democracy pursuing inclusive growth, should shine, rather than get subsumed under groupings of convenience with no character.