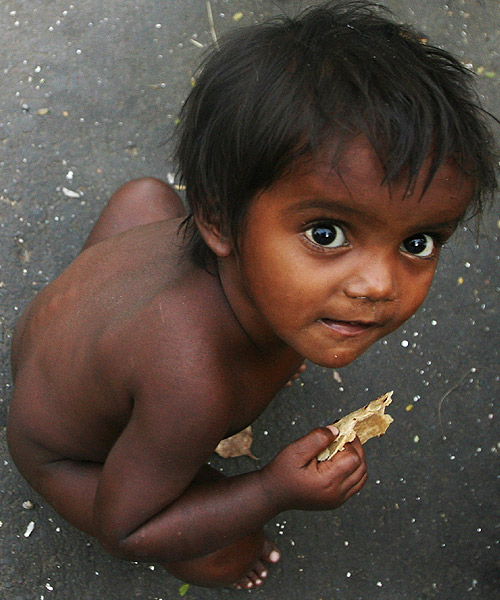 Food insecurity and hunger are rooted in bad policies, faulty design, poor governance and a lack of political will, says N C Saxena.

According to the latest Global Hunger Report, India continues to be in the category of those nations where hunger is "alarming".

National Sample Survey Organisation data show that the average per capita food expenditure during the period 1993 to 2010 increased only by 0.2 per cent annually in rural India, and fell slightly by 0.1 per cent per annum in the urban areas.

From their limited resources the poor are forced to spend more on health, children's education, transport and fuel than before.

Food is still needed, but not demanded for lack of resources. In the process they get stunted and malnourished. Endemic hunger continues to afflict a large proportion of the Indian population. 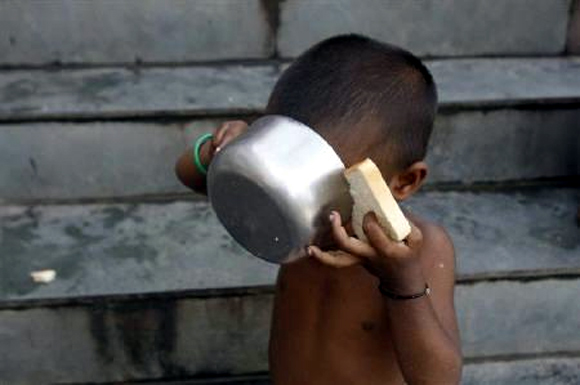 Image: A child has his breakfast at a flood relief camp in Bihar's Purnia town.
Photographs: Rupak De Chowdhuri/Reuters

Despite the President's declaration in Parliament on June 4, 2009 that a National Food Security Act would be formulated, it took the central government more than four years to bring it through an ordinance.

From a date to be notified by the government, two-thirds of all households, as opposed to only one-third right now, will be entitled to cheap cereals. However, there are operational problems.

Of these, the most important challenge is to decide the interstate allocation of foodgrain for the Public Distribution System (PDS). At present, this allocation is arbitrary and is neither based on population nor poverty.

Thus, poorer states like Uttar Pradesh (UP) and Bihar get much less food allotment than their share in poverty, whereas, it is just the opposite for the Southern states. This is why Tamil Nadu is opposing the Bill. 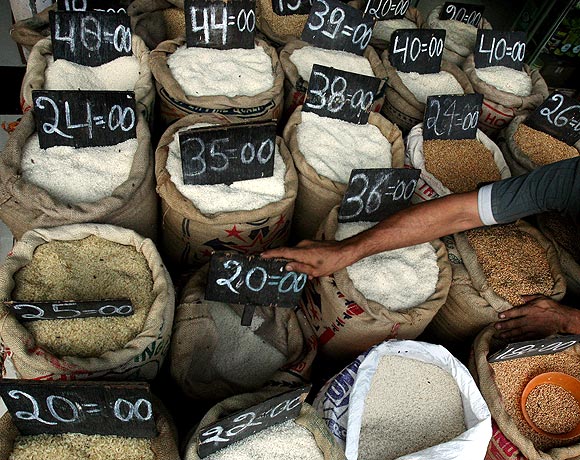 Image: A shopkeeper arranges signs with prices on bags of rice at a shop in Mumbai.
Photographs: Arko Datta/Reuters

Secondly, actual distribution cannot begin unless the eligible households are identified. The final results of the Socio-Economic and Caste Census will not be available for all the states, especially the larger states like UP, Bihar and Tamil Nadu, until the beginning of 2014.

Further, there has been a lot of secrecy in conducting the survey, and people even in states like Haryana, where the lists on paper have been shared with the people and finalised, no one knows whether he/she is in or out.

There could be a great deal of disenchantment and anger when the actual distribution of grain begins.

In order to meet the increased requirement of foodgrain for PDS, export of cereals should be stopped immediately. If basmati rice is to be exported, an equal amount of ordinary rice must be imported. It is highly unethical to export foodgrain when our own people are dying of starvation. 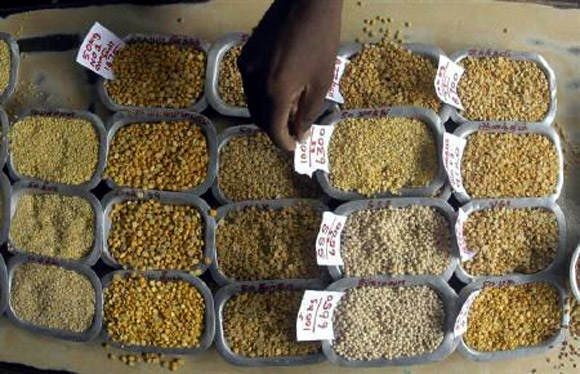 Image: A man arranges price tags on the samples of various pulses at a wholesale market in Chennai.
Photographs: Babu/Reuters

The Bill encourages states to reform the PDS, including doorstep delivery of foodgrain, end-to-end computerisation; and leveraging "Aadhaar" (UID) for unique identification of entitled beneficiaries.

The progress is extremely slow, though not in all states. Chhattisgarh, Orissa, Himachal Pradesh, and Rajasthan have undertaken state-level reforms by extending coverage, improving delivery and increasing transparency.

The best results are seen in Chhattisgarh. Here, private dealers have been replaced by panchayats, commissions have been increased and more than 80 per cent of the families have been covered under the scheme (as opposed to only 40 per cent who are officially recognised as being Below the Poverty Line or BPL under the Central government).

A regular monitoring and grievance redressal mechanism leads to swift action if foodgrain does not reach the people. 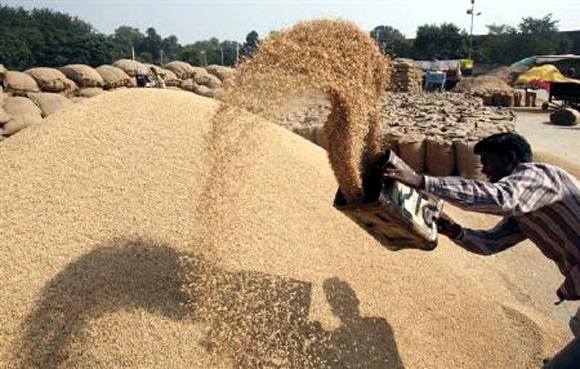 The UID programme will certainly help eliminate duplicate and fake beneficiaries from the PDS rolls.

Another advantage with the UID is making PDS entitlements portable, as beneficiaries would be able to withdraw their entitlements from any ration shop in the state. However, large-scale substitution of PDS by direct cash transfers (DCT) is not feasible, as foodgrain bought from the farmers through the minimum support price mechanism need an outlet for distribution.

Besides, DCT needs a good banking structure, a functional registration system and widespread use of debit cards. At best, it could be tried on a pilot basis in a few poor localities in metropolitan cities.

Lastly, the Central government should discourage the distribution of manufactured "ready-to-eat" food under the Integrated Child Development Scheme (ICDS) since it leads to grand corruption at the ministerial level. 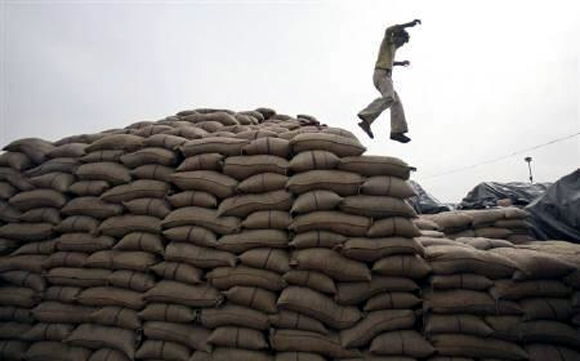 Unfortunately, the government has encouraged such tendering by laying down the minimum nutritional norms for take-home rations, including micronutrient fortification, thus providing a dangerous foothold for food manufacturers and contractors, who are constantly trying to invade child nutrition programmes for profit-making purposes.

A recent evaluation of the ICDS in Gorakhpur by the National Human Rights Commission showed that despite Supreme Court orders to provide hot, cooked meals, all centres supplied only packaged ready-to-eat food, which had only 100 calories against a norm of 500 calories, and 63 per cent of food and funds were misappropriated. Being unpalatable, half the food ends up as cattle feed. "

However, such reports, though few, are never discussed in state Assemblies, as they now meet for less than 30 days a year. We need a new law making it compulsory for the Parliament and Assemblies to meet for at least 150 days a year. 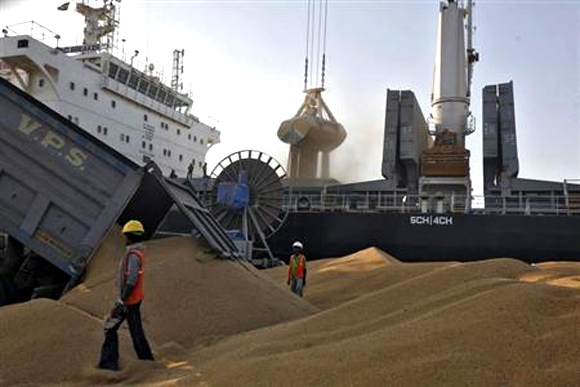 Image: A dumper unloads wheat as a crane loads onto a cargo ship at the Mundra port in Gujarat.
Photographs: Amit Dave/Reuters

The ICDS should learn from the success of the hot, freshly cooked mid-day meals programme that runs fairly well even in states not known for efficiency, whereas, the supply of packaged food in the ICDS even in Maharashtra and Karnataka is not popular with the children, besides encouraging corruption and discouraging local participation.

In the ultimate analysis, the constraints to food security and hunger are rooted in bad policies, faulty design, lack of appropriate monitoring and evaluation, poor governance and lack of political will.
Action is needed on all the fronts.

Tags: Maharashtra , ICDS , Karnataka , Food Security Bill
More
© Copyright 2023 PTI. All rights reserved. Republication or redistribution of PTI content, including by framing or similar means, is expressly prohibited without the prior written consent.
Print this
article