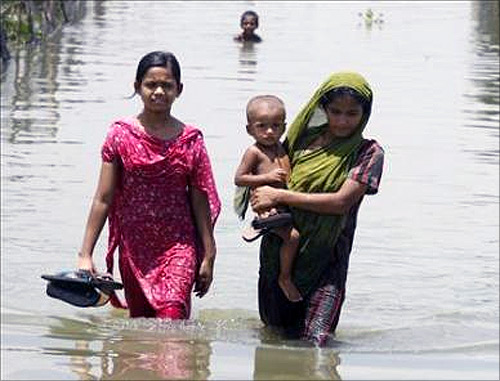 The last El Nino outlook report of the World Meteorological Organisation had said that only half of weather models in use foresee a weak El Nino to set in between June and August, a period relevant for the Indian monsoon.

Predictions by some global weather bureaus that the dreaded El Nino, a weather pattern that often derails the monsoon, may appear later this year are not good news.

Any alarm at this stage would be premature; however, some pre-emptive action is called for to minimise, if not totally stave off, the adverse impact of this phenomenon on the economy, agriculture and inflation.

There are two reasons for reserving judgement.

First, there is no unanimity among the prognoses of different weather models on either the level of probability of El Nino or its likely potency -- weak, moderate or strong -- or even its timing. 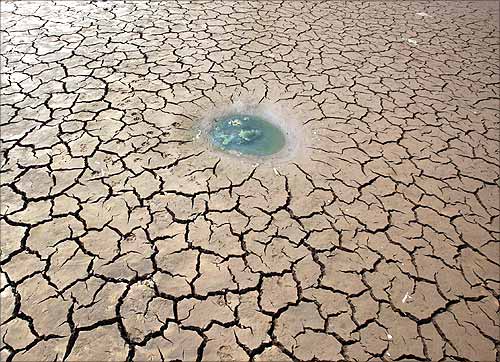 Image: A view of a partially dried-up pond at a village of Guangnan county, China.
Photographs: Reuters

The last El Nino outlook report of the World Meteorological Organisation had said that only half of weather models in use foresee a weak El Nino to set in between June and August, a period relevant for the Indian monsoon.

The other half predicts neutral conditions to continue.

The Japanese Meteorological Agency last month put the probability of El Nino at 50 per cent.

The US Climate Prediction Centre, on the other hand, last week predicted a 45 per cent chance of a weak El Nino from June to August and 50 per cent from August to September.

None of the models, notably, has yet forecast a strong El Nino.

Second, the extent to which El Nino may affect the Indian monsoon is uncertain.

There is, indeed, no one-to-one correlation between El Nino and monsoon failure. 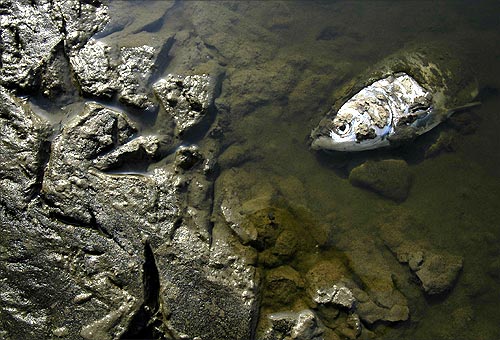 Image: A dead fish in a reservoir.
Photographs: Reuters

Of the seven El Nino events since 1991, only two synchronised with drought.

There have been occasions when the monsoon rainfall exceeded the normal range regardless of El Nino.

The most striking case was in 1994, when the monsoon precipitation was 10 per cent above normal despite El Nino.

That said, the possibility of the economy taking a hit if El Nino does disrupt the monsoon cannot be wished away.

Last week, Crisil, a credit rating and market research company, said it might have to scale down the economic growth projection for 2014-15 to 5.2 per cent from six per cent in the event of El Nino-driven poor monsoon. 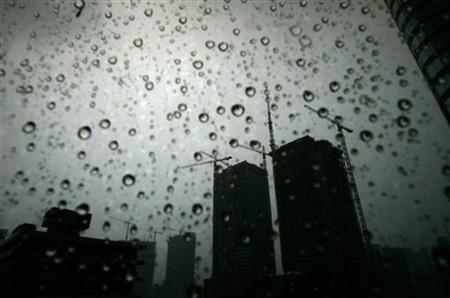 Image: Contingency plans are said to be already in place for all parts of the country.
Photographs: Carlos Barria/Reuters

The consumer price inflation may surge above its current forecast of eight per cent, considering that nearly 50 per cent weight was given to agriculture-related articles.

However, there are some reassuring factors, which indicate that the economic fallout may not be as bad as feared.

The existence of huge foodgrain inventories and robust farm production in the past few years at a stretch are notable ones among them.

Besides, the agriculture sector has acquired a degree of resilience against drought, as is evident from positive growth of 0.8 per cent in the 2009 drought year when rainfall had dipped by 27 per cent.

This apart, last year’s prolonged monsoon season and copious winter rainfall that is continuing even in March are expected to leave residual moisture that may prove useful for the next kharif sowing season.

Moreover, the water stock in most reservoirs is adequate to meet the heightened demand for irrigation and power generation.

In any case, contingency plans are said to be already in place for all parts of the country.

The need is to back these plans up with actual placement of crop inputs, notably seeds of alternative crops, to implement them.