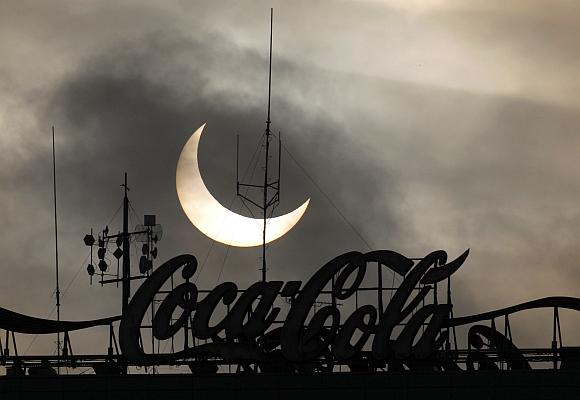 Chharba-Langha Road, 30 km from Dehradun city, is a green industrial belt. This patch on the western fringes of the Doon Valley is also known for its lush green khair and sheesham trees.

In many ways, the area is an example of sustainable development, where over 50 Micro, small and medium enterprises (MSMEs) exist in harmony with nature.

It is at this place that Coca-Cola is planning to set up its Rs 600-crore (Rs 6 billion) bottling plant.

On April 17, Hindustan Coca-Cola Beverage (HCCBPL), the Indian arm of Coca-Cola, signed an MoU with the State Industrial and Infrastructure Development Corporation of Uttarakhand, the government-controlled nodal agency for industrial development, to set up the plant on 60 acres of land.

The Vijay Bahuguna government considers the proposed investment as one of its major achievements. 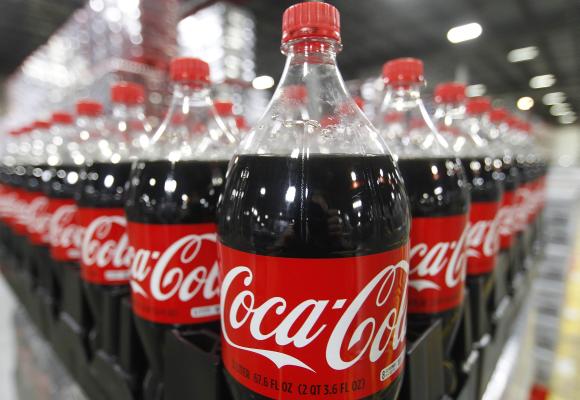 Image: Bottles of Coca-Cola are seen in a warehouse.
Photographs: George Frey/Reuters

However, the Chharba village panchayat played a spoilsport to the Bahuguna government and Coca-Cola's plan by unanimously passing a resolution declaring it would not allow the beverage MNC to go ahead with its plans.

Local gram pradhan Rumi Ram Jaswal, who also happens to be a BJP activist, contends it would adversely affect the area's environment. Scores of Chharba villagers have been organising a series of protests against Coca-Cola's entry to their village.

The protesters fear the plant could lead to environmental degradation in the form of depletion of the water table.

They also apprehend a large number of trees will have to be felled, for which Jaswal claims the government will acquire 520 bighas of land.

"We will not allow the government to cut down our trees or take an inch of our land," declares Jaswal. 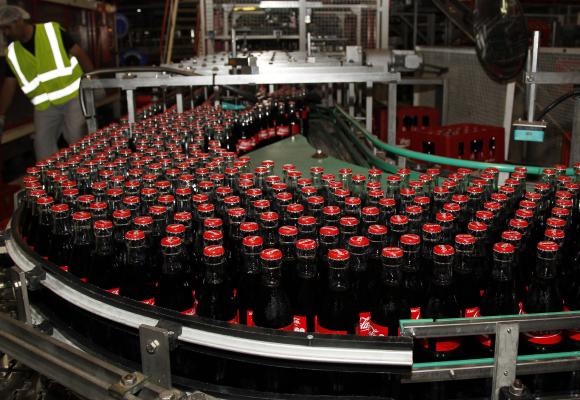 Image: Bottles of Coca-Cola are seen on the production line at their bottling plant.
Photographs: Jacky Naegelen/Reuters

In contrast, the local Congress MLA, Nav Prabhat, says: "When the plant is set up, people will get employment and land prices will also shoot up," says the former cabinet minister.

He points to the existing MSMEs, which not only provide employment to the locals, but also create other business opportunities.

Coke executives are wary of saying anything concrete for the moment. They agree the MoU has been signed with the state government, but no land has been allotted to the company.

Some of them say it is not even final whether HCCBPL will start operations here. The initial plan was to produce most of its carbonated beverages, juices, fruit-based drinks here.

Coke has also said it planned to use surface water, thus avoiding any impact on the ground water.

Views like these have not reassured environmentalists and many prominent green warriors such as Avadhash Kaushal, Chandi Prasad Bhatt, Anil Joshi and Vandana Shiva, have voiced concern the plant might have a negative impact on the environment. 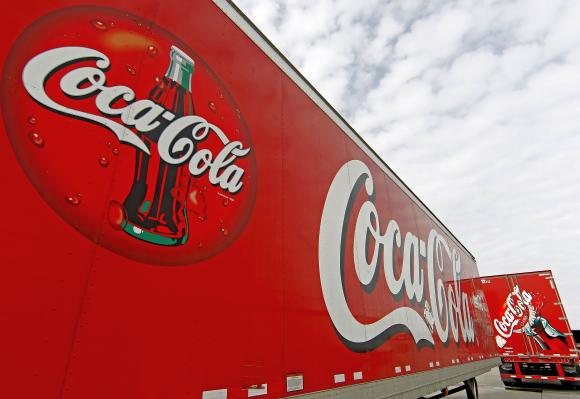 Image: Trucks containing cases of Coca-Cola, which will be delivered to stores, sit outside a warehouse.
Photographs: George Frey/Reuters

They point to the Coke plants near Plachimada in Kerala and Varanasi in Uttar Pradesh, where it is alleged the ground water has been polluted.

Joshi, the founder of Dehradun-based NGO HESCO, has asked the government to set up a high-powered committee of experts to make a thorough environmental study on other Coke plants in the country.

Vandana Shiva, who heads the NGO Navdanya, has asked the government to scrap the MoU with Coca-Cola saying it would affect the local ecology as well as create a severe water problem in the area. Bhatt concurs with these demands.

In addition to this, says Kaushal, who played an active role in putting an end to the rampant limestone quarrying in Dehradun and Mussoorie, the project can also adversely affect the water flow at the Yamuna barrage near Daakpathar, which houses a series of big hydel projects belonging to the state-run power generation company, UJVN (Uttarakhand Jal Vidyut Nigam Ltd) Ltd. 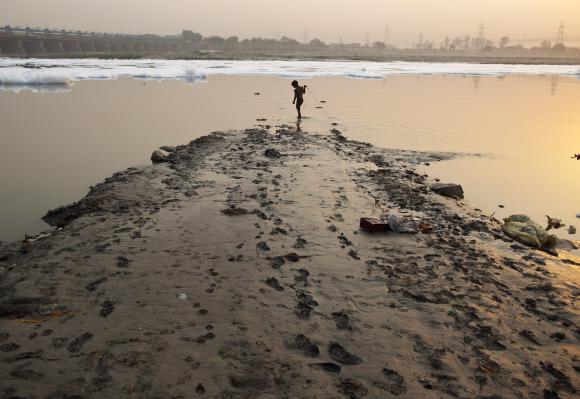 Image: A boy searches for coins thrown by Hindu devotees in the waters of the river Yamuna.
Photographs: Ahmad Masood/Reuters

The Uttarakhand government is treading a cautious path so as not to provoke the protestors.

"The company will have to take all necessary environmental clearances," says Rakesh Sharma, principal secretary (industrial development). Earlier, it had stated it had cleared the Coke proposal under the single window system.

Sharma explains the proposed plant comes under the Orange category (industrial unit that may create pollution and emissions that can be controlled with installation of technology).

Several notifications under the environment (protection) rules 1986 have put up certain restrictions on industrial units in the Doon valley. However, Sharma made it clear the new plant will be equipped with all environmental pollution safeguards.

He also tries to dispel fears that the company will overexploit the waters of Yamuna. "The initial requirement for Coke plant will be only 50,000-200,000 litres a day. So, there should be no problem," said Sharma.