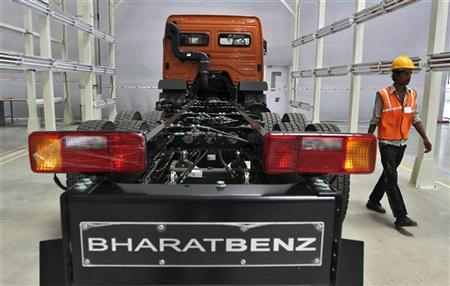 In a month or so, don't be too surprised if you pull up at your favourite dhaba on the highway and find a sleek, new truck parked on one side with the word 'Benz' imprinted above the front grill.

It may be difficult to reconcile greasy parathas with what is arguably the most famous luxury auto brand in the world. But, Benz certainly doesn't think so.

In a month from now, Daimler India Commercial Vehicles, the 100-per-cent subsidiary of $142-billion Daimler AG, will unleash on Indian roads a series of trucks specifically made for Indian buyers through a freshly-minted brand called BharatBenz. 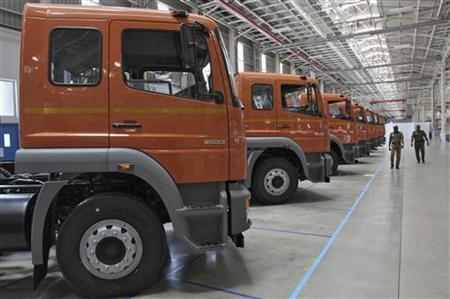 The first BharatBenz to hit the road will be a 25-tonne truck. It will one among more than a dozen or so launches planned by the company over the next 18 months.

These products will be in the range of 6-49 tonnes, and will include trailers, tractors and even a tipper. Sources say many of these are similar to those sold by Tata Motors and Ashok Leyland, but offer better power.

So, how good a deal are Benz trucks? For instance, a 25-tonne rigid truck sold by Tata or Ashok Leyland delivers 175 horse power (hp), while one of similar size from the BharatBenz stable would, apparently, churn out 250 hp peak power. 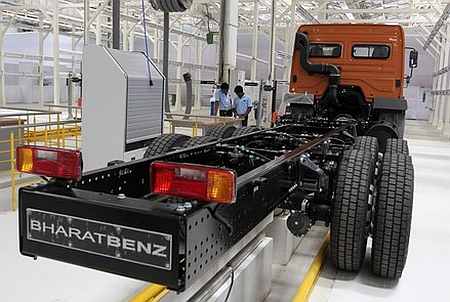 Is that enough for Benz to wrest loyal customers from them? Will it do to the truck industry what Volvo did to buses in India? 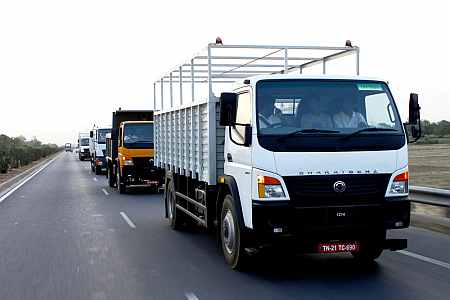 That's not an easy question to answer but what is more readily apparent is why Benz is here in the first place. Over past decade, road freight has grown at compound annual growth rate (CAGR) of 11.9 per cent, compared with rail's 1.4 per cent.

Currently, at around 75 per cent, the share of road in freight is expected to stabilise at around 85 per cent.

According to Research and Markets, the Indian truck manufacturing industry had total revenues of $33.2 billion in 2011, while growing at a 13.2 per cent CAGR between 2007 and 2011. 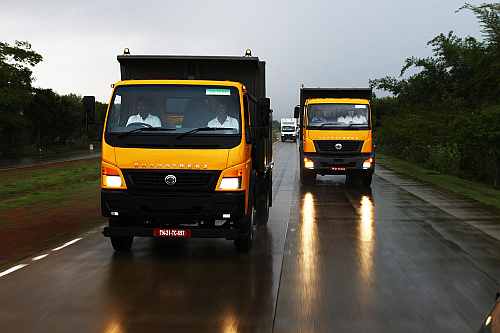 "India is a do-or-die market for global original equipment manufacturers," says Abdul Majeed who leads auto practice at global consultancy firm PriceWaterhouseCoopers. "With Benz entering the market, there will be a bloodbath for market share, and domestic players will have to react to customer's demand much faster," he adds.

More than 75 per cent of the industry is controlled by fleet operators who have five trucks or less while around five to six per cent have a fleet size of more than 20 trucks. 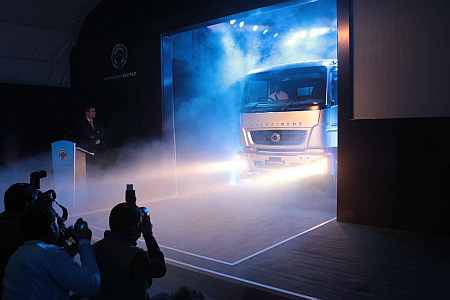 Benz is betting big on what their brand has always been about -- quality and service.

V R V Sriprasad, vice-president, marketing, sales and after sales, DICV, says, "Truckers are not well-educated but they are smart. They have excellent trucking business sense. They do not have blind faith in one brand as is the popular notion. We can offer them modern products, with better reliability coupled with the required service back up which they have been looking for".

Though these Daimler trucks are yet to be sold in the open market, company-appointed dealers say that interest is tremendous. 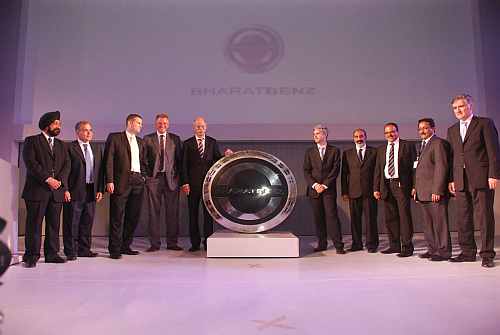 "We are not accepting orders yet but we have several of them (fleet owners) lining up with full payment. Because of their size it was difficult to say no, so we decided to sell some units to a select few", says a senior executive from Wasan Motors.

Daimler has given contracts for 90 such dealerships of which at least 35 will become operational before the national launch in October, and another 30 would be added by the end of the year. 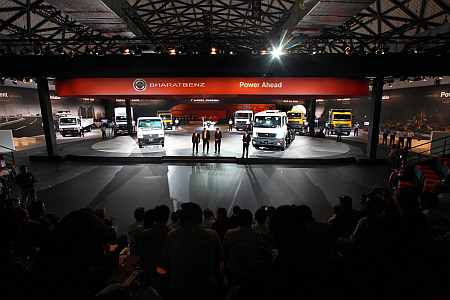 It's not as if other foreign players haven't tried to breach the Indian truck citadel in the past. Though international truck brands such as Volvo, Navistar, MAN and Scania debuted in India several years ago, none have been successful in giving Tata Motors or Ashok Leyland a run for their money. Market leader Tata Motors has 62 per cent of the domestic market while Chennai-based Ashok Leyland has 20 per cent. Both are tough competitors.

Tata, which has been building trucks for more than six decades, is already planning new service offerings and several new launches this year.

The company is also underscoring its technological competencies by launching amongst India's first five-axle trucks. 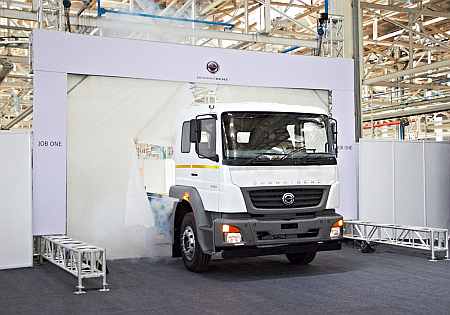 "We will continue to be close to our customers, respond to their changing needs and are proactively taking steps to ensure that we remain the preferred brand to them," says a Tata Motors spokesperson.

This truck is unique for its five axles, including a lift axle, that enables it to carry more load, more efficiently. However, Leyland's true weapon is its pan India dealership network -- 417 strong -- which promises to give Benz a run for its money. 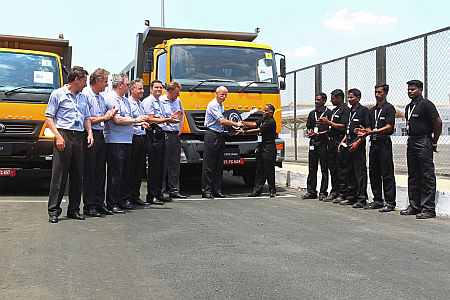 Meanwhile Mahindra & Mahindra, which has a tie-up with US-based Navistar, is due to launch around seven new MHCV trucks this year, hoping to boost its market share which already trebled to one per cent.

All of Benz's competitors have upped the ante in services offered after sales. These include faster assistance during breakdowns, educational scholarships for children, loyalty programmes and comfortable waiting lounges at service stations.

Nevertheless, Benz is putting pedal to metal and, having lined up investments of over Rs 4,400 crore, plans to roll 36,000 trucks that are specifically geared to handle Indian conditions, off the assembly line at Oragadam, near Chennai. It plans to double production to 72,000 units the next year. 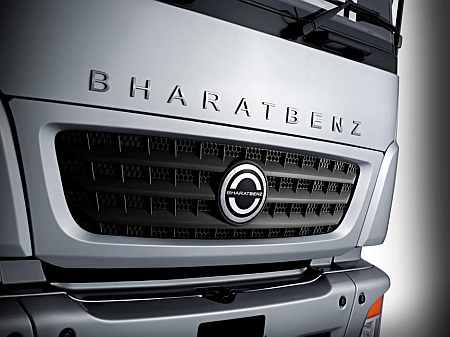 Plus, in true German style, Benz has approached unraveling the intricacies of India's truck market with clinical rigour.

In mid-April, it undertook what it called a 'power yatra' where a convoy of six BharatBenz trucks of different types cruised 8,000 km of the Golden Quadrilateral, across 22 cities, in an effort to better understand the country, its trucks and the men who drive them.

They talked to drivers, mechanics, fleet owners, body assemblers -- anybody and everybody who had anything to do with the truck market.

If Bharat Benz is anywhere near as fastidious about quality and service as its parent company, it will be a formidable challenger to the current rulers of the Indian truck landscape.

With inputs from Abhineet Kumar in Mumbai.