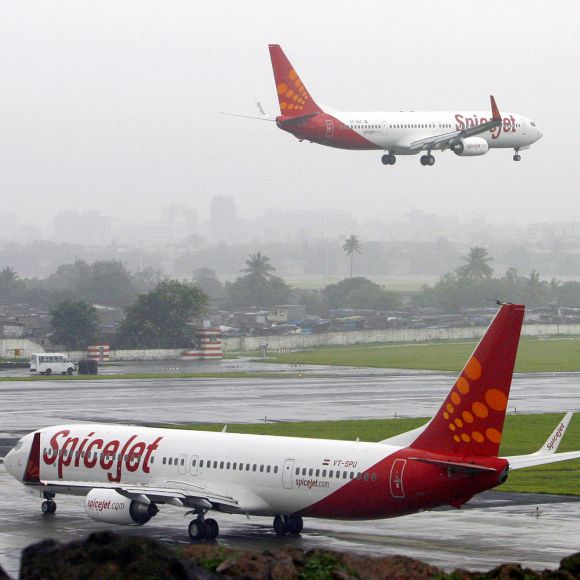 Amid continuing difficulties in airline space to generate profits and raise funds, independent auditors of at least two Indian carriers have raised red-flags over their 'going concern' status claims.

Typically, a company is known as a 'going concern' if it has sufficient resources to continue to operate indefinitely and to avoid any potential bankruptcy risks.

While auditors of now-grounded Kingfisher Airlines have been raising red flags for a long time, auditors of low-cost carrier SpiceJet have pointed out in their latest quarterly review report the airline's total liabilities exceeded its total assets by Rs 1,145.58 crore (Rs 1.15 trillion) as on June 30, 2014.

"These conditions, along with other matters...indicate the existence of a material uncertainty that may cast doubt about the company's ability to continue as a going concern," SpiceJet's auditor SR Batliboi and Associates LLP said. 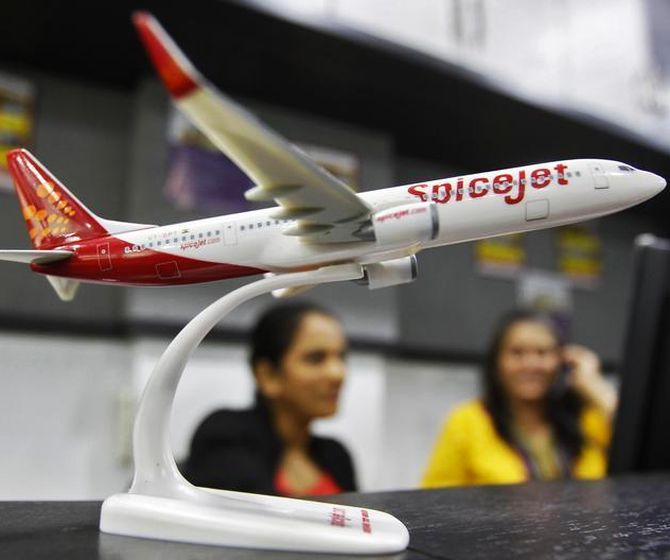 Image: Employees work inside a travel agency office besides a model of a SpiceJet aircraft.
Photographs: Amit Dave/Reuters

No provision has been made for interest of Rs 7.5 crore (Rs 75 million) up to June 30, 2014, relating to earlier years on the outstanding inter-corporate deposits taken by Spicejet.

If these amounts had been accounted for, SpiceJet's first quarter net loss, as also accumulated losses, would have been higher, the auditor noted. SpiceJet reported a net loss of Rs 124.10 crore (Rs 1.24 billion) for the April-June 2014 quarter, as against a net profit of Rs 50.56 crore (Rs 505.6 trillion) in the year-ago period.

Jet Airways' auditors said in their latest report for the quarter ended June 30, 2014 that the company's continuance as a "going concern" depends on deeper synergies with Etihad Airways and its ability to raise funds in the future.

Kingfisher is yet to publish its financial results and the auditor report for the latest quarter ended June 30, 2014. 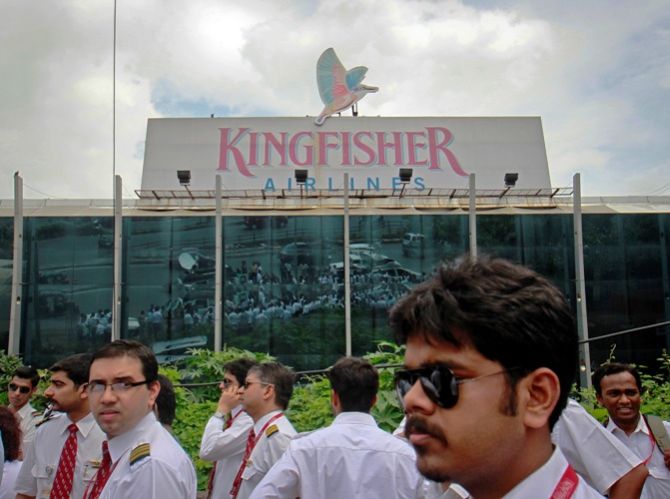 Image: Striking employees stand in front of the Kingfisher Airlines office during a protest march against the company in Mumbai October 5, 2012.
Photographs: Danish Siddiqui/Reuters

The auditors of all three listed airlines have been saying for last few quarters that the "appropriateness of the going concern basis" is dependent on their ability to generate adequate finance to meet obligations and to operate profitably.

However, the management of all three carriers have defended their decisions to prepare their respective financial statements on 'going concern' basis.

Kingfisher has faced most adverse auditor comments, while auditors for Naresh Goyal-led Jet Airways and Maran family-run Sun Group's Spicejet have also been commenting on their 'going concern' status. 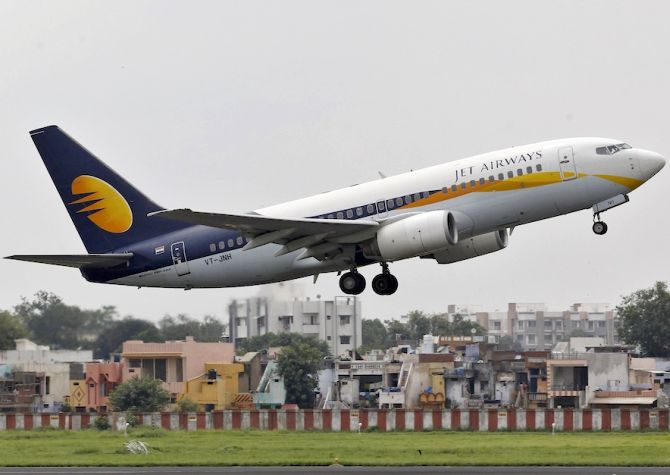 With regard to Jet Airways' 'management statement' about alliance with Etihad and the subsequent positive impact on cash flows, its auditors said that this has been taken into account by the company for preparation of the financial statement on a going concern basis.

"The appropriateness of assumption of going concern is dependent upon realisation of the synergies from alliance with the strategic partner and on the company's ability to raise requisite finance generate cash flows in future to meet its obligations, including financial support to its subsidiary," Deloitte Haskins and Sells LLP said in the auditor's note. Drawing attention to the investments and loans to its Jet Lite unit, the independent auditors' review report said, "The subsidiary continues to incur losses and the accumulated losses have fully eroded the net worth of the subsidiary.

"The assessment of carrying amount of the aforesaid investment and loans is critically dependent upon achievement of the expected operating performance by the subsidiary after re-organisation of the fleet as mentioned in the note."

Tags: Jet Airways , SpiceJet
More
© Copyright 2022 PTI. All rights reserved. Republication or redistribution of PTI content, including by framing or similar means, is expressly prohibited without the prior written consent.
Print this
article