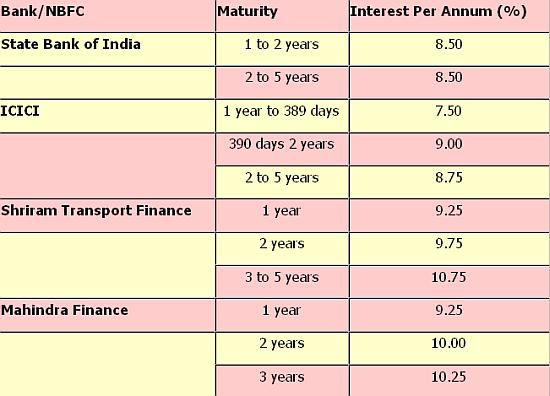 With falling interest rates, this might be your last chance to lock your savings in deposit-taking non-banking finance companies (NBFCs), an option that's currently been giving higher rates of return than banks' domestic term deposits.

The rates offered by NBFCs on one-year fixed deposits are 75-175 basis points higher than those top banks offer on their domestic fixed deposits.

The country's top commercial banks offer 8.5-9 per cent interest rates a year on fixed deposits with maturity of two-three years.

Though there are some banks that offer even higher rates - Axis Bank, for example, offers 9.30 per cent a year for two-three-year tenure; slightly higher for senior citizens - deposit-taking NBFCs offer 9.75-10.75 per cent a year in the same maturity tenure.

But, State Bank of India offers 8.50 per cent for the same tenure, while ICICI Bank and HDFC Bank offer 8.75 per cent.

"For an investor in the higher tax bracket, if he is conservative and expects consistent returns, NBFCs' fixed deposits would be fine. But, he needs to be content with lower post-tax rates. For him, debt funds may be more attractive due to capital gains tax treatment. The problem there is that it does not offer a specific return and the returns can vary," says Suresh Sadagopan, founder of Ladder7 Financial Advisories.

These high rates, however, might not sustain for long. The Reserve Bank of India (RBI) might cut interest rates further.

In 2012-13 so far, RBI has already slashed the repo rate by 75 basis points. And, as the inflation rate falls, RBI is expected to effect another rate cut in its mid-quarter review of the monetary policy on March 19.