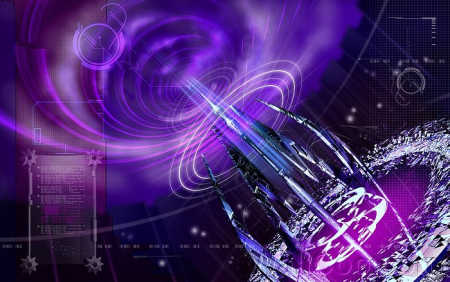 Image: A peek into the future.
Photographs: Reuters

What does the future hold for the technological world?

Let's take a peep with the help of some amazing photos. 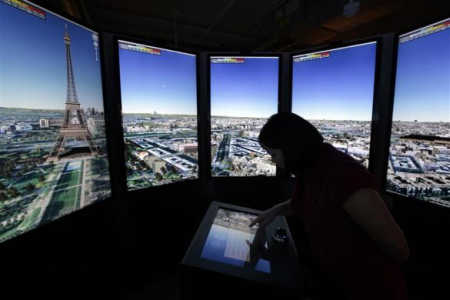 Katharine Ng zooms in to Paris on panoramic Google Maps screens at the Google campus near Venice Beach, in Los Angeles, California, on January 13, 2012.

The 100,000 square-foot campus was designed by architect Frank Gehry, and includes an entrance through an iconic pair of giant binoculars designed by Claes Oldenburg and Coosje van Bruggen.

Around 500 employees develop video advertising for YouTube, parts of the Google social network and the Chrome Web browser at the site. 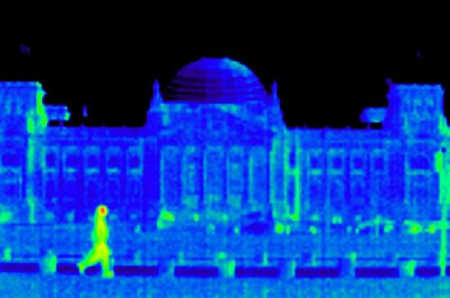 A pedestrian passes the Reichstag building, seat of the German lower house of Parliament Bundestag, on a cold winter day in Berlin January 31, 2012. Picture taken with a thermal camera. 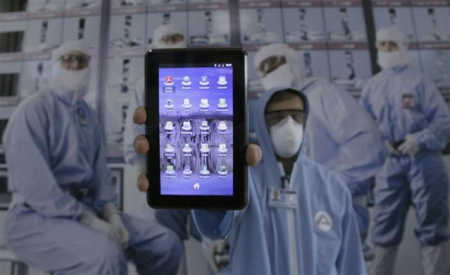 An employee demonstrates a "Police Pad" at the Algorithm factory in Tbilisi on January 11, 2012. Five thousand police officers will receive portable field computers, equipped with features that will assist them with their work, assembled at this factory, according to local media. 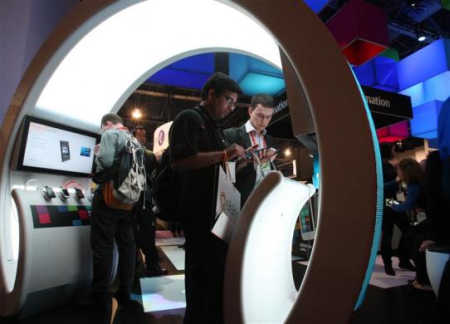 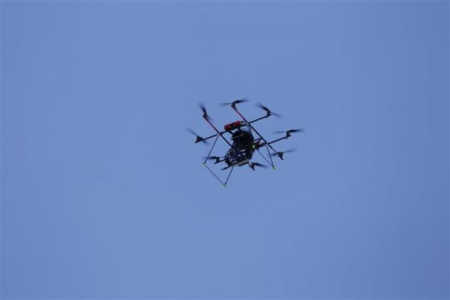 A TV drone flies during the second practice of the men's Alpine skiing World Cup downhill race at the Lauberhorn in Wengen, Switzerland, on January 12, 2012. 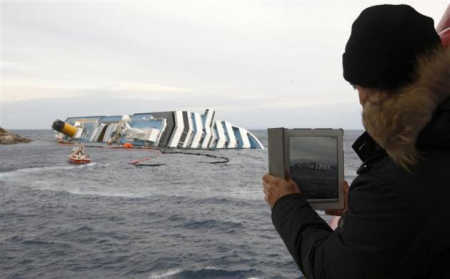 Image: A man on a ferry uses an iPad.
Photographs: Reuters

A man on a ferry uses an iPad to take a photo of the cruise liner Costa Concordia off the west coast of Italy at Giglio island on February 2, 2012. 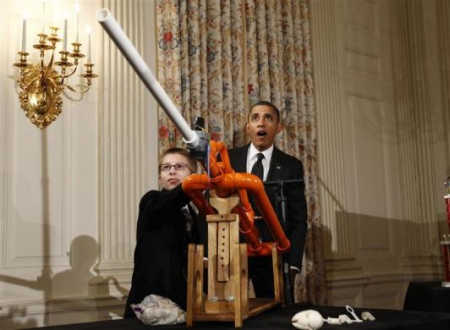 President Barack Obama reacts as Joey Hudy of Phoenix, Arizona, launches a marshmallow from his Extreme Marshmallow Cannon in the State Dining Room of the White House during the second White House Science Fair in Washington February 7, 2012.

The fair celebrates the achievements of student winners of a broad range of science, technology, engineering and math competitions from across the country. 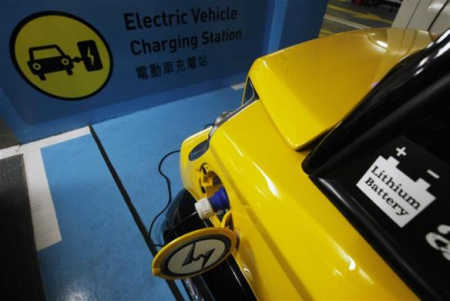 Image: The latest version of My Car.
Photographs: Reuters

The latest version of 'My Car', an electric car made by the Hong Kong Polytechnic University, is recharged in Hong Kong on January 30, 2012. 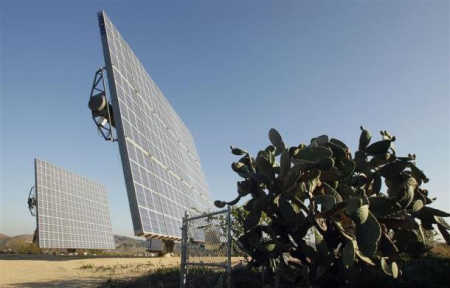 Amonix's CPV solar panel cells are seen next to cactus at the Lyle Center on the Cal Poly Pomona campus in Pomona, California, on January 17, 2012.

A fledgling but fast-growing solar technology, also known as concentrating photovoltaics, or CPV, that multiplies the sun's power up to many hundreds of times promises to deliver cheaper electricity than traditional panels and has received the backing of some major industry players. 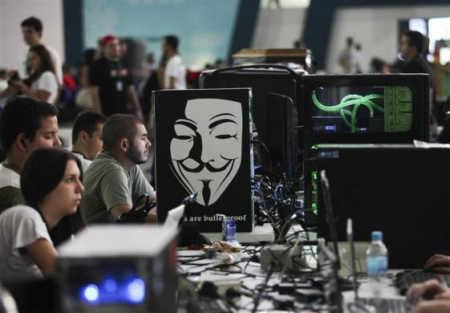 Participants sit at the games area of the Campus Party event in Sao Paulo on February 7, 2012. Campus Party is an annual week-long, 24-hour technology festival that gathers around 7000 hackers, developers, gamers and computer geeks from around the world. 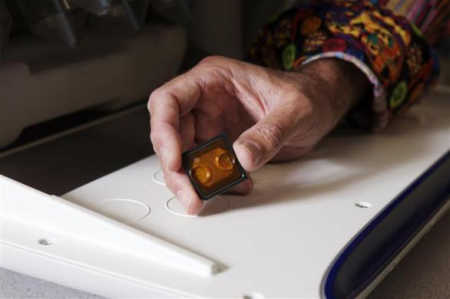 Ion Torrent CEO and Chairman Jonathan Rothberg holds a semiconductor sequencing chip that will be used in the new Proton semi-conductor based genome sequencing machine in Guilford, Connecticut, on January 5, 2012.

After years of predictions that the "$1,000 genome" - a read-out of a person's complete genetic information for about the cost of a dental crown - was just around the corner, a US company announced on January 10, 2012, that it has achieved that milestone and taken the technology several steps ahead. 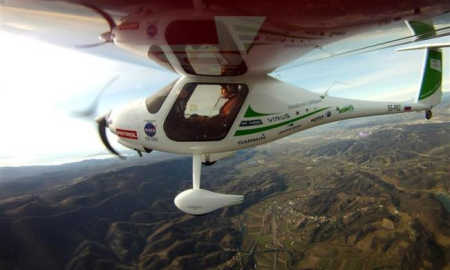 Matevz Lenarcic flies over the mountains during test flight in Ajdovscina, Slovenia, on January 4, 2012.

Biologist and environmentalist Lenarcic plans to set off on a two-month journey around the world in an ultra-light aircraft. He aims to break the records for the lightest aircraft and the least amount of fuel used to fly around the world, while raising awareness of global air pollution.

He will fly the Virus-SW 914 ultra-light single-engine airplane produced by Slovenian company Pipistrel. The aircraft is a modified version of one of their earlier models which won awards in Nasa-sponsored competitions for its exceptional fuel efficiency in 2007 and 2008. 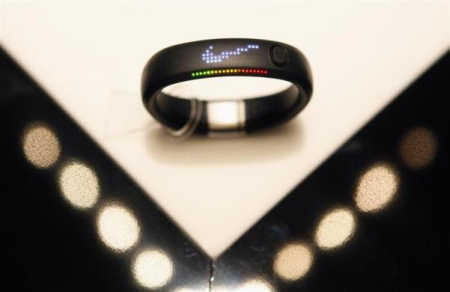 The new Nike FuelBand, an innovative wristband that tracks and measures everyday movement for, what Nike says, motivates and inspires people to be more active, is seen on display in New York on January 19, 2012.

The Nike Fuelband is available in the US at Nikestore.com for a suggested retail price of $149.