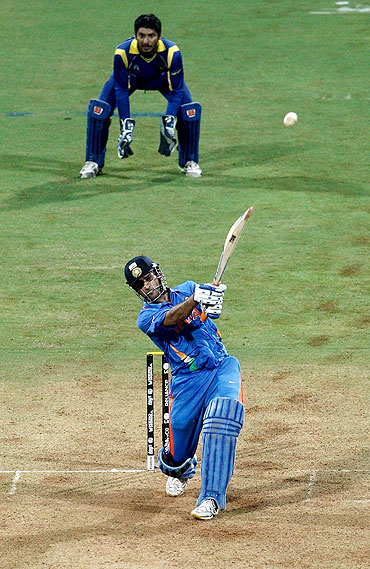 Management lessons from Dhoni have universal appeal and can be used by corporates and even the UPA, to reflect on existing structures and strategies, says Sanjeev Nayyar.

Indian cricket captain Mahendra Singh Dhoni's boys have done the country proud. As Dhoni lifted the ICC Cricket World Cup, I thought of another Indian captain (and Prime Minister) Manmohan Singh and the unenviable position he finds himself in today.

The globally respected economist is surrounded by scams, tainted CVC issue, billions of rupees stashed away in foreign banks, allegations of buying votes, etc. The United Progressive Alliance-II could author, How to kill your country's national airline.

Management lessons from Dhoni have universal appeal and can be used by corporates to reflect on existing structures and strategies. In order that readers relate to them easily the article draws a parallel between the World Cup, on the one hand, and Manmohan Singh/Sonia Gandhi on the other. 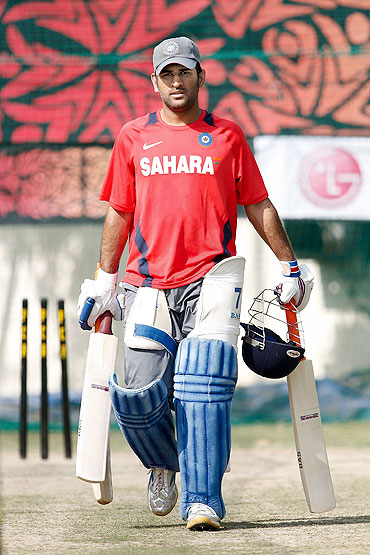 1. Every team can have only one captain

Team India is led by Mahendra Singh Dhoni. It is clear that the entire team has thrown its weight behind him.

Team UPA has two captains. One holds the constitutional post of prime minister and other is the Congress party President. The structure is like that of the Church and State which existed in Europe.

Any management practitioner will tell you that a team with two captains cannot realise its true potential. A leading MNC appointed two managing directors for its businesses, but soon realised the need to have only one MD.

Over the last seven years, we have seen UPA captains play the game differently. Manmohan Singh wants to buy peace with Pakistan by making unilateral concessions, while Sonia Gandhi realises the anti-Pakistani sentiment amongst the electorate.

So an announcement from the Prime Minister's Office usually gets countered by the party. Two, the PMO and the National Advisory Council have different views on economic matters. 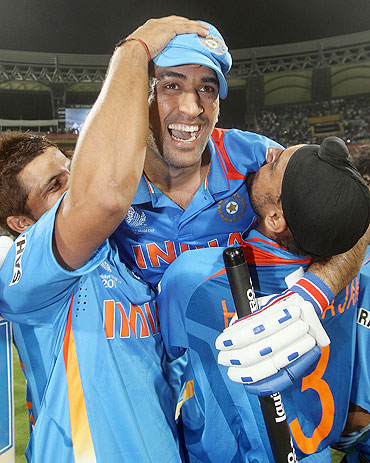 2. The captain must accept responsibility for the team's performance

Mahendra Singh Dhoni never sought to deflect criticism for India's poor showing by blaming individual players: the buck stopped with him. In spite of being under tremendous pressure, he came across as a man in control. He was forever seen to be thinking and acting for 'Team India'.

Conversely, Manmohan Singh chooses to keep maunvrat (silence) till the problem escalates. After that, he deflects the issue by taking the allegation personally: 'I am clean'. Next, 'What can I do since I relied on a colleague or facts were withheld?' There is a sense of helplessness in Manmohan Singh's voice.

As UPA's captain two, Sonia Gandhi has not accepted responsibility for the worst scams in India's history. 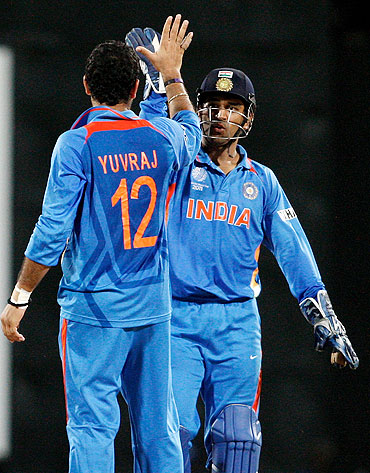 3. If you have the conviction, stick your neck out

Indian pace bowler Ashish Nehra had not done well in earlier games but had performed well against Pakistan in the World Cup semi-finals. Critics wanted Ashwin to play but Dhoni insisted on Nehra who reposed the captain's faith by bowling superbly.

Dhoni does not allow old ways of thinking to prevent him from taking unconventional decisions, knowing very well that only some might work.

The one time that Manmohan Singh showed admirable conviction was in getting the Indo-US Nuclear deal passed by Parliament. The same attitude was lacking in the run-up to the Commonwealth Games.

Sonia Gandhi rarely speaks out on matters concerning India except during elections. She prefers status quo to change!

Dhoni, on the other hand, accepts mistakes and shares vulnerability publicly. This makes him human and has endeared him to the common man. 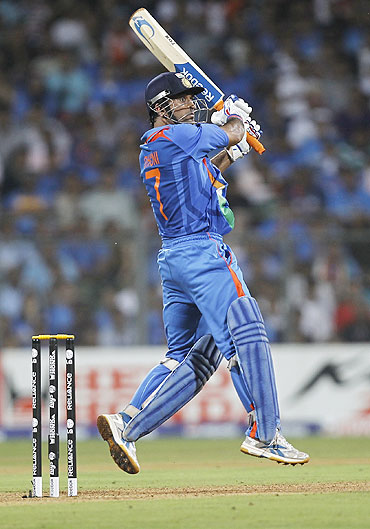 4. Accept the pair of opposites

Any public figure will vouch that the public can garland you on one day and throw stones the very next. Dhoni has learnt this bitter truth early in life.

A TV reporter asked him of the scene outside his Ranchi house if India won the World Cup. He said there would be big celebrations; yet in the same tone told viewers (without any anguish) of the protests outside his house when India played badly a few years ago.

People take a lifetime to understand and accept that life is full of opposites (joy and sorrow, winning and losing, pleasure and pain), but Dhoni has understood this at age 29.

Team UPA might find this philosophy of the Bhagvad Gita too difficult to digest. 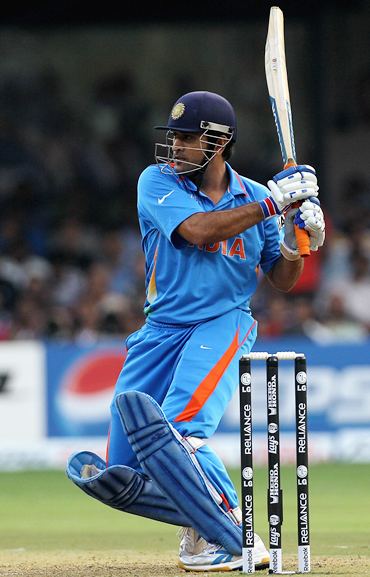 5. Winning is about teamwork and motivating your colleagues

In the post-match conference after India had won the World Cup on April 2, former India captain-turned-TV-commentator Ravi Shastri asked Dhoni why he chose to bat ahead of the man in form, all-rounder Yuvraj Singh.

Dhoni said that after he was convinced of the idea, he spoke to coach Gary Kirsten and the seniors before going ahead.

He understands the importance of drawing from seniors' experience and wisdom. This way they feel valued, he invites their blessings and thus builds teamwork.

A person who has innate confidence in himself tends to have a collaborative approach.

When Nehra dropped a catch in the semi-finals Dhoni did not admonish him but asked to let go. This motivated Nehra whose performance was outstanding.

Unlike in the past, Dhoni did not allow regional quota system to influence team selection. Only performance mattered! 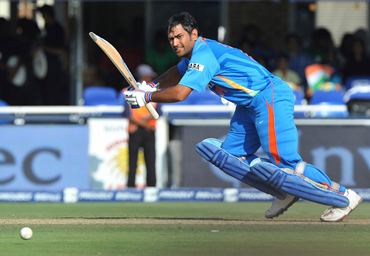 6. Keep cool, and be focused and determined

Throughout the last three World Cup matches (including the final), one saw a cool and composed Dhoni even though he expressed anger for Piyush Chawla in an earlier match.

Playing in front of home crowds and being watched by millions can make the best wilt under pressure.

When Australia and Pakistan were batting in a flurry, Dhoni was calm and focussed on the game at hand. There were no impulsive bowling or fielding changes.

I am sure you noticed the determination in his eyes when Dhoni hit the World Cup winning six: it was as if he were stating, 'I will not rest till we have won the Cup'.

Taking your work to a logical conclusion is another quality. Dhoni always spoke with respect about others teams and criticised his co-players in a very nice way.

Opening batsman Gautam Gambhir's missing out on scoring a memorable century in a World Cup final game was entirely his fault, said Dhoni.

Dhoni heard criticism, probably reflected on it, but converted it into positive energy and let performance speak. He is a quiet worker.

Every Indian needs to imbibe these qualities from the nation's cricket team captain. 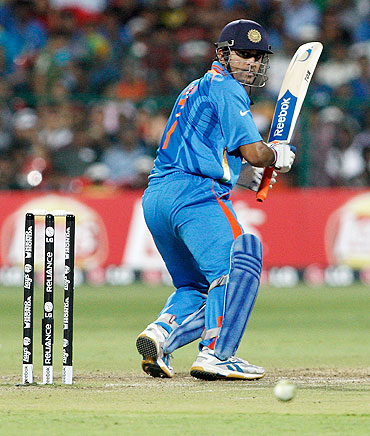 7. Humility and lack of flamboyance

The post-final period saw a display of emotions by many players. Dhoni hugged and congratulated many but underplayed his presence, was inconspicuous after a while. There was no display of showmanship or blowing his own trumpet. He displayed exemplary maturity.

Perhaps, the humility comes from his simple background. Dhoni's father worked as a lower division clerk with Mecon, Ranchi. M S Dhoni has risen on the basis of sheer hard work and performance. In spite of being the captain of the high profile Indian team, Dhoni speaks with no airs, and shows no arrogance or attitude.

When Manmohan Singh won the 2008 trust vote the V for Victory sign was flaunted and smacked of arrogance. Every Indian must emulate Dhoni's handling of success. 8. India's next PM should be from the hinterland

I am reasonably sure (no offense meant) that an Indian captain brought up in a metro city might not have conducted himself so exemplarily.

Seeing a boy from Ranchi, who hails from Kumaon Uttaranchal, lead Team India successfully I wonder whether leaders from India's hinterland can relate to India better?

After all, the chief ministers of Chhattisgarh (Raman Singh), Gujarat (Narendra Modi) and Bihar (Nitish Kumar) are from similar backgrounds and doing outstanding work in their states.

While the rest of India criticises the Public Distribution System, the less hyped about Raman Singh government in Chhattisgarh has revolutionised the system to reduce leakages, and had made it work.

Can the cash-rich Board of Control for Cricket in India (BCCI) and Dhoni help the Indian hockey team win the next World Cup? Hockey is after all our national sport.

The author is a Mumbai-based Managing Consultant and Life Coach.