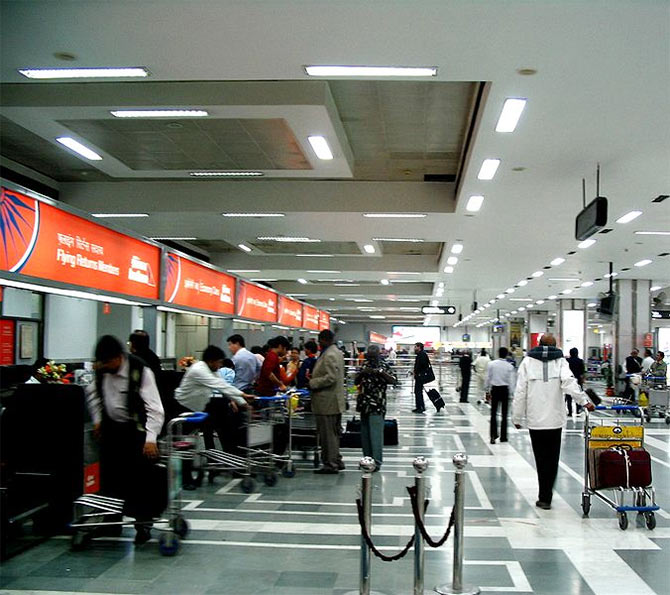 India has beautiful airports and amazing railway stations, but there are few flaws which need to be addressed, says Rahul Jacob.

In the midst of a 40-minute flight delay last Friday in New Delhi, I found myself curiously overwhelmed with a sense of gratitude.

The delay triggered memories of earlier flight reschedulings that had stretched for much of the day when Indian Airlines was the only airline India had and airports were (mis)managed by the government.

V S Naipaul famously described how the knowledge of where an Indian Airlines plane was coming from was a clue to when it would take off.

Armed with this insider information that was prized like a stock tip, we learned to scan the arrival information boards first.

I did it because everyone else did it, but really didn’t believe that any force other than fate could explain Indian Airline’s unpredictable comings and goings. 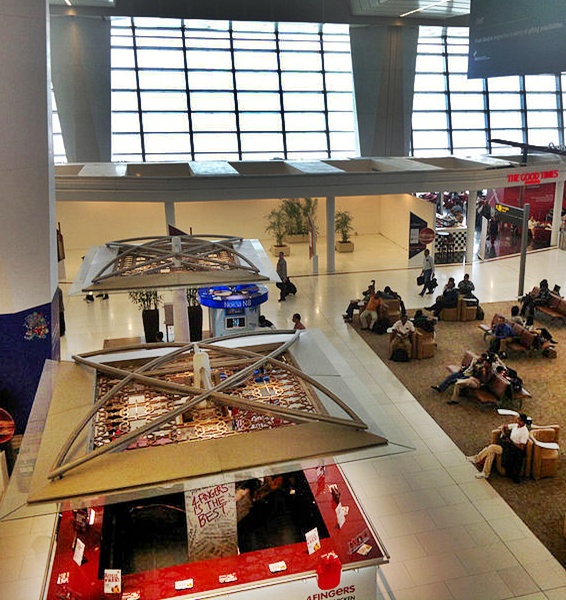 The airports were like grim holding pens with very little of the diversity of Indian food on display — other than the obligatory apple juice counters.

I remember a usually indomitable childhood friend who had travelled to all the former Soviet republics on work (she works with a development bank) calling once from the Delhi airport in near hysteria.

The men’s urinals had overflowed and rancid puddles had reached the baggage claim area.

That was then. As I surveyed the smaller of Delhi’s terminals, I marvelled at the retail distractions on display.

The week before, I had been able to buy a Maheshwari silk dupatta from the Fabindia outlet at the airport for the friend whose 50th birthday celebration I was attending. 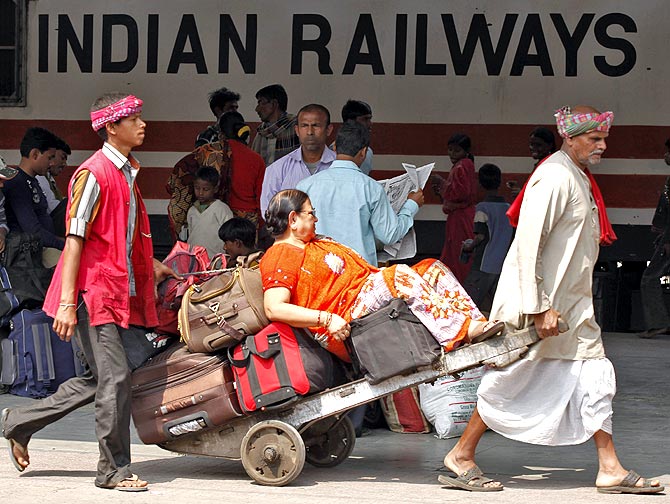 The contrast with our train stations, which seem stuck in time with the grime of decades past seemingly painted onto the platforms, could not be more stark.

I know the Shatabdis have their fans but I find the air-conditioning arctic and usually end up covering myself with newspaper as a makeshift blanket.

Across several aspects of life – from the far better job prospects for white-collar managers and techies vis-a-vis manufacturing workers to the ease of net banking to airlines – the fruits of liberalising the economy have gone disproportionately to the well-off. Look at our choice in cars: the recent demise of the Ambassador was something of a comic oddity; it would have seemed a calamity 30 years ago. 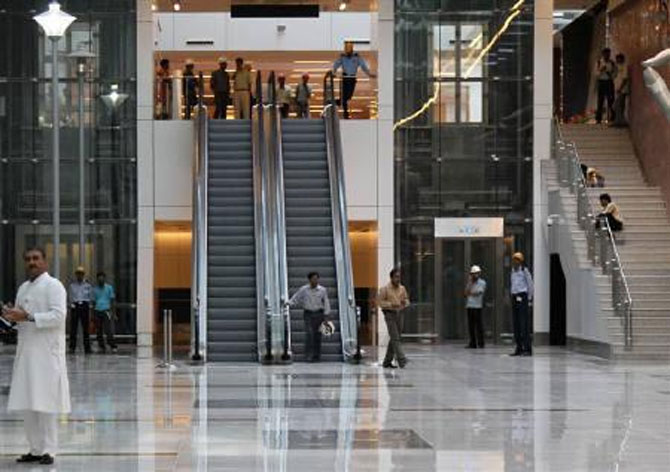 Last Friday at the Delhi airport, like so many in our country, I was surrounded by exhortations to buy things, but had no money.

I had emptied my wallet to pay my driver for the month, laughing off his gracious protestations that he could wait till I returned.

I replied that there were ATMs everywhere, only to find there are none once you have cleared security.

This turned out to be more of a problem than it should have been because the magazine store and nearly all the food outlets (except Kentucky Fried Chicken or KFC, which to my puritanical taste buds scarcely counts as food) either didn’t accept credit cards or had machines that weren’t working.

I felt briefly like I had slipped back to the socialist seventies. 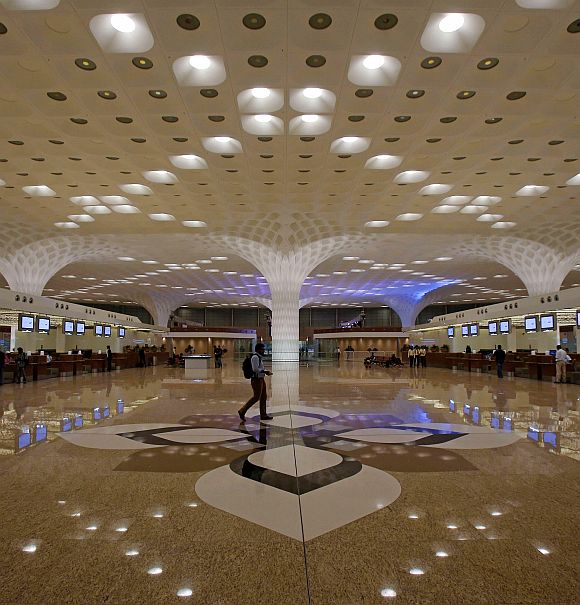 Long a misfit in malls, which is fundamentally what modern airports are today, I found not having a choice annoying and weirdly liberating.

When I got bored of drinking water from the dispenser, there was at least a young man offering free samples of Bru cold coffee.

Next to the Bru counter was a gorgeous sky blue Datsun Go, which the sales rep appeared to know almost nothing about, including the name of the car (I thought better of asking her why there was birdshit on the hood — indoors). No one seems to have time to train, even in our stagflationary economy.

The charming Bru rep was handing out cups of cold coffee, glibly saying it tasted like “badam milk”.

His replacement an hour later had abandoned the counter altogether, which became a self-serve operation, and was behind a pillar, nattering on her mobile phone. 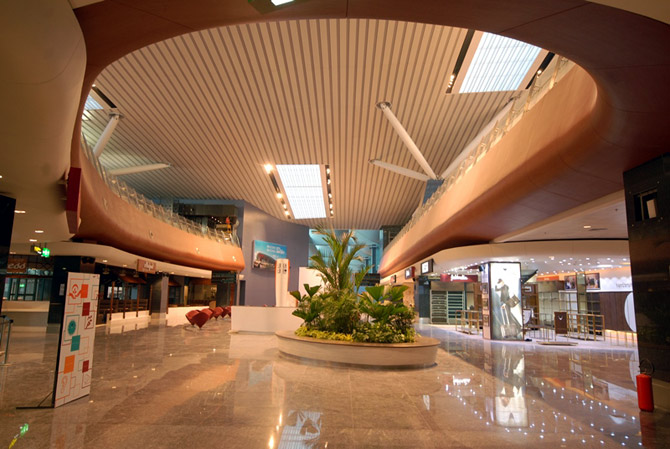 One can only pity the Indian marketing manager — or traffic cop for that matter. We are fundamentally anarchists, unable to follow a script.

When I went to the pantry on the flight to Bangalore to ask for a glass of water with which to take a Disprin,

I received a stern admonition for taking what the stewardess opined was “a very harmful medicine”.

It was entertaining, but I wondered which training manual included such information.

I arrived in Bangalore to an airport that runs like a Swiss clock.

The queue for taxis is the most orderly in India and the landscaping along the highway reminiscent of Singapore.

I was home in an hour, counting my blessings till I looked around. 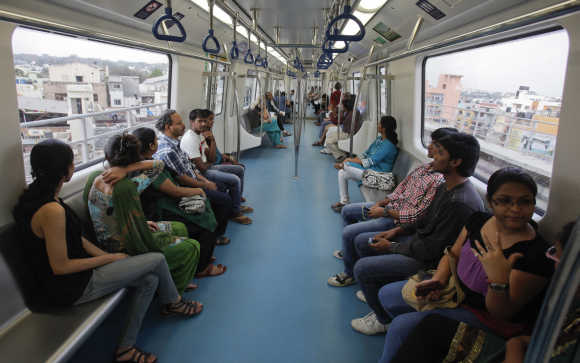 The supporting pillars for what we are promised will one day feature overground trains, look like they emerged from an archaeological excavation, but are only a couple of years old.

So much construction detritus and filth have been left behind by the construction crew for the Bangalore Metro that the street cleaners have understandably given up.

Pavements are more likely broken than not and garbage is everywhere. This was not the case before the construction of the metro started nearly a decade ago.

I have taken public transport all my working life but the one outside my front door depresses me.

It is not operational; less than 20 km of the Bangalore Metro is. This leaves me with the sinking feeling that I may land nowadays at a world-class airport, but I live in the midst of a dump.