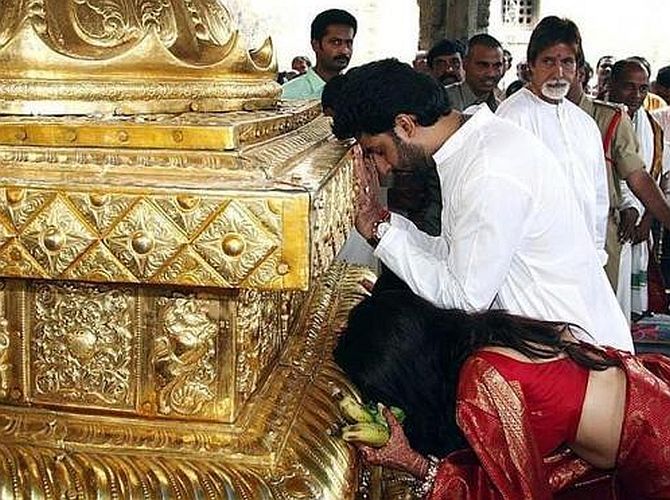 The richest Hindu temple in the world could soon come to the rescue of Prime Minister Narendra Modi's plan to recycle tonnes of idle gold and cut economy-hurting imports.

But the Sri Venkateswara Swamy Temple, popularly known as the Tirupati Temple that is believed to have been the abode of Lord Vekateswara for 5,000 years, may become the biggest contributor with more than 5.5 tonnes of gold.

"It's a good scheme," said Yanamala Ramakrishnudu, the finance minister of Andhra Pradesh, where the temple is located.

"We have already issued a directive to go for the scheme." India is the world's second-biggest consumer of gold after China and the country's insatiable appetite meant imports of the precious metal accounted for 28 per cent of India's trade deficit in the year ending March 2013.

Seeking divine blessings, devotees have offered billions of dollars worth of jewellery, bars and coins to temples over the centuries.

Most temples are secretive about their stash and their gold is often stored in subterranean vaults.

Tirupati has already deposited most of its gold with banks under previous monetisation schemes that offer interest of about 1 per cent, said D. Sambasiva Rao, executive officer of the trust that manages the temple.

"They (temple investment committee) will evaluate and whichever scheme is beneficial we are going to do that," he said, adding the temple will move its entire hoard to Modi's programme if convinced. The new scheme offers annual interest of up to 2.5 per cent.

Rao said the temple would take a final decision in the next 10-15 days.

The temple gets offerings of almost one tonne of gold every year and all of that could also be deposited under the new scheme once a decision is made, he added.

But Mumbai's two-century-old Shree Siddhivinayak temple, which is devoted to Lord Ganesha, remains unconvinced as banks accept deposits only after gold is melted down, leading to a potential loss in weight due to impurities.

The government remains hopeful individuals and institutions will participate in the scheme under which banks will melt the deposited gold and loan it to jewellers.

The scheme "will help in reducing our gold imports and save foreign exchange and deal with the problem of current account deficit", the finance ministry said in a statement on Friday.

India's DNA newspaper reported on Friday that India is planning to ban imports of 24-carat gold jewellery in an attempt to curb the misuse of free trade agreement with Asian countries.