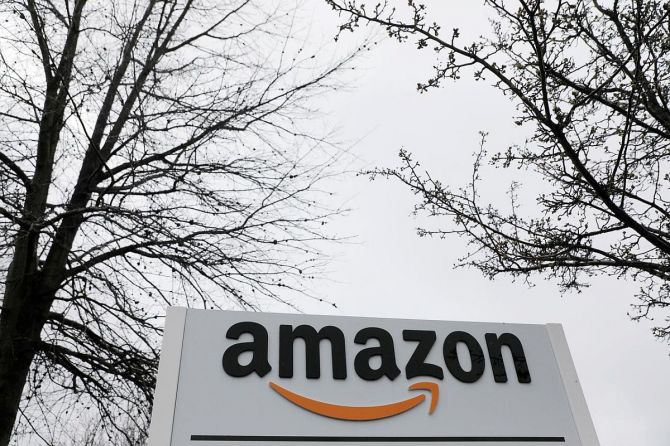 Last year in January at Amazon’s flagship event Smbhav, Infosys Co-founder N R Narayana Murthy had to shorten his keynote speech from 20 minutes to about five because the event was delayed by 1.5 hours.

“I will try to finish it in five minutes, because I am not used to delays,” said Murthy, while addressing hundreds of micro, small and medium enterprises (MSMEs) about building businesses that last.

In the audience was Amazon founder Jeff Bezos.

Murthy referred to Bezos’ prediction that the 21st century will be the Indian century.

The relationship between Murthy and Bezos dates to 2014, when Prione, a 49:51 joint venture (JV) between Amazon and Murthy’s venture capital company Catamaran, was formed.

In 2019, the JV was restructured after the government issued Press Note 2 stipulating that foreign e-commerce marketplaces cannot sell the products of their group companies on their platforms.

Following this, Catamaran Ventures increased its stake in Prione to 76 per cent, reducing Amazon Asia’s stake to 24 per cent.

Prione’s mission was to enable small and medium businesses (SMBs) to grow in e-commerce, which was at a nascent stage in India.

With operations in Bengaluru, Delhi and Mumbai, Prione has over 700 employees and has a reach in at least 150 Indian cities.

But a major chunk of Prione’s revenues came from its ownership of Cloudtail, one of the biggest and most profitable retailers on Amazon’s platform.

This month, concerted pressure from the government, powerful traders’ lobbies and regulatory scrutiny prompted Amazon and Catamaran Ventures to announce that it would discontinue the JV when it ends on May 19, 2022.

With this, Cloudtail technically ceases to be an Amazon group company, making it compliant with the foreign direct investment (FDI) e-commerce rules on paper.

With the country’s online market projected to soar to $1 trillion, this is a major setback for the American e-commerce giant.

“Cloudtail is one of the top sellers on Amazon across segments such as smartphones, consumer electronics, and fashion wear,” said Vasanth Rajasekaran, partner at Phoenix Legal.

“With Cloudtail out of the equation, Amazon’s business volume will fall considerably.”

According to a Reuters report, Cloudtail and Appario (see box) made up around 35 per cent of the platform’s revenue through sales in 2019. Overall, only 35 sellers on Amazon accounted for about two-thirds of its sale.

“For Amazon, losing its biggest asset in the e-commerce market battle will always cause a substantial impact on its working,” added Salman Waris, managing partner at technology law firm TechLegis Advo­cates and Solicitors.

The future of Cloudtail is uncertain, too.

“There would be a considerable dent in Cloudtail’s revenue with one of its biggest markets being shut down in such an abrupt manner,” said Rajasekaran.

Other analysts said this void should soon be filled by several other smaller sellers who had been muscled out by Cloudtail’s clout.

But Cloudtail also provided logistical, commercial and operations-based assistance to some 6,000 vendors that operated under it, including 700 registered MSMEs.

Without Cloudtail’s backing and its enormous operations, small sellers’ margins are bound to fall and the exposure to market fluctuations would increase.

According to industry sources, Amazon is building multiple smaller seller platforms and Cloudtail’s business may move to them.

Also, people in the know said Amazon may appoint several independent sellers or reach out to large brands to take over the business from Cloudtail.

Cloudtail may even be sold to other players.

So where does this leave Cloudtail?

“Cloudtail may continue to be a vendor on Amazon, without Amazon violating any FDI requirements relating to its ownership in Prione, which owns Cloudtail,” said Anu Monga of AnantLaw.

She said Catamaran, being a venture capital company, does not stand to face any adverse consequences.

Only Amazon, which operates as an e-commerce marketplace, was required to comply with FDI norms.

But Catamaran’s revenues from Cloudtail are likely to be constrained as well.

Amazon had been facing the heat from various Indian regulatory bodies of late.

The Consolidated FDI Policy of the ministry of commerce and industry, brought into effect from 15 October 2020, has restricted companies with FDI in engaging in retail trading by means of e-commerce.

Recently, the Enforcement Directorate initiated an investigation against Amazon for violation of various provisions of the Foreign Exchange Management Act (FEMA).

Sajai Singh, partner at law firm J. Sagar Associates (JSA), believes the dissolution of the JV was partly driven by the need to save face.

Trader associations have alleged that Murthy, who stood for the Indian industry, is profiteering through a JV that was purportedly set up to support cottage and marginalised industries.

“Neither Bezos nor Murthy would consciously like to have their image tarnished.

"Their experiment was a huge success and maybe it is time to pay heed to what small traders are saying and not renew a relationship that may have run its course,” said Singh.

“They’ve tried to comply with the law when it changed, and I am sure they would continue to comply if it changes again.

"It’s just that both the stalwarts and their investments are under such strong media scrutiny that it may affect the viability of the effort.”