A mix of financial and strategic mistakes combined with poor expectations of the management are the reasons for the downfall of Indian airlines.
For Jet, the deathly potion was even more toxic on account of the bitter squabbles between promoter Naresh Goyal and strategic partner Etihad Airways. 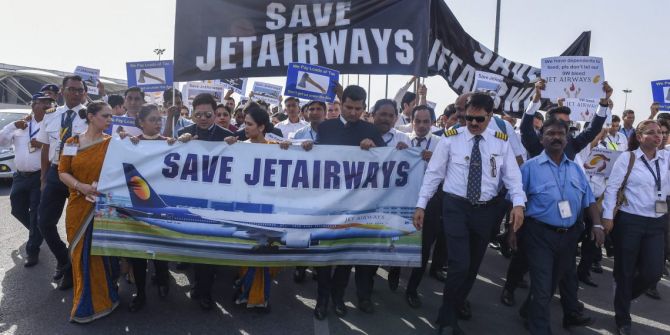 It is flashback time for many.

Protesting employees, irate customers, devastated families clamouring for compensation and justice - the scenes playing out in the aftermath of the Jet Airways debacle evoke a sense of déjà vu, drawing instant comparisons with the long list of airline brands that have found their way to graveyard.

Why are Indian airlines so vulnerable?

And why did Brand Jet collapse, within twelve months of celebrating its silver jubilee?

A mix of financial and strategic mistakes combined with poor expectations of the management are the reasons for downfall, say marketing and branding experts.

For Jet, the deathly potion was even more toxic on account of the bitter squabbles between promoter Naresh Goyal and strategic partner Etihad Airways.

Airlines have no control over cost, especially fuel (which accounts for 30-40 per cent of all expenses) and taxes.

What it does control is the product and service.

"From its inception the service philosophy was clear, the customer at the back of the plane should not feel inferior to those in the business class seat in the front.

"For many years the airline offered services like choice of North and South Indian meal options, pillows and blankets for passengers.

"The airline's brand and brand experience was successful but in business management it was a failure,” said K V Sridhar, founder and chief creative officer, Hyper Collective.

Sridhar was a part of the team at Lintas which designed Jet’s ‘flying sun’ logo and its first campaign.

For Ambi Parameswaran, founder of Brand-Building.com, price wars and an inability to charge a premium caused Jet's downfall.

Low cost airlines drove down the price threshold to the point that it was untenable for Jet.

The airline management could have relied more on data to price its products differently from peers, he said.

“A good brand image cannot save a poor balance sheet.

"In the last ten years Jet made profits only twice and has been surviving on borrowed funds.

"Kingfisher Airlines had the same problem as it tried to offer better services but could not command a premium,” he said.

Sridhar does not see price wars as critical and blames the crisis on strategic mistakes and an entrepreneur's ego.

The problem was the purchase of Air Sahara in 2007.

“Jet's wage and debt and maintenance costs have always been high.

"I do not think the inability to charge a premium was a big issue.

"When ­­­the inventory is high and airlines are adding capacity it is difficult to seek a premium,” he said.

Like Sridhar many blame the debacle on Naresh Goyal, the man whose story reads like a fairy tale.

He sold seats and cargo loads for other airlines as a general sales agent and then went on to  launch Jet Airways in 1993.

It was not the first private domestic airline of that era, but the only one to survive till date.

Goyal attracted the best talent for his airline, giving it an edge over the rest in terms of the service it offered.

Aviation consultant Vishok Mansingh says over 30 scheduled, non-scheduled and cargo airlines in India have shut down in last three decades largely due to mismanagement, inadequate funding and absence of long term planning.

“Margins are thin and there is no room for inefficiencies,” he said.

Shashank Nigam, CEO of aviation brand strategy firm SimpliFlying says airlines like Jet Airways and Kingfisher perished in their attempt to please everyone.

Both got into the low cost space in addition to a full service offering, leading to brand confusion.

Eventually Jet adopted a single brand strategy but it was too late.

“Costs were too high and profits were determined primarily by the competition and externalities like fuel prices.

"The most consistently profitable have kept their brand promise very simple.

"It may not resonate with everyone, but those who fly these airlines are die-hard fans.

"The key to be a successful airline in India lies in building a strong brand promise and then staying true to it,” Nigam said.