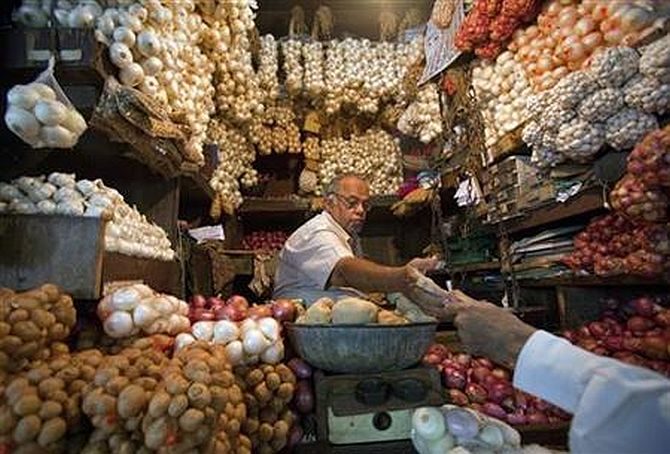 Wholesale prices based inflation surged to an eight-month high of 2.59 per cent in December, as against 0.58 per cent in November due to sharp rise in prices of food articles like onion and potato.

The annual inflation, based on monthly wholesale price index (WPI) was recorded at 3.24 per cent in April 2019.

Build up inflation rate in the financial year so far was 2.42 per cent compared to a build up rate of 2.92 per cent in the corresponding period of the previous year, as per data released by the Office of Economic Adviser, Ministry of Commerce & Industry on Tuesday.

The rate of price rise for food articles rose to 13.12 per cent during December as against 11 per cent a month earlier, while for non-food articles it rose nearly four-fold to 7.72 per cent from 1.93 per cent in November.

Onion prices ruled above Rs 100 per kg in various markets till recently because of crop damage due to excessive rains. However, prices have started to move southwards with fresh crop arrival and imports.

The consumer price index (CPI) based retail inflation, as per data released on Monday, spiked to over a 5-year high of 7.35 per cent in December due to costlier food products.

The unexpected jump in inflation diminished the chances of the RBI cutting interest rate at its next monetary policy review due in early February.

Experts feel CPI is expected to further harden next month due to elevated price level of food prices mainly vegetables.

"We now expect inflation to breach 8 per cent in January and then start bottoming out.

“However, this jump in inflation will perforce the RBI to relook at the inflation trajectory but in our view any change to a possible change in stance could be unwarranted as we find compelling evidence of significant slowdown in discretionary consumption," SBI Economic Research Department said in a report.

It further said RBI missed the bus in cutting rates in December and if food prices remain elevated, there is a fear of economy slipping into stagflation, which indicates low growth and high inflation.

This means RBI will possibly remain on hold in 2020, going by current trends.

For manufactured products, the wholesale inflation cooled marginally (-) 0.25 per cent during the month under review. Fuel and power, as a category, too continued to show deflationary trend at (-) 1.46 per cent as against (-)7.32 per cent.

The rate of price rise in primary articles as a grouping rose to 11.46 per cent from 7.68 per cent a month earlier.

Primary articles, which have a weightage of 22.62 per cent in the wholesale price index, broadly comprise of food articles, non-food articles, minerals and crude petroleum and natural gas components.

"Although the core-WPI remained in disinflation for the fifth consecutive month, the pace of the same narrowed to 1.5 per cent in December 2019, from 1.9 per cent in November 2019.

“This trend is expected to continue over the next two quarters, with the core-WPI likely to emerge out of disinflation only in second half of 2020," she said.

Even if food prices record some correction, an unfavourable base effect will push up the headline WPI inflation further in January 2020, she added.

a
Source: PTI  -  Edited By: Nandita Mallik© Copyright 2020 PTI. All rights reserved. Republication or redistribution of PTI content, including by framing or similar means, is expressly prohibited without the prior written consent.
SHARE THIS STORY
Print this article

Only hallmarked gold jewellery to be sold from Jan '21