Nearly 700 of the 1,500 employees, who still claim to be on the payroll of the defunct airline, are women. 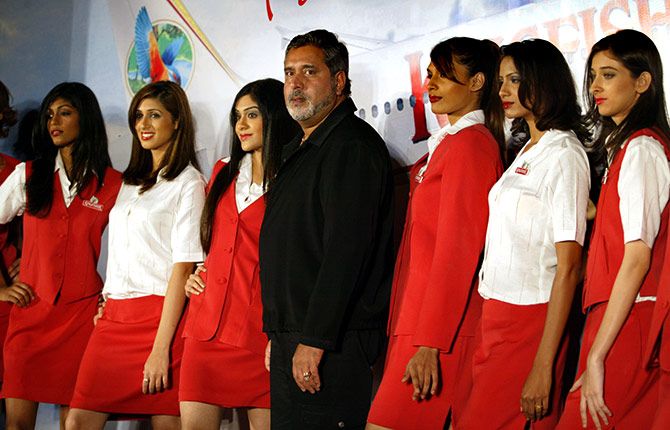 Questioning his stoic silence over non-payment of salaries to hundreds of employees of the now-defunct Kingfisher Airlines, a section of former women staffers has accused its chairman Vijay Mallya of misleading government and the employees on the revival plan.

In an open letter, which comes on the occasion of International Women's Day, the women employees have also accused the beleaguered industrialist of "killing" two airlines and rendering hundreds of people jobless.

"You say that you are not a defaulter. But you confidently told us during the meeting that banks won't be able to recover more than 5-10 per cent of debt amount. That speaks volumes of your malicious intentions.

"In the same meeting, you promised revival, payment of our salary... This clearly means that you had no intention of reviving the airline while you kept submitting misleading revival plans to banks/DGCA," the women staffers alleged in the letter.

According to sources, nearly 700 of the 1,500 employees, who still claim to be on the payroll of the defunct airline, are women.

The open letter comes when a consortium of PSU banks have moved Supreme Court seeking a direction that Mallya not be allowed to leave India. The apex court has agreed to hear their plea on Thursday.

A Debt Recovery Tribunal (DRT) had yesterday barred Mallya from accessing USD 75 million severance package from Diageo till the loan default case with State Bank of India is settled.

Diageo and United Spirits Ltd, owned by the UK-based firm, have also been asked by the DRT in Bengaluru to disclose details of the agreement they have come to with Mallya.

SBI, which leads the consortium of 17 banks that lent money to the erstwhile Kingfisher Airlines, had moved DRT against Mallya in its bid to recover over Rs 7,000 crore (Rs 70 billion) of dues from him.