Swarms of immature pink locusts and adult yellow locusts are currrently active. Not only are fresh locusts swarms expected to arrive in the coming weeks, but even those already present in India have mated and are breeding new offspring. It has been more than three months since the second wave of locusts hit India after the first attack earlier this year.

However, so far there are few signs that the menace is abating and if the Food and Agriculture Organization (FAO)'s latest advisory is anything to go by, the problem of locusts is expected to get worsen, going ahead.

This is because of new breeding the Horn of Africa, and fresh swarms are likely to move towards the India-Pakistan border in the coming weeks.

This may have serious implications for farmers, particularly in the worst-affected western parts of Rajasthan, where they lean heavily on monsoon kharif output due to paucity of water in the remaining months of the year.

Pearl millets, pulses, moong and moth are some of the main crops under threat due to the locust menace.

Though the government claims no significant crops loss has been reported so far from anywhere in the country except some parts of Rajasthan, experts said the fear will linger unless the locusts are completely brought under check.

Not only are fresh locusts swarms expected to arrive in the coming weeks, but even those already present in India have mated and are breeding new offspring.

Therefore, even if hypothetically no new locust swarms come from the Horn of Africa and countries such as Somalia in the next few weeks, the problem will not go away.

“In India, adult groups and swarms are maturing throughout Rajasthan where laying is underway in many areas.

"So far, a few hopper groups and bands have formed but substantial hatching is expected in the coming weeks,” FAO said in its latest advisory on desert locusts.

Till July 20, the Central government claimed that field operations to control locusts has been carried out in almost 200,000 hectares of land Rajasthan, Madhya Pradesh, Punjab, Gujarat, Uttar Pradesh, Maharashtra, Chhattisgarh, Haryana, Uttarakhand and Bihar by state and central governments.

So, what exactly are locusts and why are they so harmful to crops, even as they don’t harm human beings?

The characteristics of desert locusts 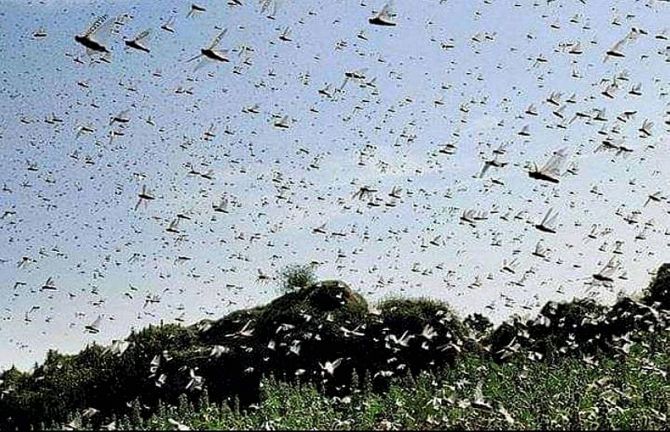 Locusts are insects that belong to the family of grasshoppers.

FAO considers them as the oldest migratory pests in the world, with the desert locust being the "most devastating" of them all.

Locusts are usually solitary and harmless.

But, certain environmental conditions such as prolonged monsoon and heavy cyclones help them reproduce faster – almost 20-fold within three months.

As per FAO, an adult locust can eat a quantity equal to its weight – about two grams – every single day.

However, a single square kilometer of the swarm can contain somewhere between 40-80 million adult locusts.

Therefore, if a swarm forms in the Horn of Africa and moves towards western Rajasthan via Iran and Afghanistan, it should take just 5-7 days for it to reach.

A desert locust lives for about three to five months.

Studies show that a locust swarm the size of Paris eats the same amount of food in one day as half the population of France; the size of New York City eats, in a single day, the same quantity as everyone in New York and California.

But, yes, locusts don't attack human beings or animals and feed only on green crops. Though not yet conclusively proved, experts say there is direct link between climate change and increase in locust attacks.

The World Meteorological Organization (WMO), a specialised agency of the United Nations, recently said extreme weather events and climatic changes such as increases in temperature and rainfall over desert areas, and strong winds associated with tropical cyclones, provide a new environment for breeding, development and migration of pests such a locusts.

Citing an article in Nature Climate Change, WMO said while desert locusts have been around since biblical times, recent intense outbreaks can be linked to anthropogenic climate change and the increased frequency of extreme weather events.

“Attribution of a single event to climate change is difficult. However, climatic changes such as increases in temperature and rainfall over desert areas, and the strong winds associated with tropical cyclones, provide a new environment for pest breeding, development and migration.

"This suggests that global warming has played a role in creating the conditions required for the development, outbreak and survival of the locusts,” said scientists at the Intergovernmental Authority on Climate Prediction and Applications Centre (ICPAC).

ICPAC, is a designated regional climate centre of the WMO.

The article cited Indian Ocean warming, intense and unusual tropical cyclones in the region and heavy rainfall and flooding as playing a key role in the proliferation of the pests.

“The recent locust outbreaks and the role of Indian Ocean warming show that the impact of climate change is not merely the consequence of changes in mean temperature, but also of increases in extreme and unprecedented events,” the article said.

Experts say locusts attacks in India usually last till November, but this year the swarms stayed on till February, as monsoon got extended providing natural vegetation for the pests to feed on and create ideal breeding conditions. So far, till July 21, the Central government claims that it, along with state agencies, has performed locust control operations on almost 200,000 hectares of land in about 10 states during the past four months.

As on date it has also deputed 104 control teams with spray vehicles in Rajasthan, Gujarat, Madhya Pradesh and Uttar Pradesh, while more than 200 central government personnel are engaged in locust control operations.

India has also imported new 45 Ulvamast sprayers from the United Kingdom, of which 15 have already reached India and another 30 are on their way.

These high-capacity sprayers can cover large areas in one filling.

In addition, five companies with 15 drones have been deployed at Barmer, Jaisalmer, Bikaner, Nagaur and Phalodi in Rajasthan for effective control of locusts on tall trees and in inaccessible areas through spraying of pesticides.

India is the first country to use drones for locust control.

Aerial spraying capacity has also been strengthened for anti-locust operations.

A Bell helicopter has been deployed for use in Rajasthan's affected areas as per the need.

In addition, weekly virtual meetings on desert locusts of South-West Asian countries (Afghanistan, India, Iran and Pakistan) are being organised by FAO.

So far, 15 such meetings of technical officers from South-West Asian countries have taken place on ways and means to control the pests.

Despite all the measures, however, locusts have stubbornly refused to leave. As locusts continue to wreak havoc in several parts of country despite best efforts, farmers groups and experts have called for declaring the attacks as a natural calamity, given their scope, spread and intensity.

This is because, though locusts have been attacking India for decades, this year’s infestation is among the worst in recent times.

That apart, several farmers groups have demanded adequate compensation to mitigate their losses and the incident should be included under the Pradhan Mantri Fasal Bima Yojana (PMFBY) so that crops can be insured.

“To me, the efforts made so far have been not up to the mark and a more coordinated approach between the Centre and states needs to have been there,” Bhagirath Choudhury of the South-Asia Biotechnology Centre (SABC), a not-for-profit organisation working in the field of science and agriculture, told Business Standard.

He said the problem has become chronic now because early warnings were ignored by the government.

“Had there been adequate coordination and measures from the time locusts were first sighted, such a situation would never have arisen,” he said.

He said now that locusts have come and are not showing any signs of abating despite several measures for the past four months, the government should strengthen its coordination with states and neighbouring countries, so that control measures can be taken on time.

“We shouldn’t be chasing the locusts as we are doing now, but should pre-empt their movement instead,” he said.

Now that the menace is getting worse, the government should seriously consider compensating farmers for the loss they have incurred, and including locusts attack under the Pradhan Mantri Fasal Bima Yojana, Choudhury said.

“Or else, farmers will suffer big losses because, as per all information, new swarms are coming from Africa,” he said.