Faced with prospect of its assets across the globe being seized just like Pakistan and Venezuela, the government decided to scrap retrospective taxation but the international embarrassment could have been avoided had 'attached' shares of Britain's Cairn Energy Plc not been sold, according to tax and legal experts. 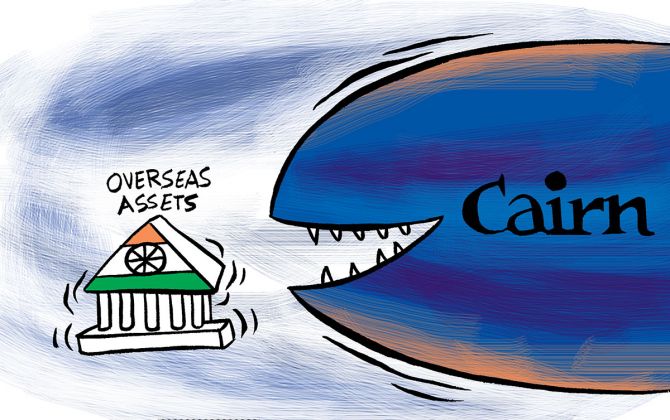 On Thursday, the government introduced a Bill in Parliament to scrap the tax rule that gave the tax department power to go 50 years back and slap capital gains levies wherever ownership had changed hands overseas but business assets were in India.

The 2012 legislation was used to levy a cumulative of Rs 1.10 lakh crore of tax on 17 entities, including UK telecom giant Vodafone, but substantial punitive action was taken only in the case of Cairn.

The income tax department not just sold Cairn's near 10 per cent shareholding in its erstwhile Indian subsidiary but also seized its dividends totalling Rs 1,140 crore and stopped tax refunds of Rs 1,590 crore.

"The shares the firm held in Cairn India (renamed Vedanta Ltd) were attached by the income tax department soon after it served an initial assessment of Rs 10,247 crore tax demand on Cairn Energy in January 2014.

"Most of these shares were sold within two years of serving a formal tax demand in March 2015," a leading tax expert said, requesting not to be identified.

The tax department reasoned the decision to the fact that Cairn had begun the process to sell its residual stake in 2014 and the company would have fled the country after that, leaving no avenues to recover the levy.

"But, what is being overlooked is the fact that Cairn couldn't have sold the shares as they were already attached by the tax department.

"They would have remained in its possession till the final conclusion of any or all legal processes," he said.

Once the December 2020 ruling of the international tribunal on the arbitration initiated by Cairn came overturning the levy of taxes on the reorganisation of India business that Cairn carried in 2006 before listing the local unit, "the government could have just released those shares and the matter would have ended," he said.

E-mails sent to the finance ministry as well as the Central Board of Direct Taxes (CDBT) seeking comments remained unanswered.

"There is no right or wrong decision. Decisions are bad or good. The share sale decision was a bad one," another legal expert said.

The government refused to accept the arbitration award which asked India to return the value of shares seized and sold, dividend confiscated and tax refund withheld, totalling USD 1.2 billion plus interest and penalty.

This forced Cairn to identify USD 70 billion of Indian assets from the US to Singapore to enforce the ruling, including taking flag carrier Air India Ltd to a US court in May.

A French court last month paved the way for Cairn to seize real estate belonging to the Indian government in Paris.

The finance ministry has said it will refund Rs 8,100 crore recovered from entities against whom retrospective tax demand was raised. Of this, Rs 7,900 crore was from Cairn.

Finance Minister Nirmala Sitharaman insisted that the government was fulfilling its 2014 promise of scrapping the draconian law frame by the previous Congress-led UPA government.

However, the tax department has in four years of arbitration proceedings held that the tax demand on Cairn was not a result of retrospective tax legislation but its own assessment that began in years prior to 2012, the December 21, 2020, arbitration award showed.

While the tax department levied short-term capital gains on the value that the over-a-decade-old India business had generated and transferred into a new unit, Cairn India, the British firm, all this while maintained that there existed no tax on such reorganisation which was also approved by all regulatory authorities in 2016.

Had there been a tax, it would either have restructured the business differently or paid tax, it argued.

The new Bill was approved by the Lok Sabha on Friday and now moves to Rajya Sabha before it becomes a law.

Mukul Bagla, chair of direct tax committee, PHDCCI, said: "It is felt that if such an amendment was made immediately after India lost the arbitration award, the Indian government's intention to be fair in all taxation matters would have been appreciated much more globally. However, better late than never, this Bill shall improve India's reputation substantially as a fair and equitable taxing nation."

Himanshu Parekh, partner (tax) at KPMG in India, said the move will help curtail long-drawn litigation on the aspect of indirect share transfers undertaken prior to May 28, 2012, and provide tax certainty to multinational companies (MNCs).

J Sagar Associates Ppartner Kumarmanglam Vijay said this was a pragmatic step and should help contain the widespread litigation in cases similar to Vodafone and Cairn.

Sonam Chandwani, managing partner at KS Legal & Associates, said: "It's a welcome move because it will encourage foreign companies, who have had a nightmare with the government in the past and have spent heavily on legal costs."

The 2012 retrospective tax law was enacted after the Supreme Court in January that year rejected proceedings brought by tax authorities against Vodafone International Holdings BV for its failure to deduct withholding tax from USD 11.1 billion paid to Hutchison Telecommunications in 2007 for buying out its 67 per cent stake in a wholly-owned Cayman Island-incorporated subsidiary that indirectly held interests in Vodafone India Ltd.

Ammar Zaidi in New Delhi
© Copyright 2022 PTI. All rights reserved. Republication or redistribution of PTI content, including by framing or similar means, is expressly prohibited without the prior written consent.