US firms going abroad can't say 'bye-bye and fire everybody'

President Donald Trump has warned of "consequences" to American companies planning to shift base abroad, telling them that he would make it "harder" for them to just say "bye-bye and fire everybody." 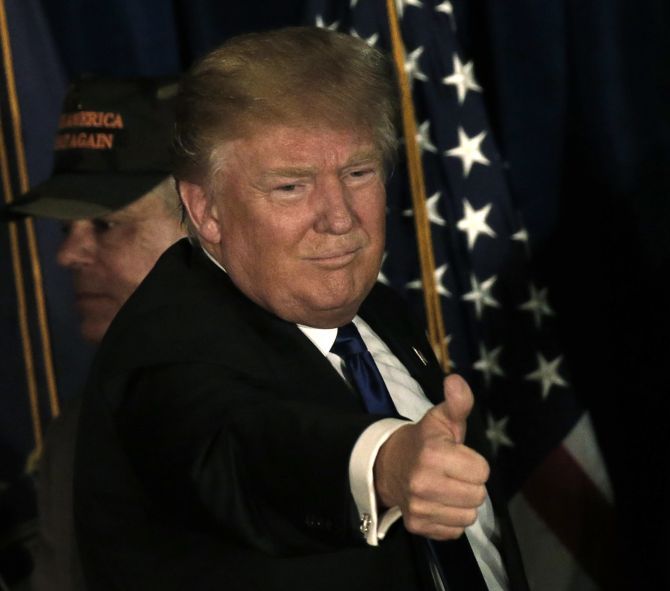 In his weekly address to the nation, Trump also said that he is working on a major tax reform which would massively reduce taxes of American workers and businesses.

"We are in the process right now of working on a major tax reform that will massively reduce taxes on our workers and businesses," Trump said.

"We want to make it much easier to do business in America, and that's what we're going to do. We're going to make it also much harder for companies to leave. They're not just going to say bye-bye and fire everybody. There will be consequences," he said.

Trump said, he met the CEO of Intel (Brian Krzanich) this week, who announced that his company will invest $7 billion in a new manufacturing facility in Arizona, creating thousands of new American jobs.

"That's what we want, new American jobs and good jobs. Intel decided to move forward with this project because they know we are totally committed to lifting the regulatory and tax burdens that are hurting American innovation and companies," he said.

Trump said he want America to be the greatest jobs magnet of the world.

"But we can't do that if we don't stop the wasteful rules and excessive taxes that make it impossible for companies to compete," he said.

Every hour of every day, his administration is focused on creating jobs for people, Trump said.

Referring to his meeting with sheriffs and police chiefs from across the country, Trump said his administration is committed to national security, which is why he will continue to fight to take all necessary and legal action to keep terrorists, radical and dangerous extremists from ever entering the country.

"We will not allow our generous system of immigration to be turned against us as a tool for terrorism and truly bad people We must take firm steps today to ensure that we are safe tomorrow," Trump said.

"We will defend our country, protect our Constitution and deliver real prosperity for our people," he said.